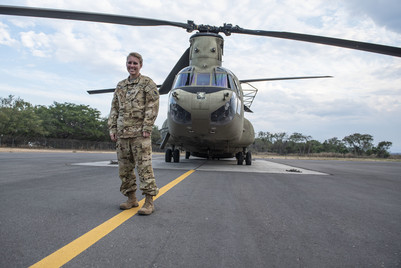 Not many jobs hold as much appeal as that of a pilot. The freedom, the blue skies and the adventure draws people from all walks of life to find a way to get their flying license. Often times, those wide-eyed dreamers find a recruiter’s office to be a great avenue for their aspirations.

Since around age ten, Jennifer West has wanted to be an army pilot.

“I was a nerd as a kid,” said West. “Reading about the history of the United States and how the military played a role, I thought, ‘What a great organization to be a part of and what a great way to serve your country.’”

The aspiring pilot set off to accomplish her goals starting in high school when she joined the Junior Reserve Officers’ Training Corps, a program designed to prepare students for a potential military career.

While in JROTC, she was further inspired by her instructor, a retired command sergeant major who worked with UH-1 Hueys in Vietnam. As an early mentor to future Capt. West, the instructor would go on to help her get into the U.S. Military Academy at West Point and set her on the path to success.

“I was already interested in being an aviation officer so I went to the academy with the hope and dream that I would become one,” said West. “That drove my determination and was my motivating factor to do well in school.”

Hearing the stories of her instructors in the aviation branch only furthered her commitment to get her wings. At the end of her time at the academy, the senior class gathered to receive their branch assignments together.

“I was high enough in my class to have a pretty good idea that I was going to get aviation, but seeing the insignia on the card, it was the best reward I could get for all the hard work over the years and a dream come true for me,” said West.

Describing her aviation career as a unique experience, West explained she began her journey with the OH-58 Cairo Warrior, a light-weight reconnaissance helicopter, which she flew in Hawaii and South Korea. Unfortunately, the bird was retired from the active-duty inventory and the pilots were re-assigned aircraft.

“We were selected for alternate aircraft. Some of us went to the (AH-64 Apaches), some of us went fixed-wing and I was able to choose the CH-47 Chinook,” said West. “I’ve always thought the Chinook was an incredibly powerful aircraft with how it’s able to manipulate the environment on the ground with what it can carry, whether that’s carrying 30 people in the back or moving entire companies of artillery, it’s able to change the terrain of the battlefield very quickly.”

Although the actual flying aspect was a quick transition, West said learning the new mission set took a while, going from an attack-reconnaissance mindset and working with one other pilot to a heavy-lift mindset and having an entire crew by her side.

After jumping into the Chinook world with both feet ahead of her, West quickly distinguished herself at her next assignment at Soto Cano Air Base, Honduras. Starting as the assistant S3, she stood out as a pilot and eventually became the commander of the 1st Battalion 228th Aviation Regiment’s Bravo Company, also known as the “Sugarbears.”
West said it’s a unique assignment and very rewarding seeing the impact of her work on partner nations and U.S. forces in the region.

“CPT West made an immediate impression on me when I personally witnessed her capabilities as an aviator in the CH-47,” said Lt. Col. Christopher Cook, 1-228th Avn Regt. commander. “When flying, she capitalizes on each opportunity to train junior aviators on the specific systems and capabilities of the aircraft. Her outstanding technical proficiency instills confidence in her company and enables her to easily lead her company as a tactical and technical expert.”

West is about to celebrate her 1000th flight hour in the Chinook and recently oversaw the movement of nearly a million pounds of equipment in Operation Darien Lift. Many leaders on base see bright things in the Sugarbear commander’s future, including her next assignment as a “Nightstalker” in the elite 160th Special Operations Aviation Regiment.

“How army aviation assets support the ground forces is an awe-inspiring mission to be a part of and the fact that you get to dominate from the skies was even more of a wow-factor for me,” said West, who is gearing up to focus on her next assignment and has her sights set on eventually commanding a battalion.