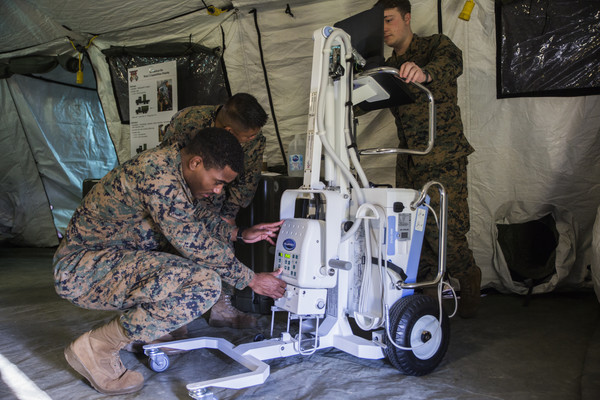 CAMP FOSTER, Okinawa, Japan— When Sailors and Marines come together they can take a large empty field and, in a day of hard work, transform it into a medical field hospital complete with camouflage netting, medical and utilities equipment that can provide necessary life-saving functions within field environments.

The medical field hospital, known as Role II, was on display Nov. 26-30, 2018 at Camp Foster, Okinawa, Japan so that 3rd Medical Battalion, 3rd Marine Logistics Group Marines and Sailors could demonstrate their knowledge and proficiency of successfully deploying and employing a Role II facility.

“This is a large set up. We have nine tents not including our utilities tents, and we have lots of camouflage netting that all adds up to 23,000 pounds of equipment not including the utilities equipment,” said May. “We started set up yesterday at 7:30 a.m. and despite some bumps in the road we completed it at about 6:00 p.m. yesterday, and I couldn’t be happier.”

The Role II medical field hospital is designed to provide emergency care including, shock trauma care, emergency surgeries and laboratory work. The 3rd Medical Bn. is the only unit inside III MEF with this Role II capability.

Each day, different displays demonstrated the abilities of the surgeons, shock trauma care and Preventive Medicine.

May said, he is ecstatic with how the Sailors and Marines performed in the set-up and execution of the Role II display.

Mattis: Bush Taught Others to Live ‘A Life without Regret’