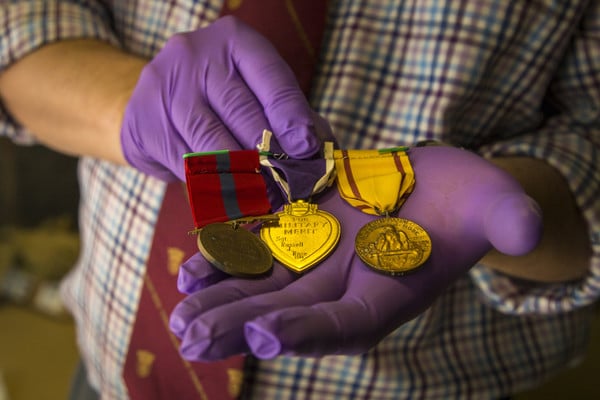 During the Korean War, Marine Corps prisoners of war (POW) in captivity spent time devising ways to let the outside world know their status and situation, but it proved a difficult task to relay information from their imprisonment. As Marines, each had to be creative.

These POW Marines used cigarette paper and ink made of vegetable oil drained from food to scribble lists that documented the status of all the Marines imprisoned. They would then proceed to shove the information into shaving cream cans, which they then found a way to deliver outside the prison camp.

Today, these cigarette paper accountability lists, among various other artifacts preserved for decades by the Camp Pendleton History Museum Branch, trace the people and times of the horrible history least we forget. For the past several decades however, these historical artifacts resided in the Camp Pendleton area, but soon will travel east and allow their stories to be told to a wider audience at the National Museum of the Marine Corps.

The National Museum of the Marine Corps recently visited Camp Pendleton to analyze and inspect historical artifacts of interest, which they will take back with them to show them at galleries opening later in 2019 and 2020 at the museums location in Quantico, Virginia.

“We are just trying to be the best stewards for the Marine Corps history that we can be by saving as much of these items that tell the stories of Marines and their role in the legacy of the Marine Corps,” said Owen.

Some of these historic artifacts were uniform items. Through the name tapes on these uniforms, which some have been damaged and weathered, historians from the National Museum of the Marine Corps have been able to identify names of the Marines that owed these uniform items and tracked the service records. Through these findings they are able to tell the personal service career stories of these Marines.

Updates to the workforce from the commandant