Rosamond Johnson Beach honors an African American hero who was killed in action serving in the U.S. Army during the Korean War. The beach is situated on the east side of Perdido Key, and is part of Gulf Islands National Seashore. (US Navy photo by Joshua Cox, NAS Pensacola Public Affairs Office/Released)
July 13, 2020 Editorial Staff
Share
Tweet
Flip

Editorial Note: Rosamond Johnson Beach is a public area Sailors and their families are encouraged to visit when COVID-19 restrictions are lifted. Due to Navy guidance related to the extraordinary COVID-19 pandemic, Sailors are not currently authorized to visit the historic beach. However, the NAS Pensacola Public Affairs Office is committed to reporting on subjects and areas in and around the base with historical significance and a connection to the installation. We encourage service members and their families to learn more about Johnson Beach and explore the area when conditions improve.

A popular destination for beachgoers, fishermen, and people seeking recreation near the water, Rosamond Johnson Beach honors an African American hero who was killed in action serving in the U.S. Army during the Korean War. This beautiful beach is as rich as it is in history as it is in beauty. The beach is situated on the east side of Perdido Key, and is part of Gulf Islands National Seashore.

Pvt. Rosamond Johnson Jr., a Pensacola native, was born on May 18, 1933. He enlisted in the U.S. Army at only 15, lying about his age to support his family, according to the National Park Service. Johnson, a member of the 24th Infantry who was stationed in Japan during the Korean War, died after successfully carrying two wounded soldiers to safety. Johnson was rescuing a third comrade when he was fatally wounded. 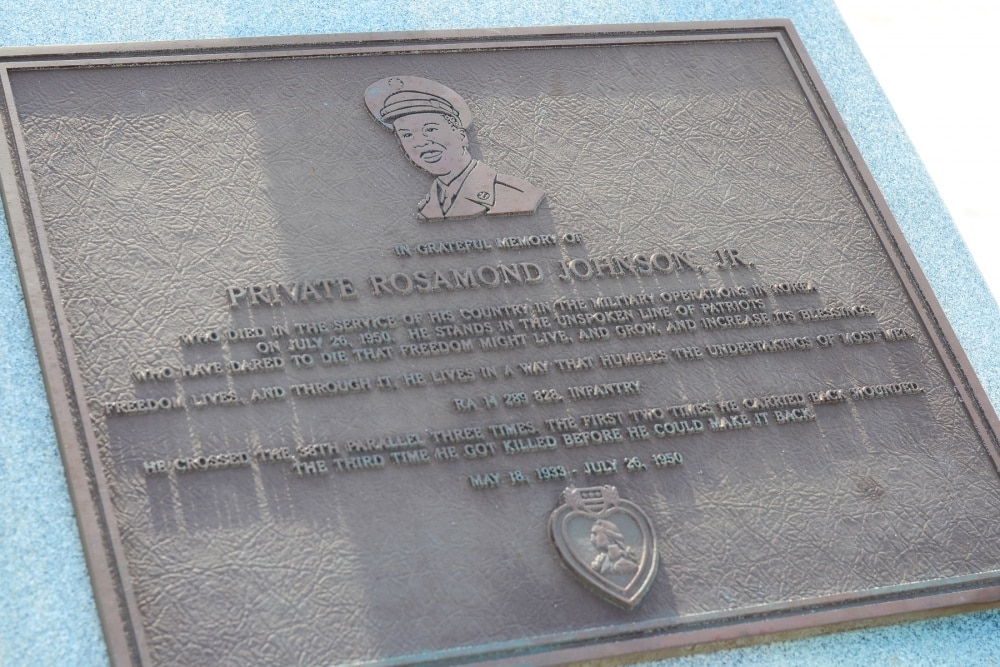 A monument featuring a plaque honoring Pvt. Rosamond Johnson Jr., is located near the Johnson Beach Pavilion. Following Johnson’s death the Sunset Riding Club Inc., proposed the beach be named after him and was subsequently named in his honor in 1950. (US Navy photo by Joshua Cox, NAS Pensacola Public Affairs Office/Released)

“The soldiers of the 24th Infantry regiment who fought in Korea were heirs to a long tradition of service by [African Americans] in America’s wars,” according to the book Black Soldier, White Army: The 24th Infantry Regiment in Korea, available to read online at history.army.mil. “Their forebears had fought alongside the colonial militias during the nation’s early years, at Lexington and Concord, and all through the American Revolution.”

Johnson died at the young age of 17 and was posthumously awarded the Purple Heart in 1950 for his heroic efforts. He was the first resident of Escambia County to die in the Korean War, and was laid to rest at Barrancas National Cemetery onboard Naval Air Station (NAS) Pensacola.

During the time when Johnson lived in Pensacola, segregation was prevalent in American society.

“Immediately after the Civil War ended, some states began imposing restrictions on the daily lives of African Americans, whether they were survivors of slavery or had always been free,” according to the Library of Congress.

“These laws affected nearly every aspect of public life for African Americans in Escambia County, Florida, including the world-renowned beaches,” according to the National Park Service. “While places like Pensacola Beach were designated “whites only,” the eastern end of Perdido Key became a refuge where [African American] citizens could enjoy the beauty and recreational opportunities of the beach and the Gulf.”

Following Johnson’s death the Sunset Riding Club Inc., proposed the beach be named after him and was subsequently named in his honor in 1950. In 1973, the beach was added to the Gulf Islands National Seashore. A monument in Johnson’s memory was erected in 1996 to honor the soldier for his courageous acts.