On July 13, these two worlds collided when a large endangered green sea turtle was found ensnared by fishing lines and nets in AUTEC’s harbor.

Mike Beres, a member of the AUTEC Fire and Emergency Services Water Rescue Team, spotted the entangled turtle and noticed that it was struggling to surface for air, bound by tight rope and nets, immobilized by the heavy ball of debris caught on its shell. 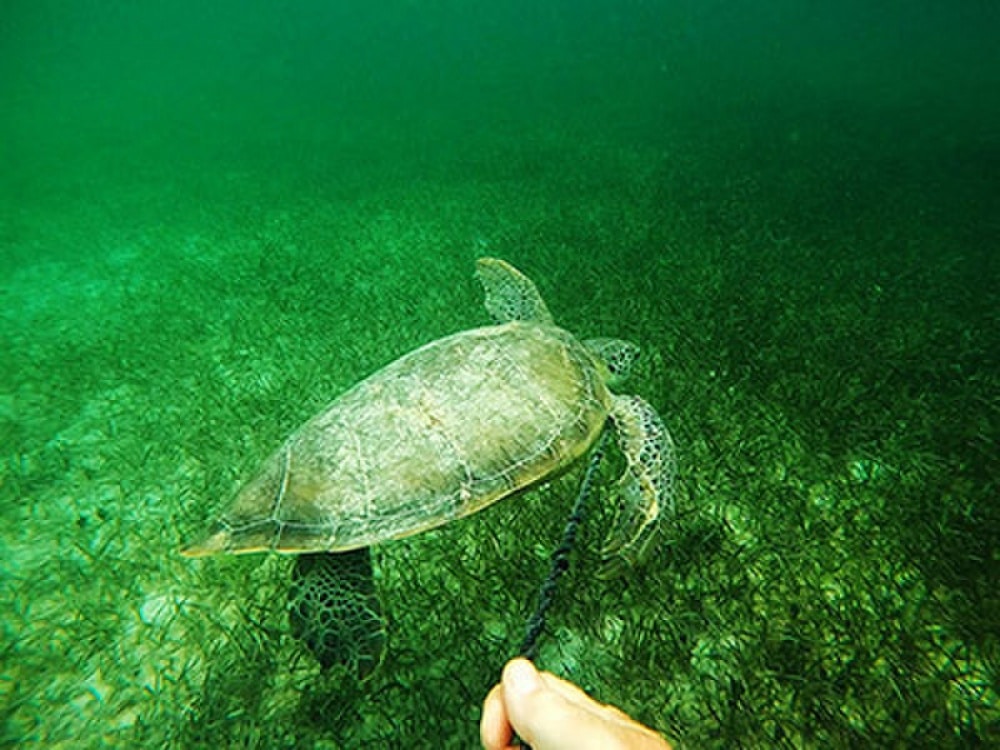 A fishing rope had wrapped tightly around an endangered green sea turtle’s right forward flipper when it was spotted in the harbor at Naval Undersea Warfare Center Division Newport’s Atlantic Underwater Test and Evaluation Center (AUTEC) on Andros Island in the Bahamas on July 13. Members of the AUTEC Fire and Emergency Services Water Rescue Team freed the turtle from the rope and other fishing debris. (Naval Undersea Warfare Center Division Newport/Released)

After quickly notifying the AUTEC team, Beres and fellow rescue swimmer, Greg Johnson, sprang into action to save the distressed turtle by safely cutting the debris off its shell. This was not an easy task as green sea turtle adults are known to measure 3 to 4 feet in width and weigh between 240 and 420 pounds.

The swift action of the members of the AUTEC Fire and Emergency Services Water Rescue Team saved the turtle’s life and served as yet another reminder of the many ways the U.S. Navy strives to protect the environment while operating on land and sea.

For more information on AUTEC and its mission, visit https://www.navsea.navy.mil/Home/Warfare-Centers/NUWC-Newport/What-We-Do/Detachments/AUTEC/

NUWC Newport is the oldest warfare center in the country, tracing its heritage to the Naval Torpedo Station established on Goat Island in Newport Harbor in 1869. Commanded by Capt. Chad Hennings, NUWC Newport maintains major detachments in West Palm Beach, Florida, and Andros Island in the Bahamas, as well as test facilities at Seneca Lake and Fisher’s Island, New York, Leesburg, Florida, and Dodge Pond, Connecticut.