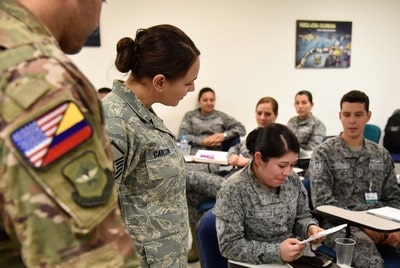 Organizations like the 571st MSAS have provided critical instruction that have allowed the Colombian air force to become more capable and self-sufficient.

Since 2012, air advisors have worked hand-in-hand with the Colombian air force, increasing their medical and airlift capabilities. This particular mission also included firefighting and combat search and rescue skills.

“This MTT is the epitome of what the MSAS stands for, and what they are capable of,” said Maj. Noelle Deruyter, 571st MSAS air advisor. “Our air advisors and the Colombian air force have worked hard together to build a solid foundation of interoperability between our countries.”

“With seven courses taking place at four separate locations, this MTT had such a broad scope, with many moving pieces,” said Tech. Sgt. Giancarlo Reyes, 571st MSAS air advisor. “It is a testament to how advanced and eager to learn the students here are. Every trip [to Colombia] we find that we learn as much from them as we hope they learn from us.”

“Medical planning and logistics is a critical step in any deployment,” Adams said. “This course has helped prepare the students for upcoming deployments to Africa where they will be using what they have learned firsthand. You can see how seriously they are taking this class, knowing that this information could help them save lives.”

Additionally, Colombian students were able to practice their language skills, giving their final presentation in both English and Spanish.

“These students already have a high level of fluency in English and their language skills will be imperative for their upcoming deployments,” Carlson said. “Their command felt it was an important part of the instruction that they be able to communicate and understand the medical terminology, not only in their native language but in English as well. It just shows you how highly capable our counterparts here are.”

“Pilots and fire department personnel don’t typically train together, so this exposure opened the dialogue towards creating joint doctrine to be used for future engagements,” explained Pantusa. “Through this training, personnel from both sections were able to better understand the part the other plays during MAFFS operations. This course, in particular, addressed a future capability that is in its infancy, and one that the U.S. Air Force will use to help the Colombian air force grow.”

Through the effective work put in by MSAS air advisors, the United States is strengthening relations and cooperation that will meet the challenges of crisis and contingency situations by providing the ability to respond together.

“Missions like this one in Colombia are a small example of the hard work that 571st air advisors are conducting to sustain U.S. and Colombia relations,” DeRuyter said. “More importantly, it builds confidence and capability for the Colombian air force which can now conduct certain operations without any U.S. assistance and gives them the ability to ‘pay it forward’ and instruct other nations in Latin America.”