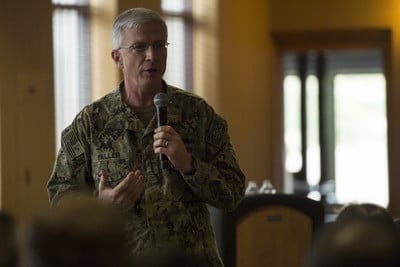 Faller recently took command of the U.S. Southern Command, which is responsible for all Department of Defense security cooperation in the 45 nations and territories of Central and South America and the Caribbean Sea. The visit was meant to integrate and familiarize him with 12th Air Force (Air Forces Southern), the air and space component to USSOUTHCOM.

“It’s real important for us, our command team to learn what you do and the details necessary for us to do our job,” Faller said. “I’m first and foremost here to learn today and the second is to get an appreciation for how we pull this team together. Unity of effort, one team is really important, our mission is so vital.”

Faller stressed the importance of every Airmen’s contribution to the success of the USSOUTHCOM and to U.S. national interests.

“It’s up to us to be the best security team we can be,” Faller said.  “We win as a joint team and we win with partners nations.”

Throughout the integration, Faller expressed to 12th AF (AFSOUTH) leaders and Airmen that partner nation relationships in the Caribbean, Central and South America are important and vital to accomplishing the mission.

“Remember that you’re on a winning team; remember that what we do, the difference we’re making is important to the security of this hemisphere of the world,” Faller said in his closing comments.  “I thank you for what you do, and building trust each and every day.”

Beneath the Skies: Aircraft Maintainers