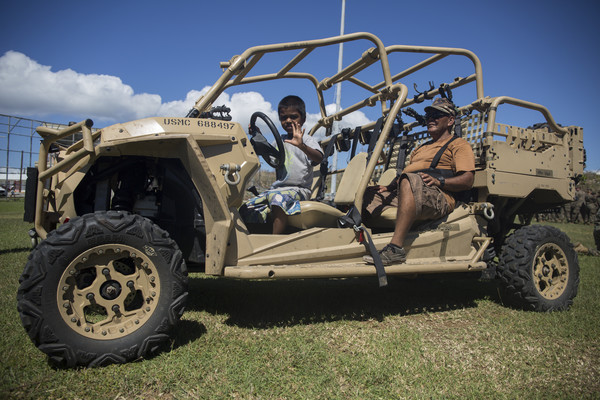 One look at Tinian told you all you needed to know – something very bad happened here. The trees shorn of all their leaves. Telephone poles everywhere like broken matchsticks. Trees, roots 12-feet wide, laying sideways, prostrate as if praying for mercy from Mother Nature. She tendered none, however, when the second largest storm to ever hit U.S. soil thundered across the Commonwealth of the Northern Mariana Islands like a steam roller late last month.

Super Typhoon Yutu. Historic, devastating, dangerous. Tinian in November 2018 must look much like it did in July and August 1944 when the Marines landed here while hopping across the Pacific. It seems fitting, then, during the 243rd anniversary of America’s Corps, that Marine boots once again tread across the island under a tropical sun. These Marines, however, carry axes instead of M1 Garands. CamelBaks instead of metal canteens. Boonie covers, not steel helmets. Humvees and 7-tons instead of Sherman tanks. Ka-Bars have been replaced by … actually, the Ka-Bars are still here.

Call in the Marines! It’s been said a thousand times if it’s been said once – Belleau Wood, Guadalcanal, Saipan, Korea, Khe Sanh, Desert Storm, Enduring Freedom, Iraqi Freedom. Countless Devil Dogs have solidified the Corps’ reputation as America’s 911-Break-Glass-in-Case-of-Emergency-Get-‘er-Done force since we first raised a toast inside Tun Tavern on Nov. 10, 1775. This year, for the Marines and Sailors of the 31st Marine Expeditionary Unit and Combat Logistics Battalion 31, it was a plastic water bottle filled with MRE Powdered Drink Mix on a far-flung island in the Marianas.

Marines know how to fight. The old bumper sticker is correct – Marines, when it absolutely has to be destroyed overnight. But the reverse is also true. After all, ‘No Better Friend’ comes before ‘No Worse Enemy’. Marines know how to build (and clear). And build and clear they did. In earnest. Take that, Mother Nature. Tinian and its people will recover, with the help of a Few Good Men (and Women). The 31st MEU Unit and CLB-31 aren’t forward-deployed in Okinawa, Japan for nothing, after all, as America’s premier Crisis-Response Force.

The Marines landed here Oct. 29 with a small advance team to assess urgent needs of local and CNMI officials and the U.S. Federal Emergency Management Agency. Water, route clearance, schools, the Tinian officials said. Yutu wiped out Tinian’s power grid, disabled municipal water, turned some roads into impassable labyrinths. So, the Marines went to work, leading a multi-service contingent to attack, not an enemy hurling grenades, but the wrath of Yutu and the tableau of devastation she left in her wake. Marines, Sailors, Airmen, chainsaws, Humvees, axes and water-purification systems, all running at a cyclic rate. Within 48-hours, these Marines and their partners, Seabees with Naval Mobile Construction Battalion 1 and the U.S. Air Force’s 36th Civil Engineering Squadron, had gained a foothold here, diesel fumes trailing crisscrossing military vehicles carrying gloved Marines, Sailors and Airmen to one of a dozen sites littered with broken buildings and tree branches snapped like twigs.

But the vanguard – Forward Command Element in military lingo – foretold of a greater wave of military might to add muscle to the DOD’s Defense Support of Civil Authorities’ mission here. The USS Ashland, one of the navy vessels belonging to the Wasp Expeditionary Strike Group, arrived Nov. 3 with some 180 additional Marines and Sailors to supercharge the relief efforts with their fleet of heavy vehicles and construction equipment, elbow grease and determination.

“Give me five good days,” said the 31st MEU and Task Force-West commander, U.S. Marine Col. Robert Brodie. Five days? Maybe with one arm tied behind our back, the Marines, Sailors and Airmen must have thought. They completed four 16-hour days – clearing roads and schools of debris; pumping, purifying and distributing 20,000 gallons of water to thirsty families; building more than 140 Federal Emergency Management Agency-provided tents – then dropped the mic as if asking, What’s next, Sir?

Well, the Marine Corps wouldn’t be the Marine Corps without a party to celebrate a job well done. And what Marine doesn’t shed a tear on Nov. 10, the birthday of their Beloved Corps? And what better place to raise a glass than at the forward edge of the nation’s defense, on a historic battle field with their Navy and Air Force partners?

So, celebrate they did, not as warriors toting guns, but as servants carrying axes and chainsaws with callused hands, sweaty brows and dirty fingernails. Hand-in-hand with their friends, the residents of Tinian, they paused Nov. 10, 2018 to honor the legacy of the Corps and Marines present and past, including the 326 Marines, Sailors and Soldiers lost securing this quaint island during WWII, establishing a vital airfield that eventually helped end that bloody war. “Anchors Aweigh” and the “Marines’ Hymn” rang beautifully across the Veteran’s memorial at sunset on the Corps’ 243rd anniversary, a fitting symphony to herald the longstanding Indo-Pacific-based Navy-Marine Corps Crisis Response Force team. The partnership continues, as it did during WWII, as the 31st MEU hands control of the DSCA mission here to the Seabees of NMCB-1 – after the battle, in August 1944, the Seabees built four of the busiest runways in the world at Tinian’s north end, directly across from another landmark, the island of Saipan.

And now, Nov. 14, with a handshake and friendly smiles, the Marines leave behind their mark, most visibly at the Veteran’s memorial park, where a Tinian artist painted the logos of both the 31st MEU and NMCB-1. Some of the Marine Corps spirit will undoubtedly remain as Tinians look back and recall the year Yutu tried, and failed, to dash the Hafa Adai spirit of these Northern Mariana Islanders, according to Brodie.

“This storm is historic – it had devastating effects on this island – but the people of Tinian are resilient and we’re glad to lend a hand to help them get back on their feet.”

Their mark will remain, also, in the coming years as Tinian’s children learn and grow under the shade of a thousand palm trees regrown since Oct. 25, 2018. Many of these children, it must be said, will end up wearing the same uniform as the Marines, Sailors and Airmen who helped restore a sense of normalcy here during the past few weeks – Tinian is, after all, American soil.

From a slow take off to high flying