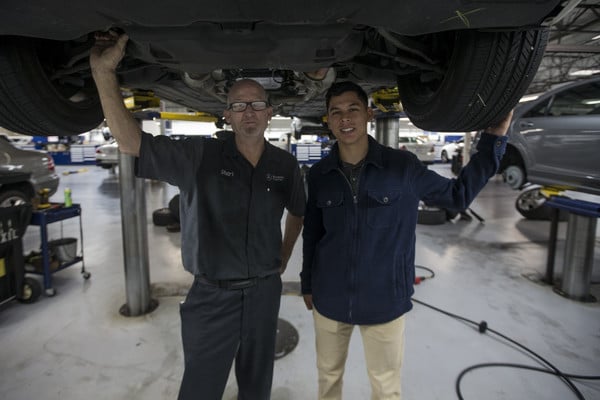 You can find Marines in any clime and place, but one place you don’t expect to find them is behind the scenes working at a Mercedes-Benz dealership.

Marines with Motor Transport Platoon, 5th Marine Regiment, 1st Marine Division, have been working as apprentices with service technicians from car dealerships in the Southern California region for more than twenty years.

The program began with commanders networking with several dealerships in the local area, said Capt. Alex Read, the logistics officer of 5th Marine Regiment. They were able to set up a partnership with Mercedes-Benz for the latest stage of this program.

The day-long apprenticeship is available to the most technically proficient noncommissioned officers in the regiment, who also display an interest in the program, said Sgt. Alex White, a quality control chief with 5th Marine Regiment. This program is geared toward different approaches to vehicle maintenance, expanding the fundamental training they were taught at motor transport school.

While observing other service technicians at Mercedes-Benz, the Marines were taught the similarities and differences between maintaining luxury vehicles versus a tactical fleet.

“Maintaining luxury vehicles as well as tactical vehicles are pretty much the same,” said Cpl. Jensen Runion, a quality control assistant with 5th Marine Regiment, who has attended the program before. “We work on are a bigger version of luxury vehicles and it was surprising how everything from the oil changing, to the tires, rotors, and engine all worked the same so it was easy for me to just dive in to work with them.”

The mission of this program is to get Marines working with vehicles they aren’t quite familiar with, and to strengthen their fundamental knowledge, said Read.

“We’re creating an environment where we can broaden the Marines’ horizons, and that’s initiative number one,” said Read. “Initiative number two is to entertain and implement creative ideas and solutions on a case by case basis to test them and see if they work. If they do work, then that should absolutely become a part of our standard operating procedures.

”There have also been significant improvements in the quality of work seen from the entire unit as a result of this training, said Master Sgt. Dale Tilley, the motor transport chief of 5th Marine Regiment. “The way [Marines] come back and help implement the functionality of the way another shop runs, that has taken our readiness to phenomenal heights,” said Tilley. “We’re able to better support other units because our readiness is at such a high level.”

Moving forward, the regiment has begun using new techniques they’ve picked up from this program, such as making laminated maintenance packets for each Marine daily that serve as a guideline during the work day, according to White. The packet links service requests to service hours required to complete each task, ensuring each vehicle gets the proper care it needs.

This program is not only great for Marines currently serving, but equally as important for those transitioning out of the Marine Corps looking to pursue a career in mechanics.

Kenneth Muna, a former member of 5th Marine Regiment, and currently a senior account executive with Before the Movie, Inc., volunteered to participate in the apprenticeship before leaving the Marine Corps.

“My experience with Mercedes-Benz allowed me to quickly gain skills that I could not find anywhere else, said Muna. “It helped me translate my military career into a civilian resume, it gave me direct customer service experience, managerial experience, and more leadership and interview experience.”

Since then, Muna left the Marine Corps, and worked his way to a managerial position in Mercedes-Benz, and is currently expanding to a career in the cinema advertising industry.

“I recommend that other units look for opportunities like this. The more knowledge you have, the better prepared you’ll be,” said White.

The amphibious tip of the spear