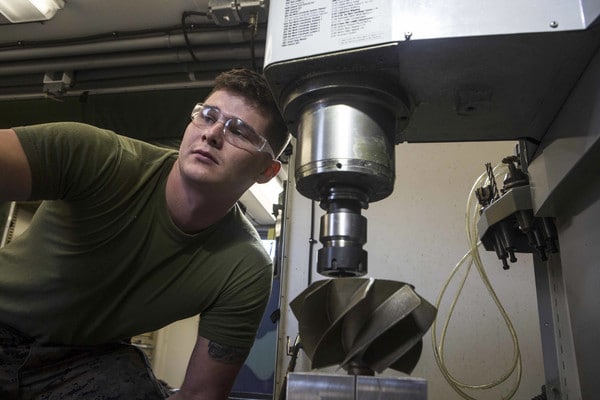 The Corps plans to use 3D-printed impellers when the original part wears or becomes inoperable and a new part cannot be received in a timely fashion.

“Call it a spare tire or a stop-gap solution,” said Joseph Burns, technical lead for MCSC’s Advanced Manufacturing Operations Cell. “This can get you through a mission, through your training exercise or whatever may be critical at the time.”

An impeller expels dust from the tank engine to keep the filters clean. When an impeller experiences wear and tear, the part may not pull enough air to function properly, which could degrade mission effectiveness.

A few years ago, the Marine Corps and the Army ordered a large batch of impellers. As a result, the Defense Logistics Agency—the agency responsible for providing parts for military vehicles—did not have enough parts to satisfy all orders.

“At certain times, logistical issues can occur,” said Tony Delgado, research and development program manager for additive manufacturing at DLA. “Sometimes the part is not available right away or something happens with a vendor and a part cannot be provided immediately. This was one of those times where the part wasn’t available.”

DLA can award a contract to a company, let that manufacturer set up a production line and then order a large sum of parts. However, it can take from six to 10 months for the Marines to receive a part. Waiting months for an order can reduce readiness or effectiveness on the battlefield.

Consequentially, MCSC had to find an alternative solution.

“Around that time, the Marine Corps had been provided with 3D printing additive manufacturing tools,” said Burns. “And Marines were being encouraged to be innovative and develop prototype solutions to real-world problems. A young Marine identified the impeller and began exploring ways to 3D print this part.”

Building on this early success, MCSC collaborated with Johns Hopkins University – Applied Physics Laboratory and DLA to formally qualify the performance of the 3D printed impeller and document the design in a technical data package.

The exercise conducted at Twentynine Palms in December and January was the culmination of formal qualification testing and was intended to confirm the performance of a 3D-printed version of an impeller in an operationally relevant environment.

After about 100 hours of testing on Abrams tanks during these exercises, Marines at Twentynine Palms disassembled the impellers to look for any unusual wear, leakage or other problems. None existed.

“Right now, we don’t see any reason why the 3D-printed impeller is any less reliable than the OEM version,” said Burns. “We plan to continue to collect operational hours on three 3D-printed impellers to better assess the long-term reliability of the part.”

MCSC is in the process of creating a 100-page technical data package for the 3D-printed impeller. The AMOC has reviewed two drafts of the TDP and plans to finalize the first version by the end of the second quarter of fiscal year 2019.

Once the TDP is finalized, the 3D-printed impeller will be fully qualified, tested and certified by the Marine Corps for use in the Abrams tank.

Although a more expensive alternative, a 3D-printed impeller can be produced and ready for use in less than a week, said Burns. Once the TDP is certified, a manufacturer, depot or Marine unit with the right equipment can 3D print an impeller for use. The expedited delivery can improve readiness on the battlefield.

“The 3D-printed impeller also gives the tank commander another option,” said Delgado. “It’s important to have an alternative option.”

Delgado emphasized the importance of all parties involved in the creation of the 3D-printed impeller.

“We’ve involved engineers from Marine Corps Systems Command and the Army, and we’ve even had lawyers in some meetings to ensure there’s no intellectual property infringement,” explained Delgado. “In terms of collaboration, this has been a great project.”

Leading from the kitchen