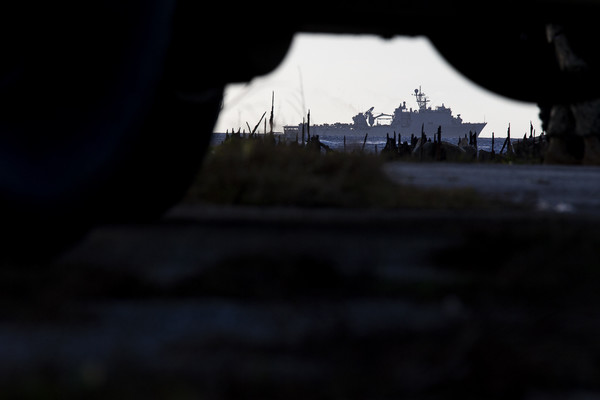 Marines with the 31st Marine Expeditionary Unit are in the lead for Task Group Tinian, consisting of several hundred service members belonging to each branch of the U.S. military. The joint force, led by U.S. Marine Col. Robert “Bams” Brodie, is executing crisis-response in support of the Federal Emergency Management Agency’s efforts to assist the U.S. citizens of Tinian, Commonwealth of the Northern Mariana Islands, recover from Super Typhoon Yutu, Nov. 3, 2018.

Military members from across the Indo-Pacific region, spearheaded by the 31st MEU and Combat Logistics Battalion 31, began arriving here en masse on Oct. 29, four days after the historic storm swept directly across the isolated island, to enable the Defense Support of Civil Authorities mission here. Led by FEMA officials and partnering with local government leaders and local law enforcement, the 31st MEU began categorizing urgent needs and establishing a base of support for partner and military units, including the U.S. Navy’s Naval Mobile Construction Battalion 1 and the U.S. Air Force’s 36th Civil Engineer Squadron, Andersen Air Force Base, Guam.

“We have effectively opened the door and laid the groundwork for long term forces of military members and federal aid workers to continue helping the Americans here on Tinian,” said Brodie, commander of the 31st MEU. “I am incredibly proud of the work these Marines, Sailors, airmen and soldiers have done in such a short time – it is incredible seeing the progress in only four days.”

Marines with the 31st MEU, U.S. Navy Seabees with NMCB-1 and 36th CES completed several imperative projects beginning Oct. 29, including purifying and distributing over 20,000 gallons of water; clearing two public schools, government buildings and the municipal power facility of downed trees and debris; and restoring emergency services’ capacity to respond to medical emergencies. All efforts lay the groundwork for the arrival of the dock landing ship USS Ashland, which arrived today with a well-equipped force of Marines belonging to CLB-31 and additional Seabees to augment existing capabilities already at work here.

“With the arrival of the Ashland and all its embarked Marines, Sailors, heavy equipment and supplies, we can continue building our support capacity for both FEMA and local leaders’ priorities, not the least of which is helping establish temporary shelters for displaced families who lost everything to Yutu,” said Brodie. “This storm is historic – it had devastating effects on this island –  but the people of Tinian are resilient and we’re glad to lend a hand to help them get back on their feet.”

During DSCA operations, the U.S. military provides essential, lifesaving and preserving support to American citizens affected by declared natural disasters. Led by FEMA, the U.S. Government’s domestic emergency response agency, the 31st MEU continues to partner with both local agencies and FEMA to address critical shortfalls of material and supplies to support the people of Tinian. The next steps include re-establishing semi-normalcy on Tinian, including set-up of temporary FEMA shelters for families with homes destroyed by Yutu.

“We are working with the Tinian Mayor’s office and FEMA to prioritize which families will receive temporary shelters because their homes were destroyed just more than a week ago,” said Brodie. “The 31st MEU’s Marines and Navy Seabees of NMCB-1 are the muscle for this important work, and we’re honored to work hand and hand with the resilient and courageous Americans on Tinian.”