26.2 miles of farmland and fighter jets 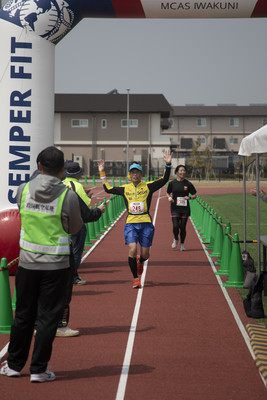 The runners weren’t exactly running to or from something but rather they were running for something: the 52nd Annual Marine Corps Air Station Iwakuni Marathon and Half Marathon.

The event is held by Marine Corps Community Services Iwakuni and supported in various ways by Iwakuni City and the air station. For the first time the marathon was held both on and off base and the route included parts of the flight line. The race offered a unique opportunity for Japanese residents who normally only see the flight line during the air station’s annual air show, Friendship Day, which is scheduled for May 5.

“We decided to change the route this year just to switch it up a little bit and make it more exciting for participants,” said Woneata Stallworth, the assistant athletic director at SemperFit for Marine Corps Community Services Iwakuni. “I think we’ve achieved that pretty well. Most people don’t get to go on the flight line at all and running off base was a nice touch to this race.”

One-hundred and seventy people from the air station and the local Japanese population volunteered for the event and guided the runners while providing water, electrolyte drinks and fruit.

One runner shared her personal story of camaraderie which was just an example of what could be seen throughout the course and at the finish line.

“A Japanese local realized I was just a few steps behind him, following in his wind,” said Sgt. Rachel Lucrezia, the training chief for Aircraft Rescue and Fire Fighting. “He turned around and told me to close the gap and he pushed me for the next three miles before he stopped to get some water.”