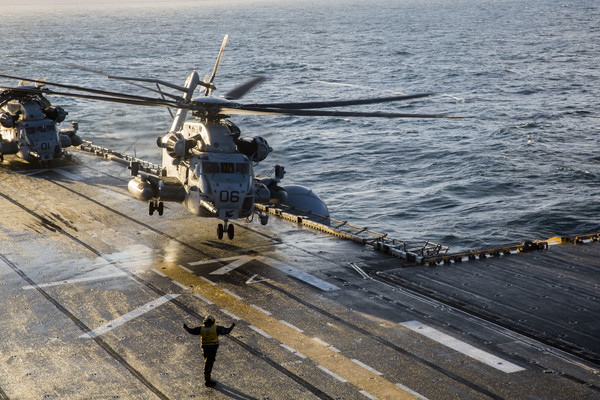 The 24th Marine Expeditionary Unit executed an air assault rehearsal aboard Keflavik Air Base, Iceland Oct. 17. The rehearsal was conducted in Iceland in order for the 24th MEU and Iwo Jima Amphibious Ready Group to rehearse ship to shore maneuver as an integrated Navy-Marine Corps team prior to executing an amphibious rehearsal in Norway for Exercise Trident Juncture 18.

Activities like the Iceland portion of Trident Juncture 2018 show the United States’ commitment and enduring relationship with its NATO Allies and partners.

Iceland, a NATO member, hosted the air assault which saw CH-53E Super Stallions and MV-22B Ospreys transport nearly 100 Marines from the USS Iwo Jima to a landing zone aboard Keflavik Air Base. The intent of the exercise was to increase the proficiency of the air assault force by securing a landing zone which sets the conditions for follow on aircraft.

“Conducting the air assault in Iceland provided the Marines and Sailors of the 24th MEU and Iwo Jima ARG with the opportunity to exercise our amphibious capabilities in a unique environment,” said Lt. Col. Misca Geter, the executive officer for the 24th MEU. “In order to increase proficiency, we need to exercise our capabilities in different locations so we can plan for different variables. The weather and terrain of Iceland forced us to plan around those factors.

The Marines with the assault force were from 2nd Battalion, 2nd Marine Regiment who are currently serving as the Battalion Landing Team for the 24th MEU. The Marines quickly set up security for the landing zone after they exited the aircraft, showcasing the speed and agility of Marines operating from the sea.

“During the air assault we landed on an airfield and immediately set up security which allowed for the aircraft to leave safely. We then conducted a movement to a compound where Marines set up security to allow U.S and Icelandic coordination,” said Cpl. Mitchell Edds, a squad leader with 2nd Battalion 2nd Marines. “Conducting the air assault allowed us to rehearse and better prepare for our assault in Norway. The training we conducted today allowed Marines to operate in an environment that we have not had much experience in as a company. It was an amazing to opportunity and experience.”

Iceland provides a distinctive cold weather environment which offers more valuable training and experience for the Marines as they were greeted by the frigid Iceland wind and temperatures in the landing zone.

“I think training in Iceland adds value as opposed to training in the U.S. because it’s a change in climate we don’t usually get to see. The climate Iceland offers allows us to test our gear in colder weather rather than just the heat.” Said Cpl. Riley Woods, an MV-22 crew chief with Marine Medium Tiltrotor Squadron 365, currently operating with the 24th MEU. “We are also able to fly with different gear, such as dry suits, which we don’t usually have the opportunity to train with. It’s an amazing experience working in other countries.”

With the air assault rehearsal complete, the Marines and Sailors are now focused on cold weather training before departing for Norway to complete Trident Juncture 2018.

“When it’s all said and done, the challenges that we faced with the Iceland portion of Trident Juncture will make us a more capable and lethal Marine Air Ground Task Force in the future. I’d like to thank the government of Iceland for allowing us to conduct this exercise in their beautiful country.”