Redeployed Airmen from the New York Air National Guard’s 107th Security Forces Squadron, part of the 107th Attack Wing, say they faced some unique challenges and endured trial and uncertainty throughout their mission to Qatar due to the COVID-19 outbreak. 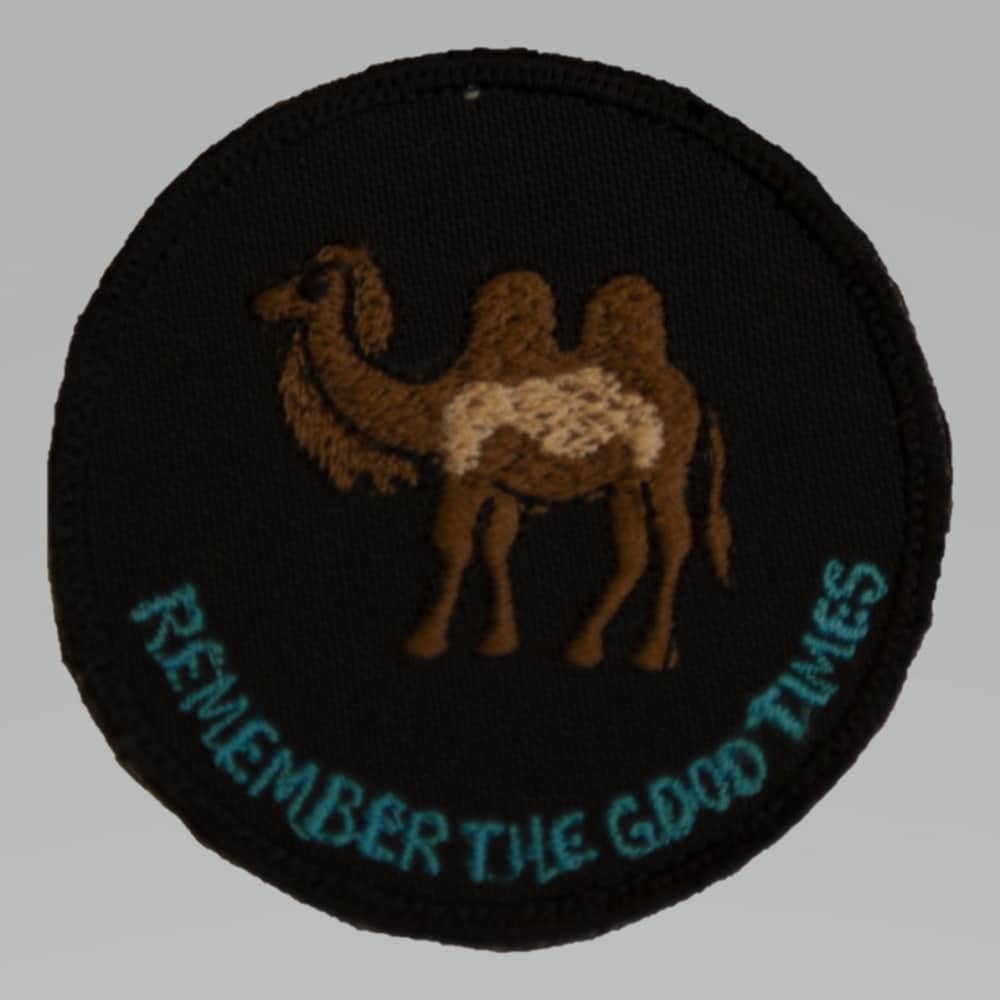 107th Security Forces designed a motivational patch reminding their team members to remember the good times. The team was made up of 9 Airmen, deployed to Al Udeid Air Base in Qatar. During the deployment they conducted base protection operations and also manned the entry gates, ensuring vehicle were safe and conducting searches. They redeployed to Niagara Falls Air Reserve Station, 24 June 2020. (Air National Guard photo by Lt Col Jess S. Traver)

Staff Sgt. Christopher Petty and Senior Airman Emily MacCallum, who redeployed at the end of June, say they focused on the opportunities and advantages of the deployment to make the best of a difficult situation.

The two said that a positive attitude made the deployment struggles easier and helped the entire team. The group faced multiple moves for housing, a constant change to security procedures and worst of all, an involuntary extension in theater for an additional three months due to the global pandemic.

The team was made up of nine Airmen, deployed to Al Udeid Air Base in Qatar. During the deployment the mission included base protection operations and also manning entry gates, ensuring vehicles entering the facility were safe after conducting searches.

Over the nine months deployed, the security forces Airmen conducted security missions as part of Air Force Central Command and the 379th Air Expeditionary Wing. They also participated in multiple training exercises and assisted partner nations in the region to build partner capabilities.

The team overlooked many of the challenges and stayed focused on the positive aspects of the mission, MacCallum said.

“We worked with military members from France, Italy, Canada, Jordan and Turkey, to name a few,” she said. “It was great to see how each military operated differently.”

“We worked daily with our Qatari counterparts, protecting the air base and personnel,” Petty said. “The gate was busy, but we had a great team and leadership.”

As March arrived, the Airmen began to train up their replacements and prepare for homecoming reunions. But just two weeks before redeploying home to New York they were told a pandemic stop movement meant staying in Qatar.

“At first we had to adapt to the changes and work with our replacement unit,” Petty said. “Since we were extended in country, the replacement unit led the missions. At first we operated a little different but over time we started to work together well as a team.”

Working with an entirely new unit had benefits for the team leaders, Petty said.

“As a new NCO, it was a great opportunity to work with experienced NCOs daily, to learn how to be a leader and what my Airmen expect from me,” he said. “It was a great advantage that will help me the rest of my career.”

The pandemic response also meant all sorts of new procedures to protect the health of everyone on base, Petty said.

“It was strange with the new rules and requirements to maintain social distancing,” he said. “It changed over time and the base was starting to open up before we left. I was very glad to see the gym open here on base.”

Petty is no stranger to military careers, with military service part of his father and mother’s families. His father was in the Army at Fort Drum and he decided to stay there.

Petty graduated from Watertown High School, joined the Air Force with his assignment at Francis E. Warren Air Force Base in Cheyenne, Wyoming before joining the New York Air National Guard and returning to Watertown.

During his deployment in Qatar, he said he met up with a former mentor and leader he had always looked up to back in Wyoming.

Chief Master Sgt. Shawn Drinkard is now the senior non-commissioned officer for Air Force Central Command and the two caught up in Qatar.

“One of my best memories was seeing Chief Drinkard, who I had served with and know from F.E. Warren Air Force Base,” Petty said. “It was great to talk with him and he gave me a coin.”

MacCallum was promoted to Senior Airman during the deployment and said she tried to take advantage of all the leadership opportunities on the mission, even with an extra 90 days of duty added on.

“I really enjoyed meeting new people and seeing a different culture,” she said. “We were able to go off base a couple of times and I enjoyed seeing the markets and stores. I also got to see how the active duty operates and the different types of missions and units out there.”

The team finally received notification that the stop movement was lifted and they would be return at the end of June, the two said. As the peak of COVID-19 passed New York State in May, the team was looking forward to a homecoming where their hometowns were already reopening, they said.

Departing June 23, they still had a 22 hour flight back home with multiple stops, arriving in Buffalo to be greeted by family and friends.

Taking changes in stride and focusing on the positives of the deployment were key to the successful deployment, the two agreed.

The Airmen now have 30 days of leave and return to duty with the 107th Attack Wing later this summer.

“With everything going on, one of our NCOs, Master Sgt. Ball had a saying to ‘remember the good times.’ We even had a patch made to remind us to look at the positives and the great team we have,” Petty said.