On a sunny day in June, Vanessa Robertson mounted her Can-Am Spyder ST limited and pulled into a TA truck stop on West South Boulevard in Montgomery flashing her colors: a starched long-sleeved yellow shirt and black leather vest adorned with silver butterfly clips at the front and a centerman patch on its back.

On the Southern Bypass, she waited for her soldiers to arrive. Not the members of a military unit, but a motorcycle club.

Robertson, who’s known as “Butterfly” to her fellow riders, doesn’t fit the typical image of a biker who lives in American popular culture. She’s a Black woman with raven colored sisterlocks that fall below her waist and a smooth, even-toned voice built on more than three decades of public-school service. 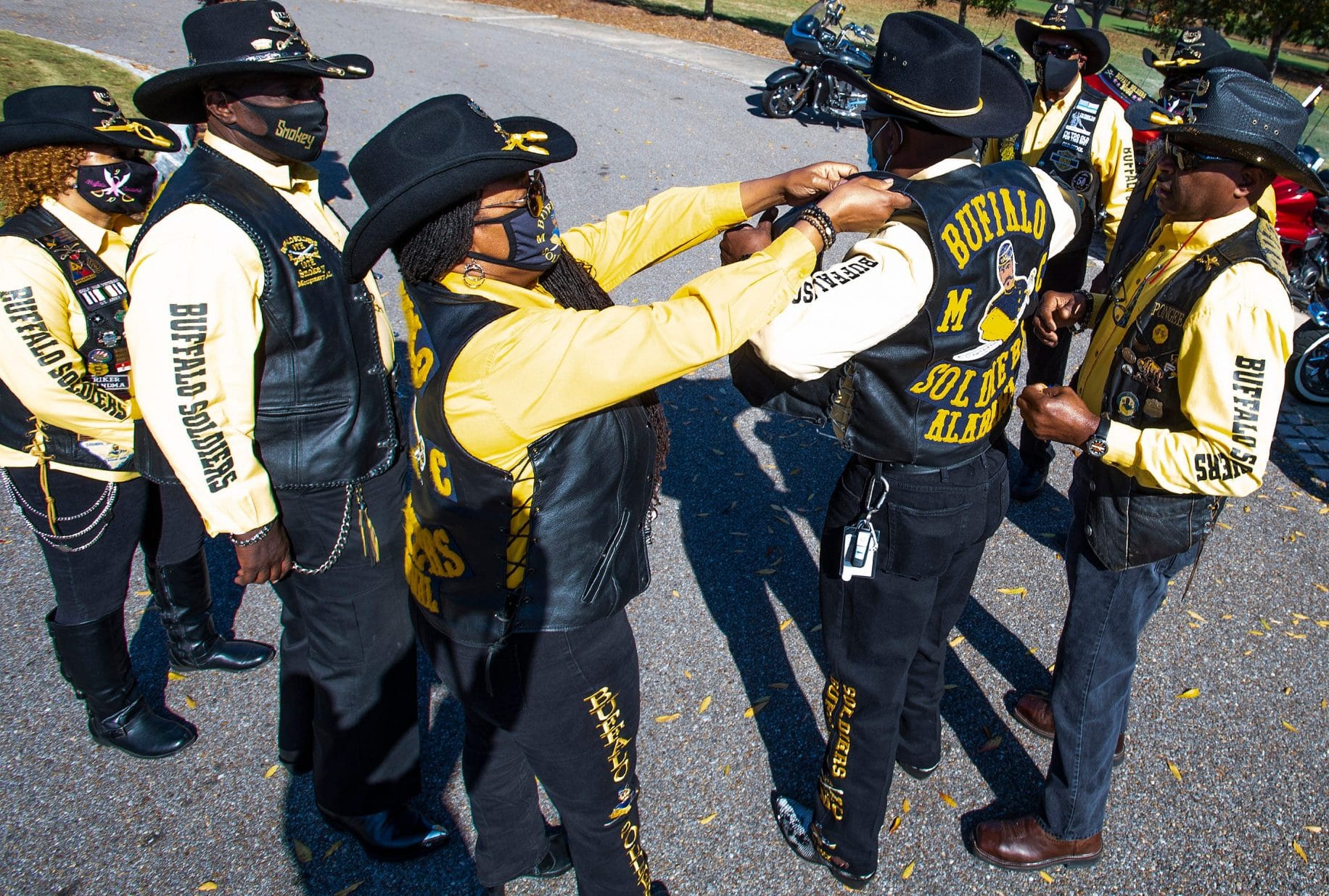 A retired teacher and principal, Robertson now serves as president of the Montgomery chapter of the National Association of Buffalo Soldiers and Troopers Motorcycle Club — the world’s largest Black motorcycle organization.

Founded in 1993 by retired Chicago police officer Kenneth Thomas, its mission was to establish a progressive motorcycle club that could promote a positive image in the Black community and bring greater prominence to the legacy of African American soldiers who served in the country’s all Black regiments following the Civil War in 1866 — specifically its 9th and 10th cavalry — until President Harry Truman issued the executive order to integrate the military in 1948 (9th and 10th cavalry units were deactivated in 1944).

These early Black soldiers, stationed west of the Mississippi, were among the first rangers in what would become the National Park Service. They built roads and trails, protected wildlife from poachers, and fought in wars to further westward expansion. Ironically, these Black regiments, made up of many formerly enslaved men, were tasked with protecting white settlers as they further encroached on Native American lands; underlining the complex and conditional nature of these soldiers’ military service, which many saw as a vehicle to gain equal rights. 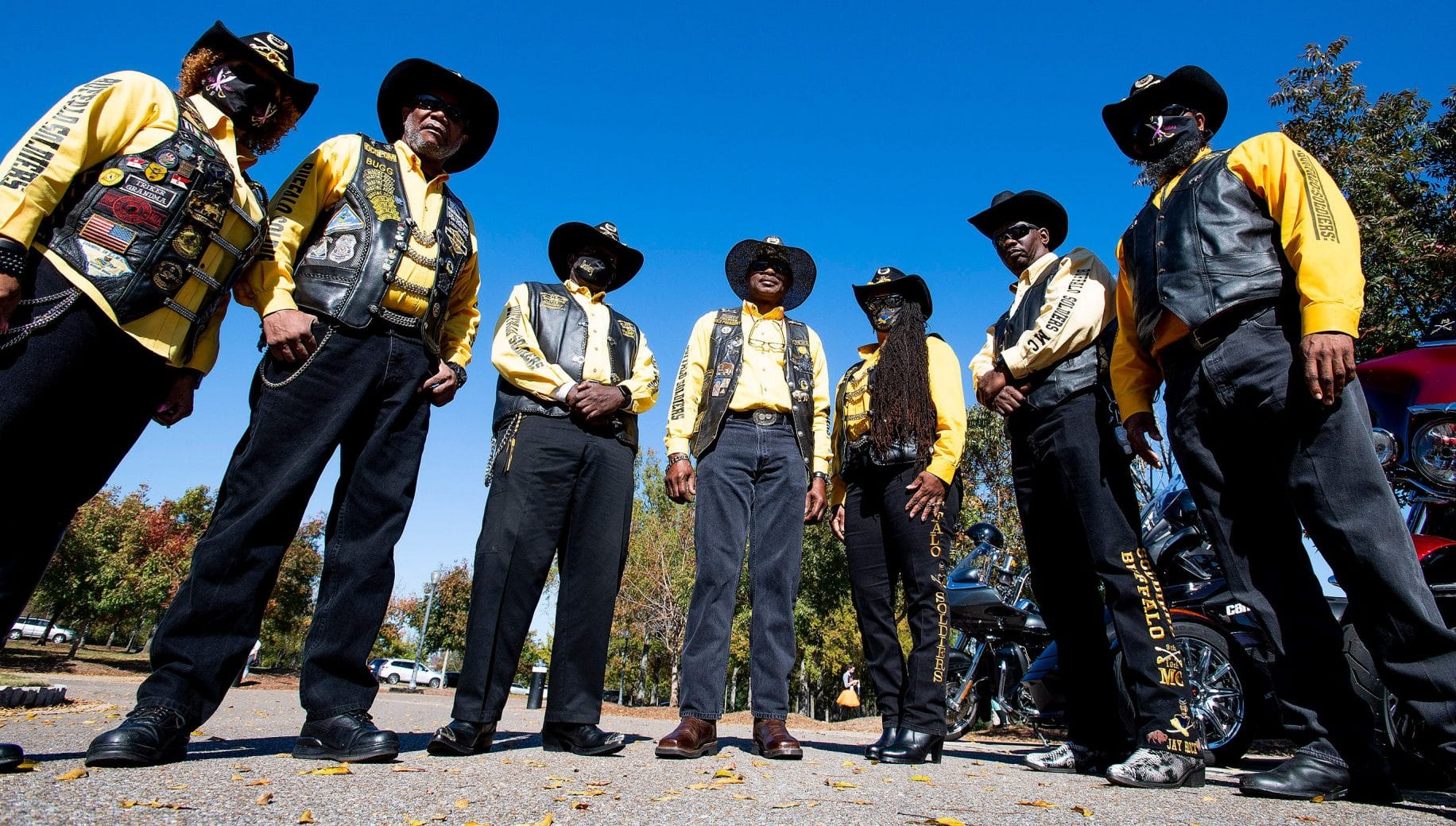 According to popular legend, Native Americans gave these soldiers their name either for the appearance of their hair and skin color, the heavy woolen coats they wore made from thick bison hide, or their “fierce” nature in battle. However, historians have never confirmed this. Whatever the reason, by World War I, Black soldiers in the 92nd Infantry Division had accepted the name and begun wearing a buffalo symbol as their unit patch.

Flash forward to 1999 and Thomas’s Chicago motorcycle club had amassed chapters in five different states. The clubs melded to form a nationwide organization composed of five “frontiers” — northeast, southeast, western, Great Lakes and central — and more than 120 chapters in locations as remote as Hawaii and as far as South Korea. In Alabama, chapters exist in Birmingham, Huntsville, Tuscaloosa and Mobile as well.

Not only does the club’s historical significance set it apart, so too does its work. The motorcycle club’s ethos is grounded in community service. Before probationary members can be elevated to “full patch” status, they must first complete a monthslong service project detailing how their efforts have had a positive impact on their community. That’s in addition to acquiring 2,500 miles of riding with the group, which varies from chapter to chapter.

This commitment to service, Robertson explains, is why a retired educator with little to no riding experience decided to join a group of bikers in 2013 (she first joined the Atlanta chapter where she lived at the time). It’s also the reason why soldiers were gathered at that Montgomery gas station on June 14. 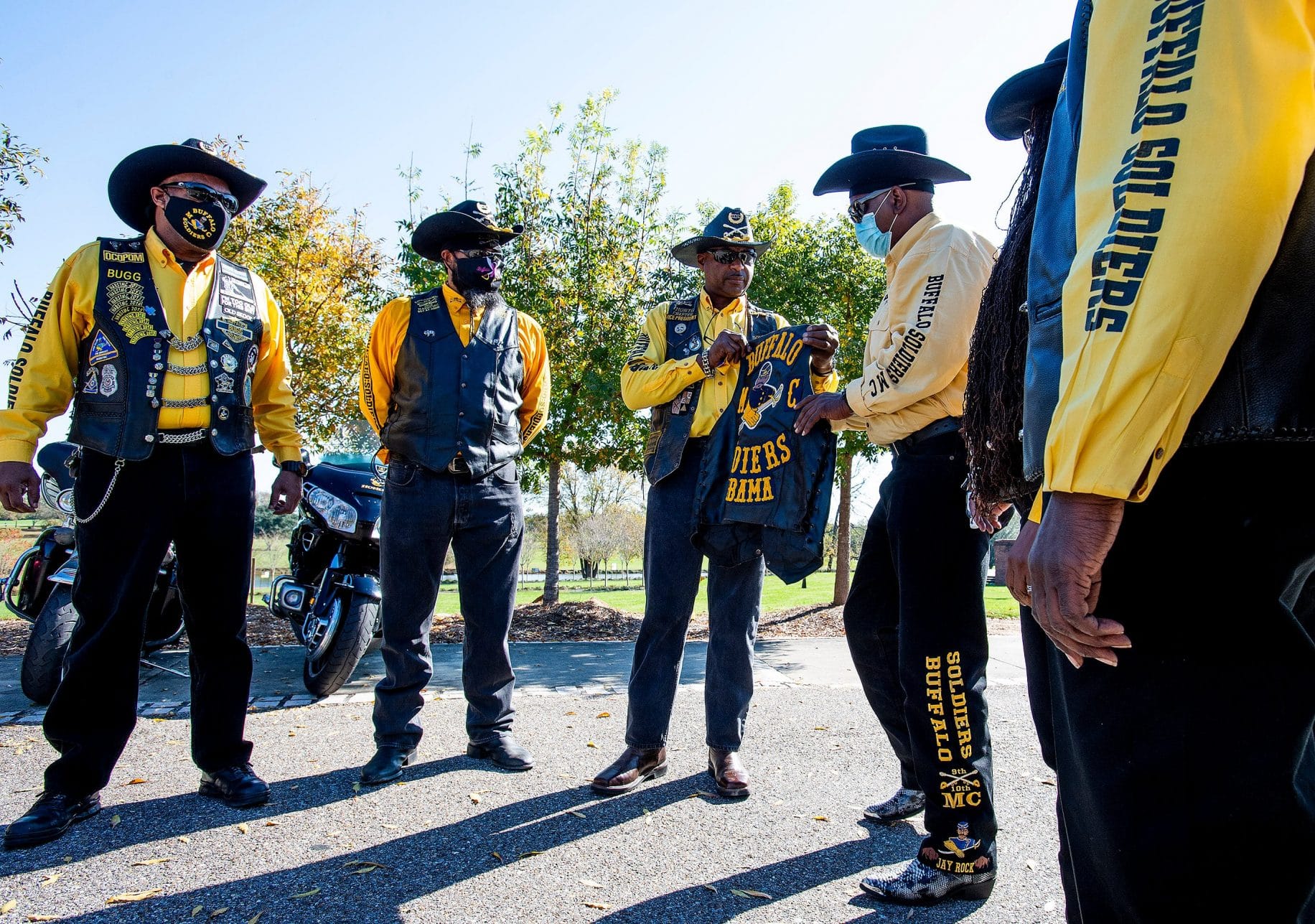 After protests erupted across the country in late May following the death of George Floyd at the hands of Milwaukee police, the club’s national president, Nathan Mack, knew something had to be done. Mack sent out word to local chapters and other motorcycle clubs calling for a solidarity “Ride for Justice.”

Although anyone is welcomed to join, the Buffalo Soldiers MC is largely made up of retired military members and former police. That’s not a group most would expect to stand in solidarity with protesters seeking, in some cases, an end to policing as we know it.

“That protest was all over the world. My son was in Okinawa like ‘Mom, what are y’all doing over there? They’re [in Japan] talking about Black Lives Matter.’ We needed to do something,” Robertson said.

She and the soldiers put the word out. About 500 bikers from across the state and some from neighboring chapters answered the call, Robertson said. 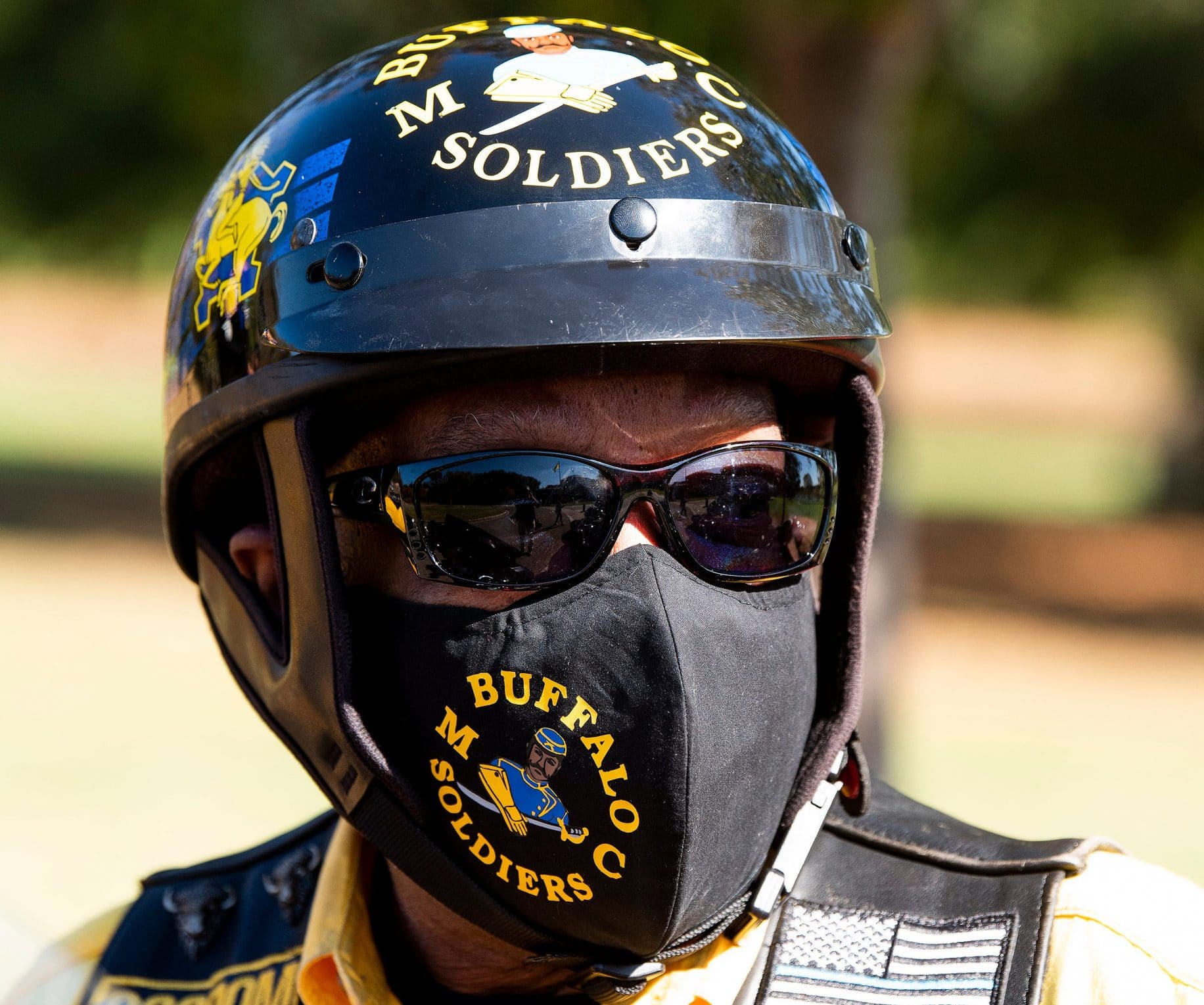 “There’s a storage place just when you come over the bridge,” headed toward the gas station. “That whole area was full of bikers. It was amazing.”

The group rode west from Montgomery and ended in Marion to honor Jimmy Lee Jackson; a civil rights activist killed by a white police officer in 1965 while taking part in a peaceful town protest. His death would help to catalyze the Selma to Montgomery marches that followed.

Selma Russell, a retired military police officer who’s known as “Smokey,” started the Montgomery chapter about 2005. When he came to a news interview, Russell cruised in on a 2015 Harley-Davidson CVO Road Glide with a Twin Cam 117 engine and custom alligator seats. He calls the bike his “second wife.” His first wife, Wanda Russell or, “Lady Smokey,” has been a club member for 15 years. She’s responsible for the group’s philanthropy and fundraising efforts.

Russell makes clear that the Buffalo Soldiers are not a one percent club, a term that refers to motorcycle groups that claim territory and essentially require any riders in their vicinity to “kiss the ring” or clear the road. These clubs can be aggressive and it’s often images of these groups the public conjures when picturing the leather-clad bikers who hit the open road.

“They live a different lifestyle than we live. When you think of one-percenter clubs you think back to Hells Angels. They claim territories, they’re normally into the fast life, drugs or women — as a property of [a man] as opposed to just being members,” Russell said.

The groups couldn’t be more different. In the months leading up to November’s presidential election, the Buffalo Soldier’s Montgomery chapter ran voting drives to register residents. Typically, they hold fundraisers and fish fry’s throughout the year to raise money for different causes: homeless veterans, college scholarships and back-to-school supplies they distribute to local families. A major component of their service is visiting schools to teach students about the legacy of the Buffalo soldiers; those efforts have been temporarily disrupted by COVID-19.

Despite the fact that Buffalo Soldiers have been memorialized in monuments and museums across the country, with late President George Bush in 1992 declaring July 28 “Buffalo Soldiers Day,” club members say they regularly encounter people of all ages who have never heard of them or know little about the first African Americans to serve in six peacetime regiments created by an 1866 congressional act. The regiments were later condensed into four units, two cavalry and two infantry.

“I don’t think we’ve worked hard enough to bring the Buffalo Soldiers to the forefront where it’s taught in our elementary schools and high schools. The [recognition] is always done on a local level and we haven’t been able to reach those national networks to be able to bring focus to it,” said Reggie Marable, NABSTMC’s national secretary.

Marable, who’s known as “Roadrunner,” is a member of the Buffalo Soldier’s Tuscaloosa chapter. The retired Army veteran has been riding since he was 5 and grew up watching his uncles and cousins build and fix motorbikes. He now teaches motorcycle safety instruction for the state and Harley-Davidson.

In a year he can easily rack up between 15,000 and 17,000 miles with the soldiers, notwithstanding the rides he does on his own. Marable has ridden from New York to Los Angeles a few times on his Honda Goldwing GL1800, the Cadillac of motorcycles he said. Marable insists it’s the most comfortable bike you can ride across the U.S.

“The experience of riding is something that puts you in a different world. When you’re in this world everything is always about Black-white, male-female. When you’re on your motorcycle and you’re out on that open road, bikers are bikers. That’s the thing that I love,” said Marable.