Throughout 2020, the United States Naval Academy has been celebrating its 175th anniversary as the institution opened its doors October 10, 1845.

Navy football will wear specialty uniforms for its annual showdown against archrival Army that continue that celebration.

This year’s uniforms, created by Under Armour, highlight the leadership, service and tradition the Naval Academy has showcased over the past 175 years.

Under Armour designer Adam Dougherty worked with Navy associate athletic director and equipment operations Greg Morgenthaler to develop the 2020 uniforms. This marks the 13th consecutive season the Midshipmen will wear special uniforms for what has been billed as “America’s Game.”

Army West Point released its specialty uniforms for the game on Monday.

It is a tradition that began in 2008 and Under Armour has partnered with the Naval Academy Athletic Association in the past to create uniforms that have paid homage to the Marine Corps, U.S. Navy fleet, Blue Angels flight squadron and Navy football’s two Heisman Trophy winners among other themes.

Coach Ken Niumatalolo credited Morgenthaler and athletic director Chet Gladchuk for working with Under Armour to produce uniforms for the Army-Navy game that excited the players and the fan base.

When the process has been completed, Niumatalolo is shown an artist’s rendering of the latest uniforms and told the theme behind it. 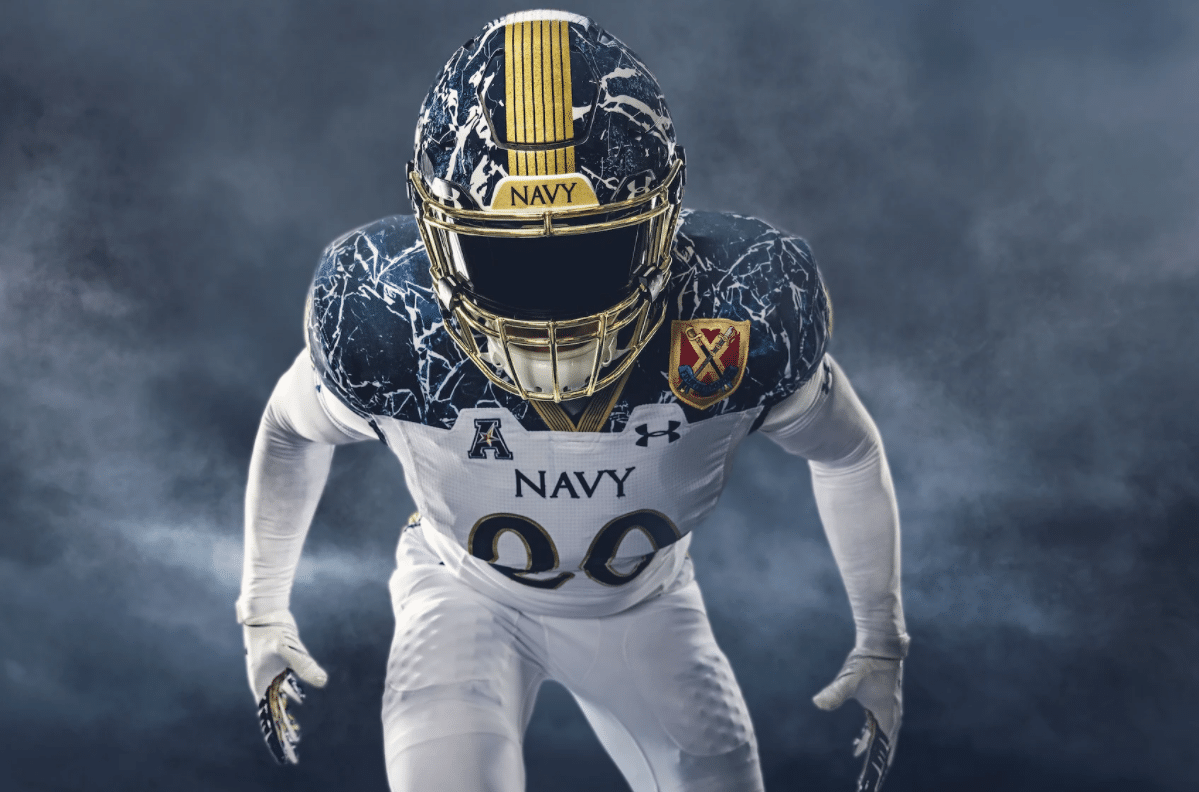 “That’s Chet Gladchuk and Greg Morgenthaler working with [the Under Armour] design team. They’ve done a really good job and the uniforms have looked really cool over the years,” Niumatalolo said Monday.

“Under Armour does a really good job with that, and I think our kids really looked forward to it. It’s also a big selling point in recruiting,” added Niumatalolo, noting the Navy uniforms for the Army game have routinely been voted among the nation’s best for a given season.

Morgenthaler is pleased with this year’s final product as he believes Under Armour found creative ways to celebrate the 175th anniversary of the Naval Academy.

“I think it’s one of the cleanest looks and definitely in the top three of any of the Army-Navy uniforms we’ve done,” Morgenthaler said. “I believe we told a great story with these uniforms.”

The Naval Academy is steeped in tradition and through its mission has produced a President of the United States, two Cabinet members, 16 Ambassadors, 24 Members of Congress, five State Governors, five Secretaries of the Navy, one Secretary of the Air Force, two Nobel Prize Winners, 73 Medal of Honor Recipients, 54 Astronauts and much more.

That proud tradition has also been displayed on the gridiron with the Navy football program that began in 1879. The Midshipmen have seen their program collect a national championship in 1926, produce a pair of Heisman Trophy winners in Joe Bellino (1960) and Roger Staubach (1963) and establish numerous NCAA records with its patented triple-option offense, which includes career and season marks from recent graduates Keenan Reynolds and Malcolm Perry.

Throughout the 175 years at the Naval Academy, Navy has played three games against Army on its home turf. It will happen for a fourth time this season when the 121st Army-Navy game is played at Michie Stadium on the campus of West Point.

The Midshipmen have won all three games played at West Point with the last coming in 1943 during World War II. 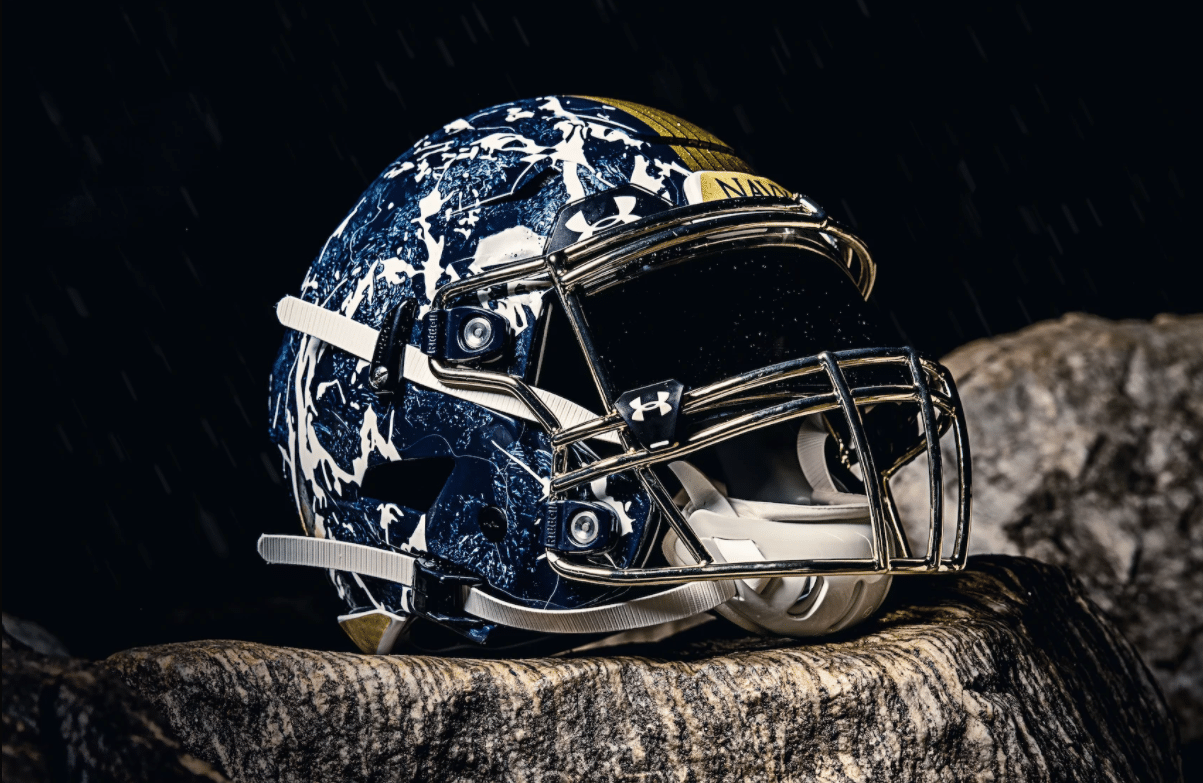 This year’s specialty uniform pays tribute to the Naval Academy by incorporating many of the special elements that can be found on the yard. Most notable is the blue and white marble pattern of the helmet and shoulders that aims to appear “cut from stone.”

This marble pattern, which has been named “Ocean Camo” is a prominent accent on the Naval Academy grounds and can be seen in the crypt of John Paul Jones and within Bancroft Hall.

Jones — who has been laid to rest in the Naval Academy Chapel — is the Father of the American Navy. Bancroft Hall — the largest dormitory in the country — is named after George Bancroft who founded the Naval Academy during his time as Secretary of the Navy.

“I think we hit a home run with the marble design. I particularly feel the helmet came out phenomenal,” Morgenthaler said. “It is difficult to come up with themes and designs for a white away uniform. That ‘Ocean Camo’ design really adds something special to the white uniform.”

Another unique aspect of the uniforms are the six stripes that run down the middle of the helmet and alongside the pants leg. Those stripes honor the original six frigates of the Navy.

Meanwhile, the Naval Academy Seal, which was established on January 25, 1899, and designed by Park Benjamin (Class of 1867), takes center stage in gold on the shoulders and gloves of the uniform. 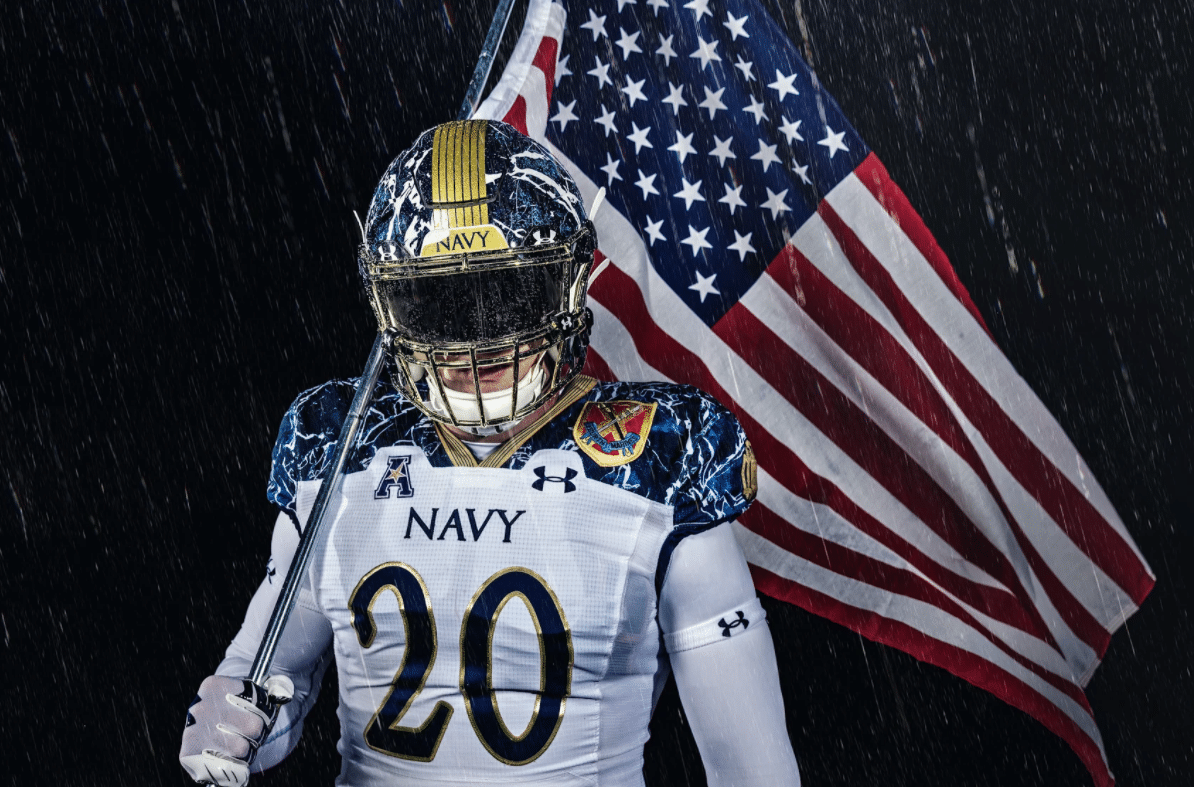 The seal is featured throughout the yard on buildings, flags and uniforms and represents the academy’s mission “to develop midshipmen morally, mentally and physically.”

That mission’s goal is to imbue midshipmen with the highest ideals of duty, honor and loyalty in order to graduate leaders who are dedicated to a career of naval service.