Army football will honor the 25th Infantry Division with the special uniforms it will wear for the rivalry game against Navy Dec. 12 at Michie Stadium in West Point.

This marks the 13th consecutive season the Black Knights and Midshipmen will wear special uniforms for what has been billed as “America’s Game,” which will once again be nationally televised on CBS.

This year’s Army uniforms were designed by Nike and have been nicknamed “Tropic Thunder.” 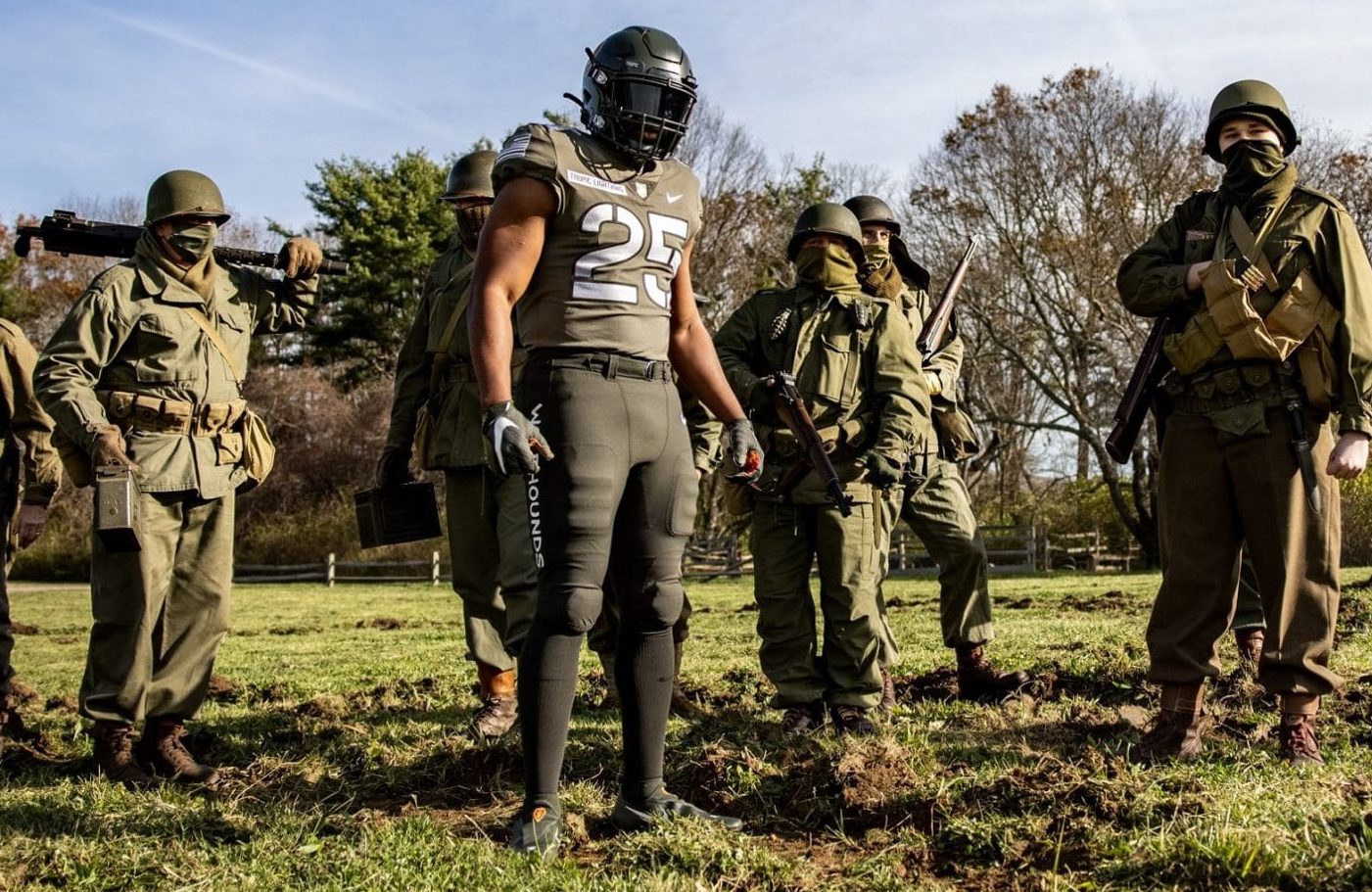 The 25th Infantry Division’s iconic shoulder insignia is a lightning bolt superimposed on a taro leaf. The colors of gold and red were those of the late Hawaiian monarchy. Soldiers over the years have jokingly referred to the patch as the “Electric Strawberry.”

Meanwhile, the 27th Infantry Regiment was the first American Regiment to completely defeat a full-scale North Korean attack. The 27th was nicknamed the “Wolfhounds” and is one of several sub-units of the 25th Infantry Division, and each will be honored with helmet stickers.

Whenever the 27th Wolfhounds delivered heavy fire, it was devastating. They were used during the Battle of Pusan Perimeter in the Korean War. 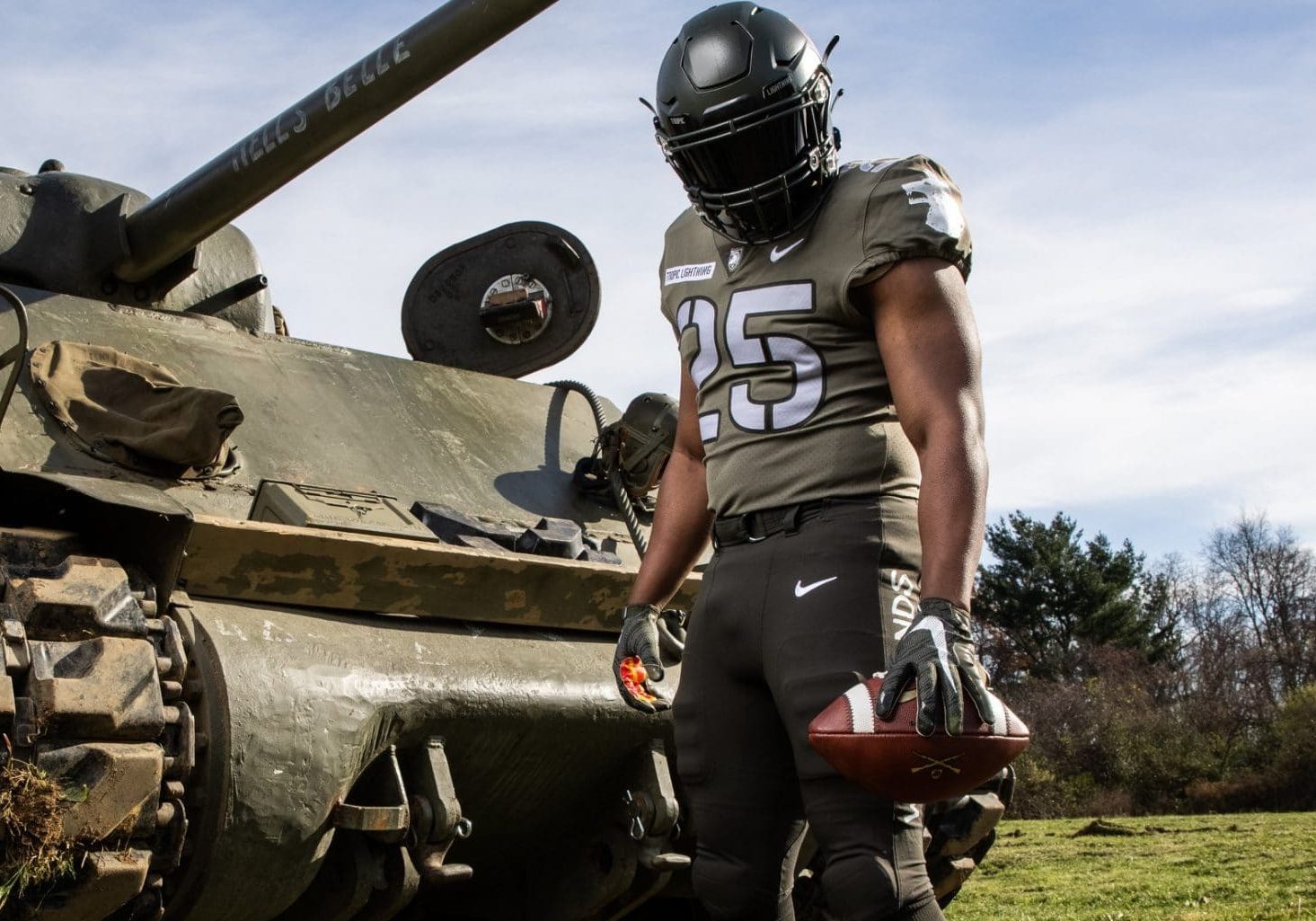 It was during this crucial defensive action that a Time Magazine photographer made famous the graffiti of Corporal Kenneth Taylor who painted the words “27th Inf, Courtesy of Fox Co.” on the broad side of a destroyed NKPA T-34 tank. So there would be no confusion, he also improvised a “Wolfhounds” along the barrel.

The Wolfhounds earned their nickname in Siberia in World War I aggressively pursuing Bolshevik Forces while guarding the Trans-Siberian Railroad. Kolachak and all his successors embody the regiment’s nickname and personify the tenacious ferocious fighting nature of the regiment. The regiment has a reputation of utter ferocity in combat and gentle compassion in peace.

These uniforms will include the acronym NEC (pronounced Neck), which is the Wolfhounds’ motto and has multiple meanings due to it being Latin and how it’s translated. However, it was a very strong meaning: No Fear on Earth; Frightened By No Difficulties; Difficulties be Damned.

Included on the uniforms is a bayonet insignia that is inspired by Lewis Millett, who received the Medal of Honor during the Korean War for leading the last major American Bayonet charge. He was part of the Wolfhounds.

With only bayonets and hand grenades, the company fought a hand-to-hand assault against heavy opposing fire. Millett and his soldiers used their bayonets with such lethality that the enemy fled in disbelief.

Lastly, the flag insignia on the uniforms is accurate for the Korean War era featuring 48 stars for the number of states during the time (Alaska and Hawaii weren’t officially added as states until 1959).