A man with a pistol in each hand — and a bag stuffed with weapons, gas, tools and a Bible — was fatally shot by cops after he fired bullets into the air outside Manhattan’s famed Cathedral of St. John the Divine at the end of a Christmas carol performance Sunday afternoon, officials and witnesses said.

The man reached the stairs of the Morningside Heights church on Amsterdam Avenue and W. 112th St. about 3:55 p.m., just after its choir finished singing Christmas carols, and started blasting a pair of pistols, police sources said.

He had a Dominican flag mask pulled over his face, and carried a bag on his shoulder. 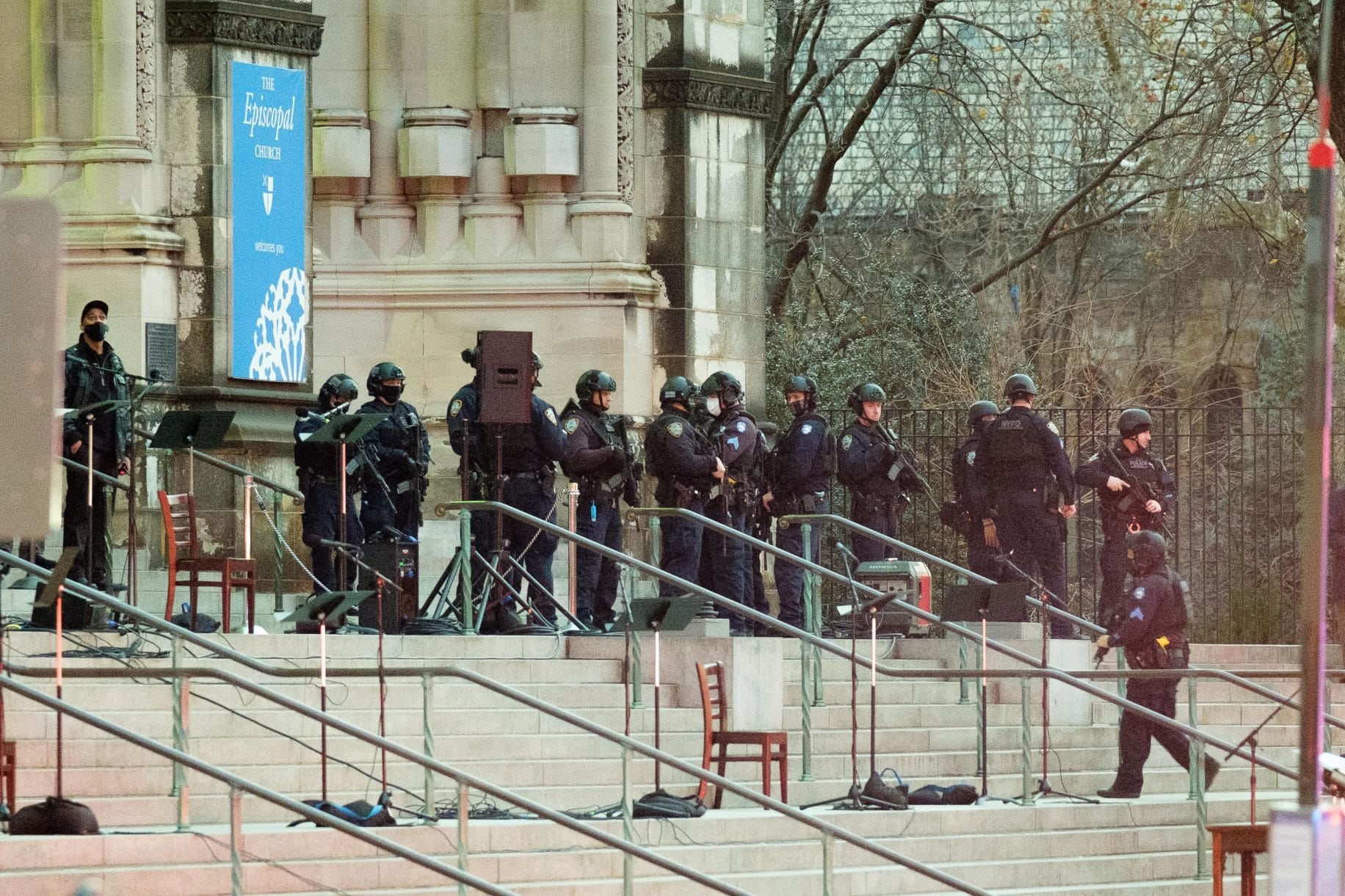 “Inside this bag was a full can of gasoline, rope, wire, multiple knives, a Bible and tape,” New York Police Department Commissioner Dermot Shea told reporters. “I think we can all surmise the ill intentions of the proceeds of this bag.”

An officer and a detective already at the church, as well as a sergeant at nearby Mount Sinai Hospital for an unrelated matter, drew their guns and returned fire, hitting the man in the head, Shea said.

Concertgoer Judy Romer, 60, said she heard a loud sound after the performance ended. At first, she thought it was part of a “grand finale,” but more noise followed and she realized she was hearing gunshots.

“And then someone yelled, ‘There’s a shooter up there!’ pointing above the crowd. Then I went crazy, it was pure panic because I realized my life was being threatened,” Romer said. “I thought all he has to do is tilt the gun downwards and we’d be going down like flies. 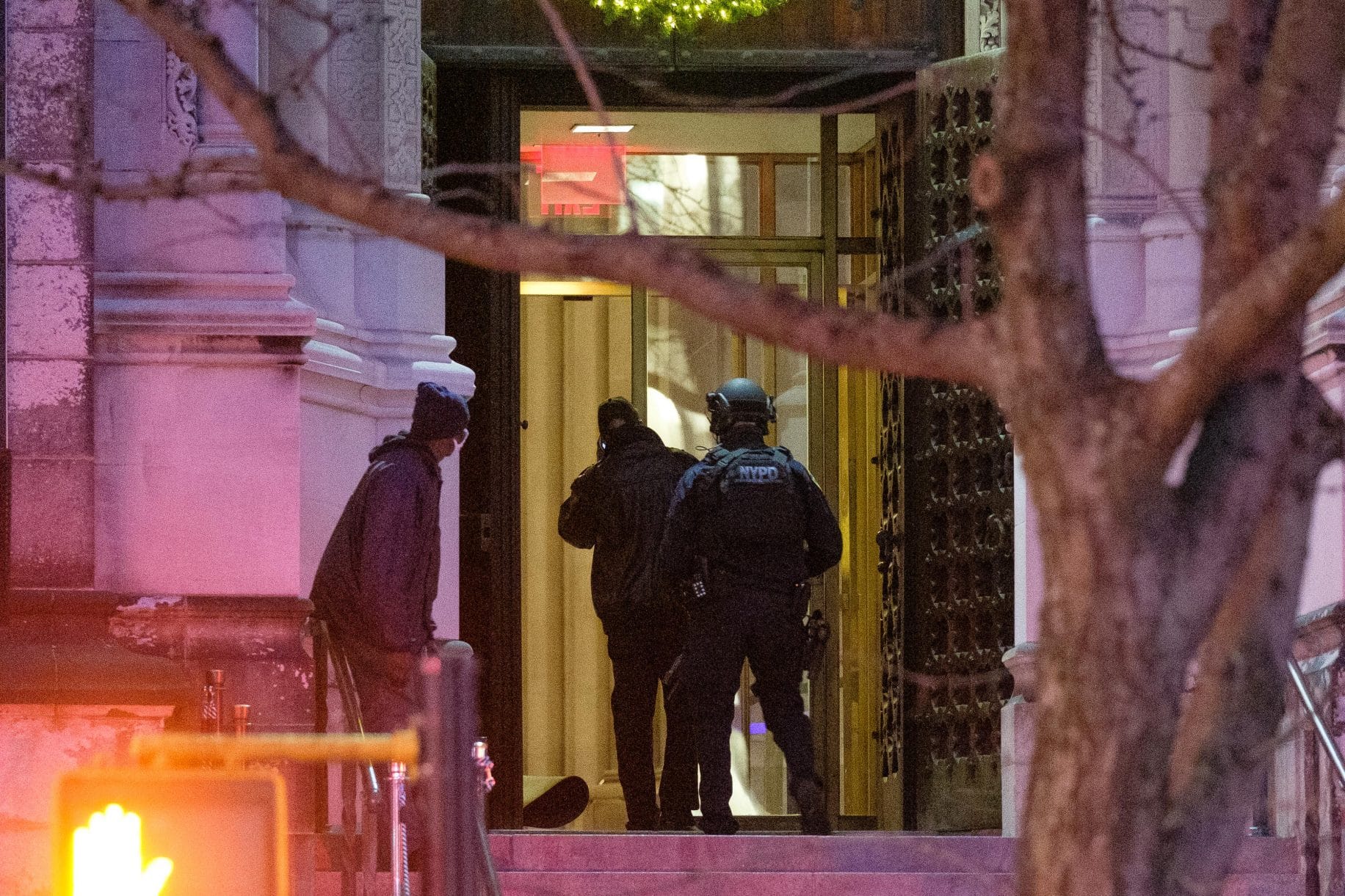 “He was tilting the gun up in the air and then bringing it down to shoot at the police officer, who was crouched down on the ground across the street.”

She described the officer as a “sharpshooter.”

The officer yelled, “Put down your weapon!” she recounted.

“And the maniac shooter had two guns, one in each hand, and was yelling, ‘Go ahead, shoot me! Alright, kill me now!’ ” she said.

In all, the three officers fired 15 shots. It’s not clear how many rounds the shooter let loose. 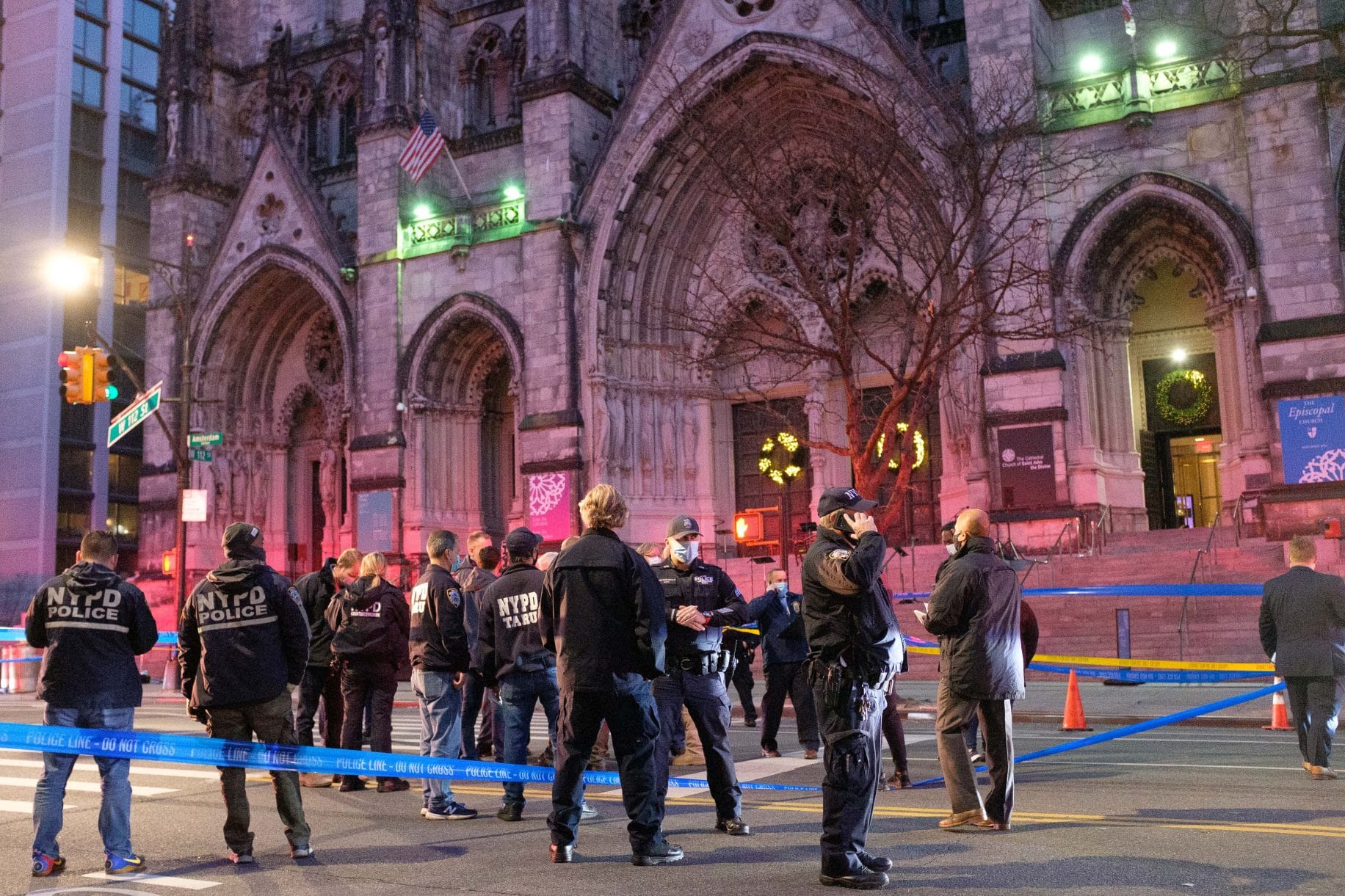 Police recovered both guns, and the bag, Shea said. The man’s name has not yet been released.

“We were hosting a holiday concert on the steps. It had just finished and a member of the crowd pulled out two pistols and began firing into the air. He cried out for the police to shoot him. Suicide by cop?” wrote the Rev. Patrick Malloy, a sub dean at the church.

“No one else was injured. Hundreds of NYPD descended,” Malloy wrote on Facebook. He declined further comment when contacted Sunday night.

Jessica Mates, Manhattan Borough President Gale Brewer’s chief of staff, was one of the hundreds gathered on the street for the concert. She and a friend were heading up the stairs when she heard the first shot, she said.

They ran into the cathedral for cover, and church staff closed the heavy oak doors behind them, giving shelter to about 30 or 40 people. 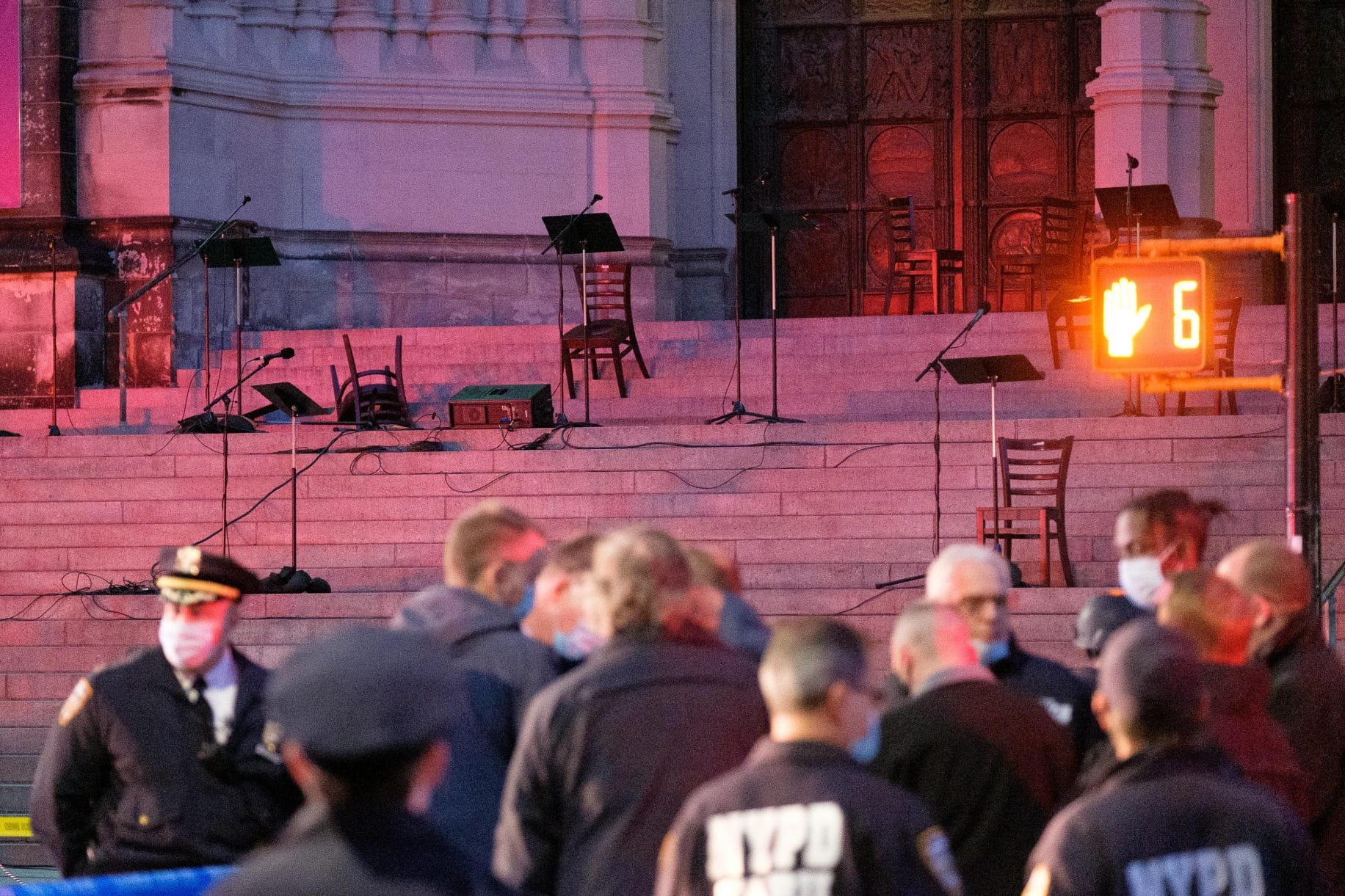 “At the point we were inside, we heard a whole bunch more gunshots,” said Mates, 58. “Once they closed the doors, the only thing you could hear were the shots … That was really the scary part because we didn’t know if he had shot other people.”

The cathedral staff told the terrified group to stay in the back of the cathedral, and after several minutes, they emerged, single file, hands over their heads, she said. They then walked into a police holding area, waiting for cops to ask them questions about what they had seen, Mates added.

“I’ve never been in a situation like this before,” Mates said.

“Obviously we’ve all read about it, seen it. It’s the scariest thing. Obviously we’re just praying to God that he’s not shooting randomly because there are a lot of people outside.” 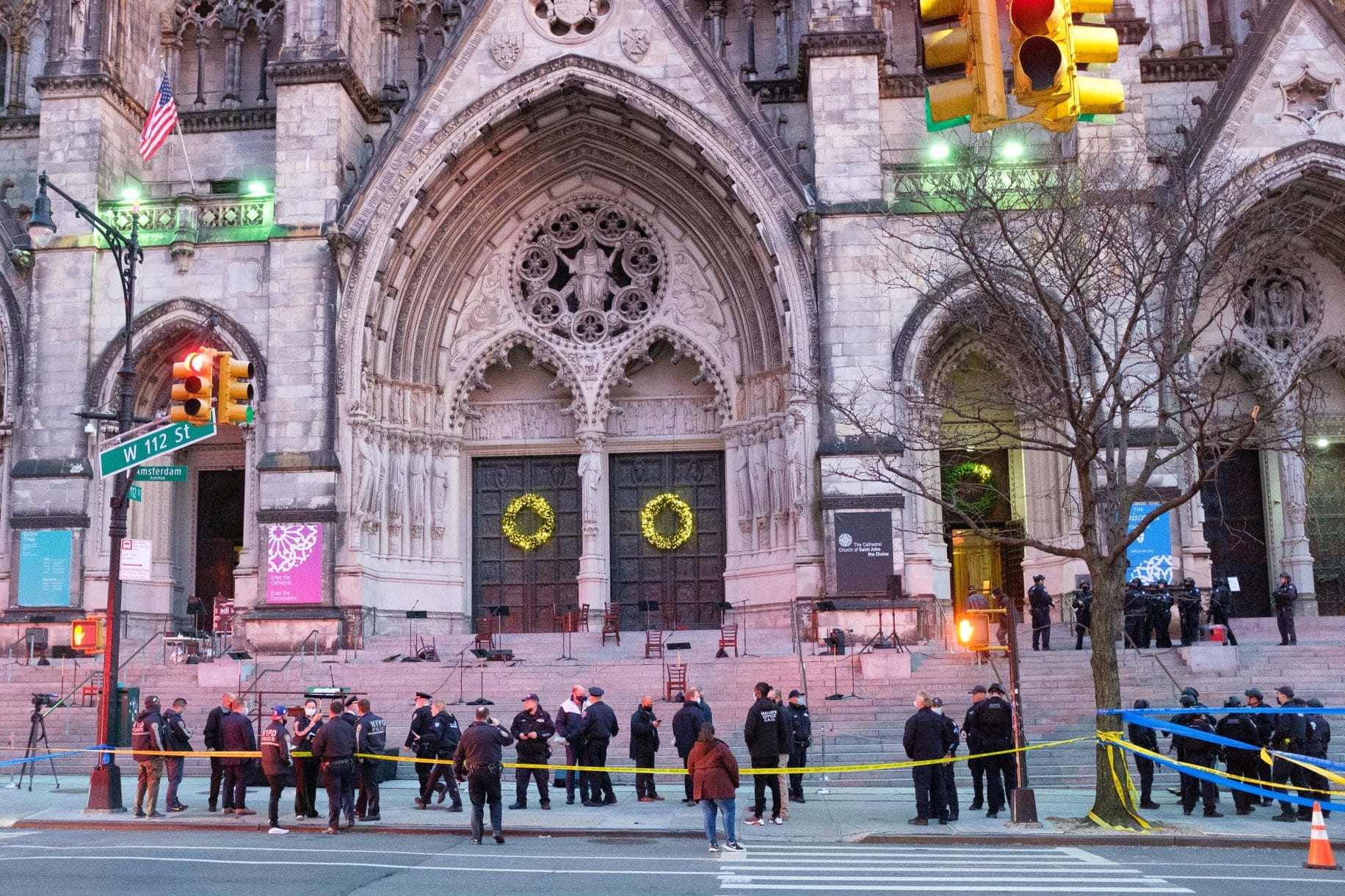 Medics took the man, believed to be in his early 50s, to nearby Mount Sinai Hospital, but he couldn’t be saved, sources said.

Though the cathedral is closed for indoor Mass, it hosted the Christmas carol performance on the front steps at 3 p.m.

“I was in my bed asleep, and the music, the beautiful music woke me up,” said Juanita, 65, who lives in a building across the street. “I went to the window to look and it was over, people were leaving … . All of a sudden I heard a gunshot.”

The concertgoers were leaving casually at first, but when the shots rang out, they started running, Juanita said.

“(The shooter) was all the way up by the door, on the last platform before you enter the door. He was firing the gun,” she said. “The guy shot maybe five shots. There were two police who were shooting back at him.” 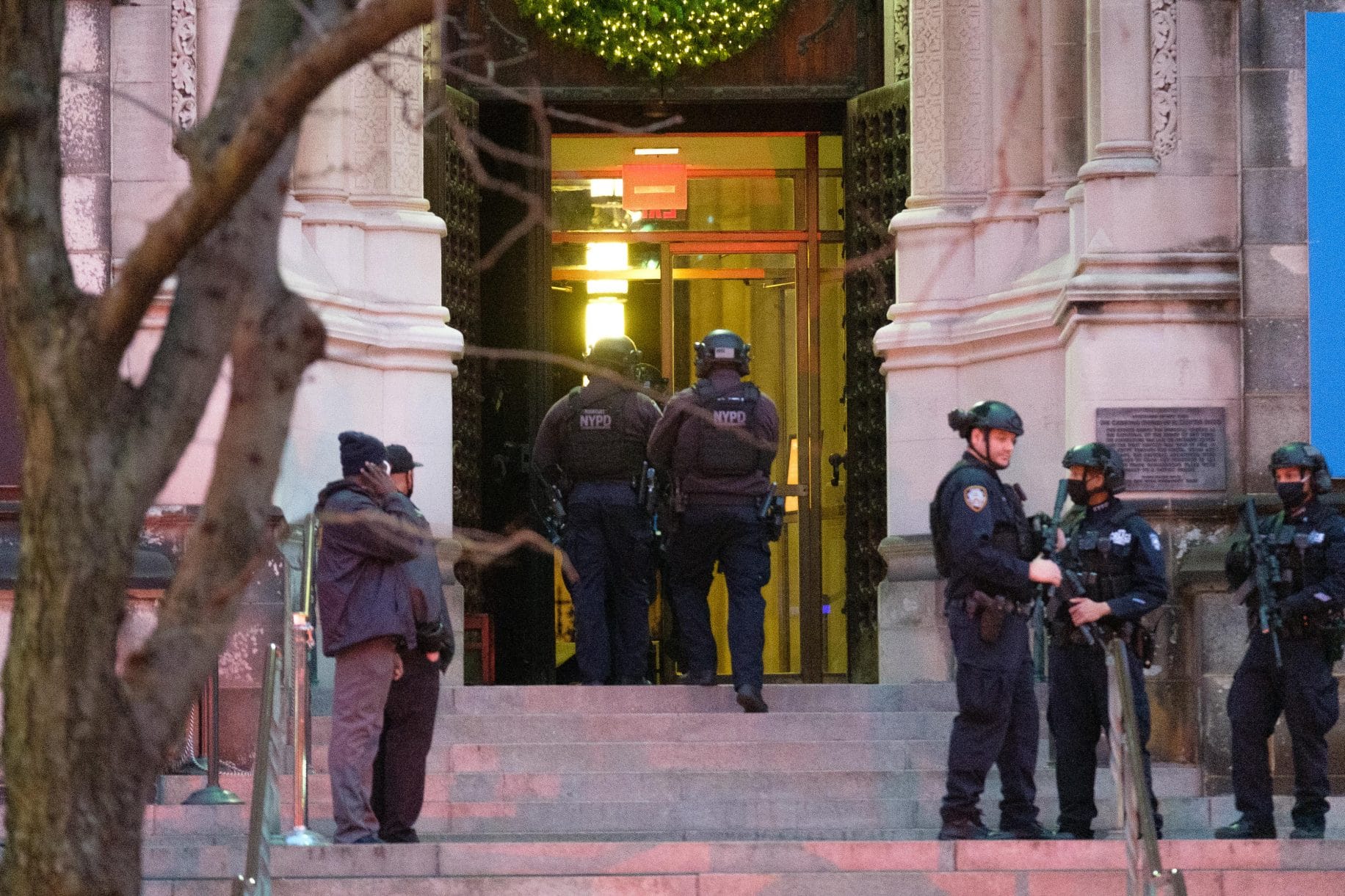 Aries Dela Cruz, Brewer’s press secretary and a member of the congregation, said he left the concert and was at a grocery store a block away when the shots rang out.

“There were hundreds of people there. We were all walking away,” he said.

“I feel fortunate for myself and my heart is turned toward everyone who got hurt,” he added.