VIDEO: Native American US Army soldier welcomes chances to tell others about her culture

Staff. Sgt. Lynette Eriacho, a Soldier of Navajo and Apache descent, with her daughter. (US Army/Released)
November 26, 2020 The US Army
Share
Tweet
Flip

Back then she was a youngster of 10 or so but she still remembers how on that sunny day in New Mexico, people at the Native American parade thrilled with pride as a float bearing World War II Navajo Code Talkers came into view.

Staff Sgt. Lynette Eriacho, now 33 and with almost nine years in the Army, sees that moment as one that started her thinking about maybe someday joining the military. It wasn’t the only thing that made her think of it. Economic stability was a big one too, among considerations. But to someone being reared in the Navajo culture, the role of the Code Talkers was a source of deep pride, she said, not only to the Navajo but to other Native American peoples.

Code Talkers were Native American service members who used their tribal languages to encode messages that left enemy codebreakers stumped. Many were Navajo but came from other tribes too. Code Talkers had first been used in World War I and their success led to much wider use in World War II. Some served in Europe but most served in the Pacific with the Marine Corps and Army. 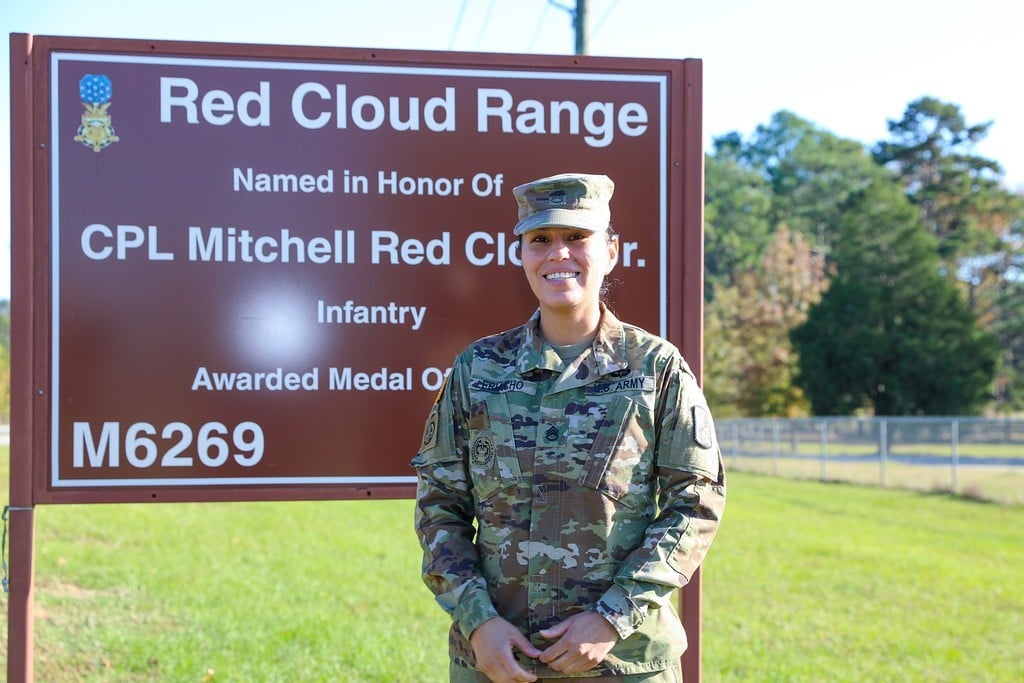 Staff. Sgt. Lynette Eriacho, a Soldier of Navajo and Apache descent (US Army/Released)

“That’s a huge draw for a lot of younger adults to enlist in the military,” Eriacho said of the Code Talkers.

Eriacho, who’s of both Navajo and Apache descent, enlisted in 2012, became a wheeled vehicle mechanic, and later trained to be a drill sergeant. She recently finished two years as a drill sergeant with Echo Company, 2nd Battalion, 58th Infantry Regiment, part of the 198th Infantry Brigade here. The brigade trains recruits attending Infantry One-Station Unit Training. She’s slated for a new assignment next month, also at Fort Benning, she said.

She was born in Gallup, New Mexico, about a two-hour drive west of Albuquerque, and grew up in Pinedale, about a 30 minute drive east of Gallup. In that region are the sprawling lands of the Navajo Nation. “It spreads out from Arizona, parts of New Mexico and Utah,” she said. There are also Zuni and Hopi reservations in the area.

After high school she lived for a time in Northern California, in places that were not predominantly Native American.

“It was very different for me to be a center of attention because where I grew up everyone’s Native American,” she said. “Everyone’s Navajo, or Zuni or Apache, and it’s like, where I started traveling more, that’s when people, non-Native American personnel, were more interested in me and my culture.”

In those places in California, El Cerrito or Richmond, people sometimes “assumed” she was Hispanic, she said.

“And I was like, ‘No I’m actually Native American.’ And then just seeing the excitement of others, who were like, ‘Wow! You’re Native American? You Native Americans are still alive?’ ‘What tribe are you from?’ And I would respond, ‘I’m from the Navajo Nation tribe.’ And do I have an Indian name? What am I doing so far away from home? ‘Do you know any of your tribe’s food?’ Like am I able to cook it or prepare any type of meal?

“And every time I go home I talk to my mom or dad they would tell me, ‘All right, well teach them about our tribe whenever you can. Let ’em know we’re here.'”

So when it comes up she tells others of some of the things Navajo culture holds important, which she said include: resilience, patience, hard work, respect for others, including elders, honoring earlier generations of Navajo who demonstrated courage, endurance and resilience in the face of hardships.

“Respect our elders – very definitely taught,” she said. “They went through, endured a lot. They grew up with very little. Our goal is to not send them to a nursing home. We want to take care of them. They took care of us, and our parents. Definitely, respect is a big one, that we’re very, very head-on about.

“Being very dedicated to learning” is also highly valued, she said.

But above all, said Eriacho, she tells people about a Navajo focus on “Walking in beauty,” which she sums up as living daily with an attitude of calmness, courtesy, and good will.

“We’re told to ‘Walk in beauty,'” she said. “That’s just like this quote, saying how we should go about our lives.”

Its “main premise,” she said, is that to the extent possible, people behave in a way that’s “balanced, disciplined and loving. Everyone we’ve encountered, every job we’ve done, that we’ve just left great things behind.”

Each November is National Native American Heritage Month, and Eriacho thinks the Army’s participation in it and similar observances can benefit all its members.

“I think it’s a good way to acknowledge and give recognition,” she said. “It gives a learning point for those who are working in the military. It does give some people time to pause and recognize their peers. It lets us reflect and be able to learn more and know that, wow, the Army’s made up of many unique cultures.”

A plan to save Parris Island? $475K project will prepare for environmental threats