Secretary Robert Wilkie traveled to the 44-acre campus to inspect the maintenance building where the tragedy occurred and meet the officials who are mourning the loss of the workers as they still search for the precise cause of the explosion.

“There are massive improvements coming to West Haven,” said Wilkie, who has served more than two years as the secretary under President Donald Trump. “It is something that I have been pushing in the time that I’ve been here for us to more efficiently and compassionately serve our veterans.” 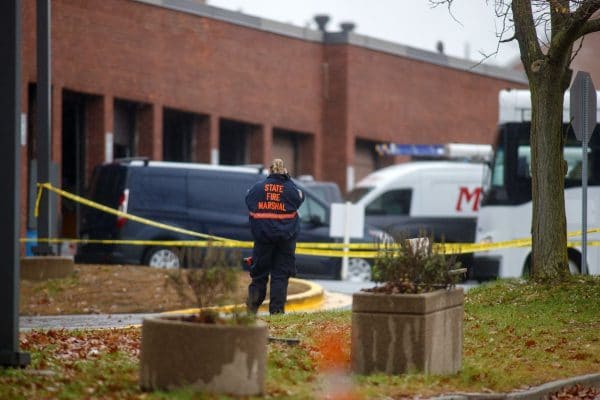 Even though the deaths involved a steam pipe explosion, Wilkie said that upgrades would likely still include that same type of infrastructure.

“Most of the federal government runs on steam,” he said. “That probably would not change, regardless of the upgrades to the building. As a former naval officer, if you go to the naval base in Norfolk, it’s all steam.”

Even before the explosion, Wilkie had been hoping to improve the sprawling complex, which has 39 buildings.

“I came here a few weeks ago just to point out how important this facility is,” he said.

“He was the example of what we all strive to be — and that is putting service before self,” Wilkie said, adding that Sims “embodied” the values and spirit of the VA to help others.

A U.S. Navy veteran, Sims served for more than 20 years with the Seabees, the Naval construction battalion whose mottos are “can do” and “we build and we fight,” Wilkie said.

Born in Illinois in 1960, Sims spent much of his later years in Connecticut, and he decided to work at the VA after retiring from the Navy. He is survived by his wife, two sons and four grandchildren.

The name of a private contractor who died in the explosion has not been released publicly.

The local VA administrator for Connecticut, Alfred Montoya Jr., is looking for a new, multistory, $375 million building near the hospital that would take two to three years to plan, build and open. The 161,000-square-foot surgical and clinical tower, which would be three to four stories high, would include a new operating room and surgical intensive care unit, among other additions.

“We’re working through the approval process and the design process,” Montoya said. “It’s not something that if it were approved today would be constructed tomorrow.”

A project of that size needs congressional approval, but Montoya said he expects it to happen.

U.S. Sens. Richard Blumenthal and Chris Murphy both said recently that they would fight for improvements at the VA complex.

As a member of the Senate Veterans Affairs committee, Blumenthal said that he would approach President-elect Joe Biden’s administration to seek federal funds for improvements in his long-running battle.

“I’ve been pressing administrations for the past eight to 10 years,” Blumenthal said. “The VA facility dates from the 1950s. It is an old, creaky, outdated facility. It has a new shell on the outside, but it has structural weaknesses.”

Montoya said he has been speaking daily with Blumenthal, as well as holding three calls Friday with U.S. Rep. Rosa DeLauro of New Haven. DeLauro could play a key role in future VA funding if she is elected as chairwoman of the House Appropriations Committee in a Democratic caucus vote by her colleagues in December.

Murphy, who serves on the Senate Appropriations Committee that allocates funding for veterans, agreed.

“The hospital has a very old mechanical system that requires pretty constant maintenance,” Murphy said. “This has been a lingering issue for a long time at the hospital — the fact that they have not been able to do a major upgrade to their mechanicals. The heating and air conditioning system in that building is far too old. While they’ve made a lot of upgrades, it’s part of the reason why the entire campus does need to be rebuilt.”

During his visit, the VA secretary, a Republican who is expected to depart from his job when Trump leaves office in January, voluntarily went out of his way to bring up Connecticut’s Democratic governor. Wilkie has been blasted recently by Democrats in Congress who charged that he had been campaigning on behalf of Trump and other Republicans, which has been denied by his office.

“In this very divisive time, I want to thank the governor of Connecticut — Governor Lamont,” Wilkie said. “We have an outstanding relationship. He has always been there for veterans and to speak with me about how the VA can help the citizens of Connecticut. I wish that kind of spirit would permeate the entire country. … I wanted to thank him publicly for everything that he’s done.”