PICS: WWII Navy man, 99, honored with parade and Veteran of the Year award

Robert (Bob) Johnson, 99, remembers seeing a crowd at the Kalamazoo Gazette building approximately eight decades ago, looking at a posting on a bulletin board that he said marked the start of World War II.

Soon, he was part of the war effort himself.

“I always liked the water, so I’m going to join the Navy,” said Johnson about choosing that military branch while some other friends joined the Army.

Johnson said he started his service career on a ship, where he was assigned for about two years. 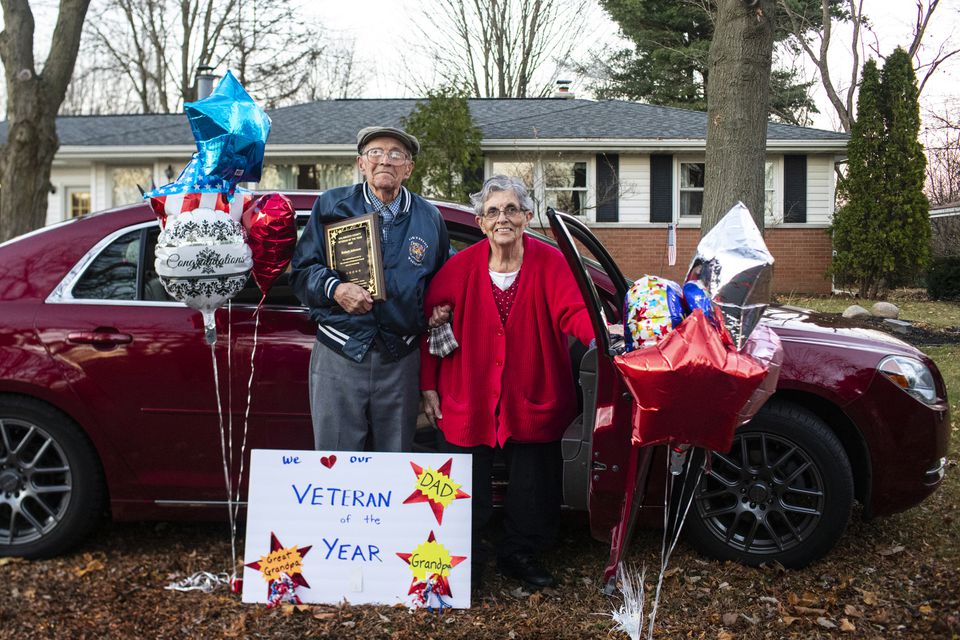 Johnson sat with his wife, Mary, in a car outside their home and they watched and waved as honking cars passed by, with passengers holding signs to congratulate the couple on their 70th wedding anniversary.

The family celebrated with a parade meant to allow for social distancing and held an outdoor gathering in front of the couple’s home on Andora Street in Kalamazoo. 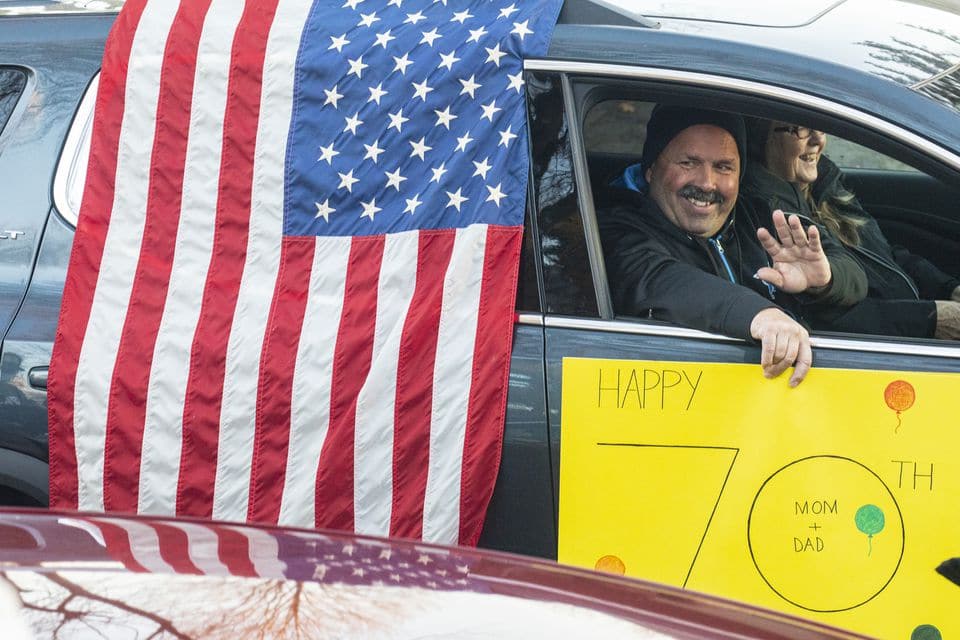 Family and friends presented gifts and balloons to Johnson as he grinned and shared stories with the parade attendees. Johnson has 13 children; 35 grandchildren; and 35 great-grandchildren — with another on the way.

“He’s a very proud Navy man,” said his daughter, Theresa Hojara, who nominated him for the award.

Johnson worked his way up to a Gunner’s Mate 1st Class on the USS PC-1198, he said. It was one of the smaller ships, equipped with depth charges and 40-millimeter guns, he said.

Returning to the U.S., Johnson remembers a celebration and hearing the president speak as the war was over.

Back at home, he got married and worked as a plumber, Hojara said. 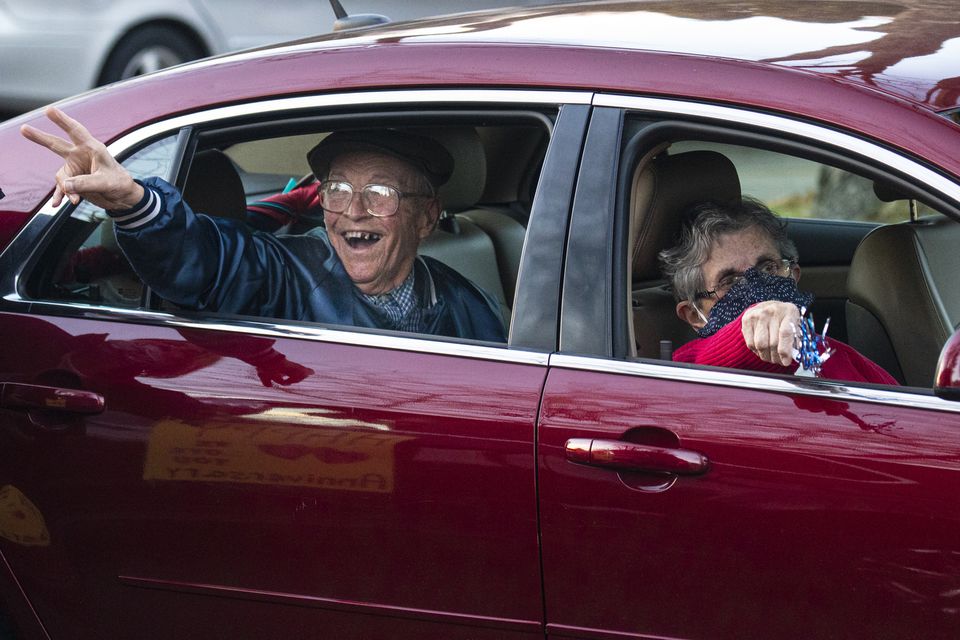 Johnson had volunteered at several different places until the COVID-19 pandemic restrictions shut much of the opportunities down. He was known around Bronson Hospital for distributing magazines to read.

“Everybody knows him as the magazine man there,” Hojara said.

Johnson said he misses being able to volunteer and see all of his friends at Bronson and elsewhere. Because of COVID-19 restrictions, most of those opportunities are currently shut down, he said.

Johnson is a selfless man, Hojara said. She said he has also volunteered at the Salvation Army and the Red Cross.

“Whether my dad was proudly serving his country in the Navy, raising his family or serving his church and community he always gave 150% and always added an extra dose of love,” Hojara said.

She said he stays busy at home whether he’s outside raking leaves or making her mom mad because he might go up on a ladder doing something. 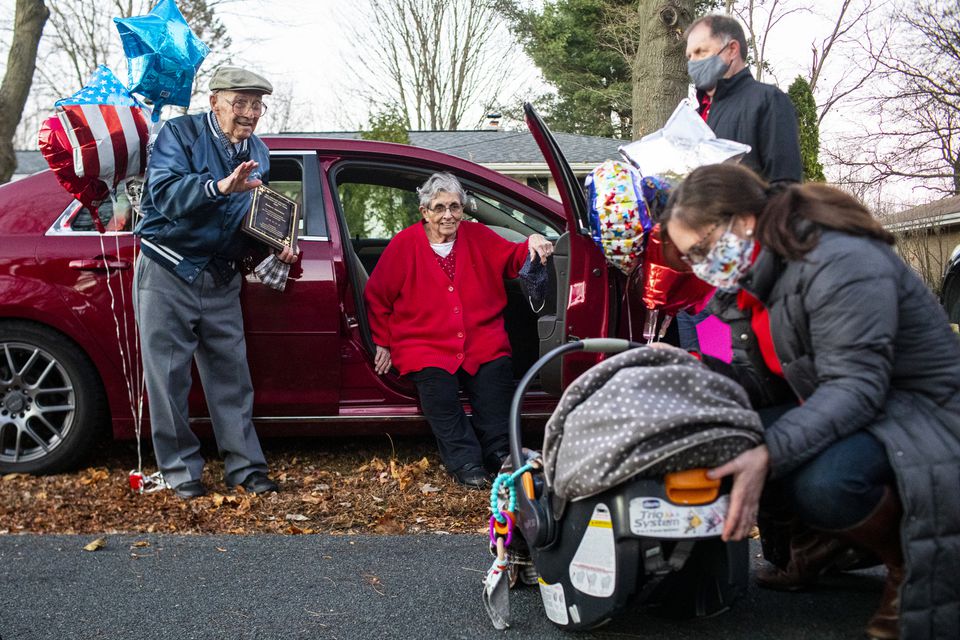 Johnson said he is counting down the months until his 100th birthday in August.