Pics/Video: Tyndall installing four-legged robots for security, a first for Department of Defense

Tyndall Air Force Base is living up to its motto as “Base of the Future,” with the integration of state-of-the-art, four-legged robots for security use — a first in the Department of Defense.

Ghost Robotics held a demonstration Tuesday morning next to Maxwell Flag Park to show a few dozen airmen and civilians how the robots work. The almost 100-pound robots, which look somewhat like dogs, can be controlled with a remote but will operate autonomously around the base as security.

The 325th Security Forces Squadron will be the first unit in the Department of Defense to use the technology for enhanced security patrolling. They will test the capabilities of the robots as the precursor for the Air Force as a whole. 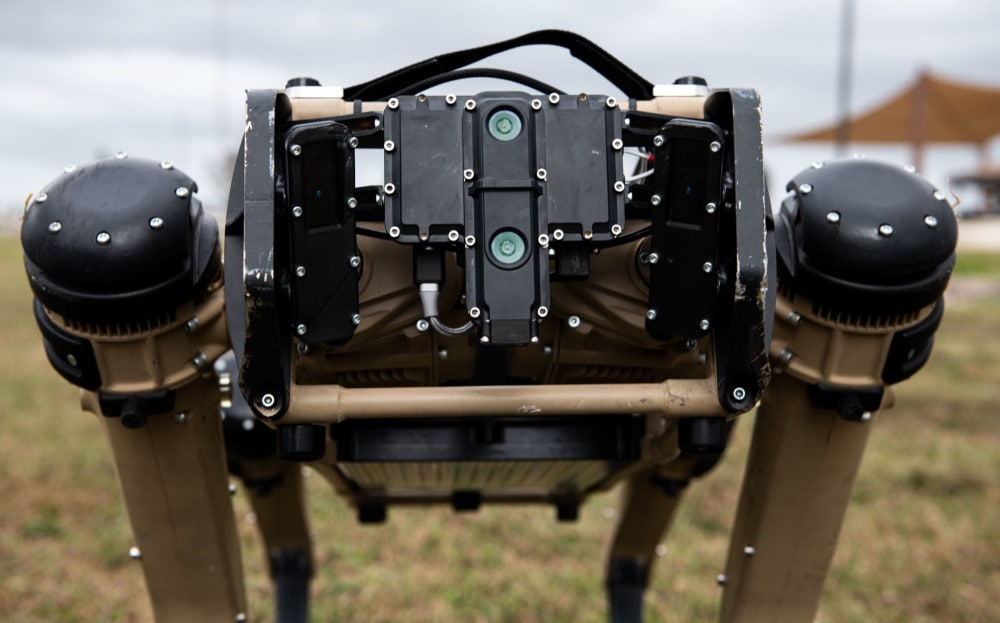 “This is a springboard into the future of integrated defense,” Criss said. “Rather than using a person, we can now leverage technology. We can use these robotic sentries to go out and sweep massive areas.”

The thinking behind using robotic dogs for security measures is to keep humans out of harm’s way. The robots can run for an extended period of time with a wireless charging doghouse.

The robots are designed for tasks such as remote inspection, intelligence, surveillance, reconnaissance, mapping, distributed communications and persistent security. The technology, along with other innovations, will replace and exceed the capabilities of static defense equipment, officials said. 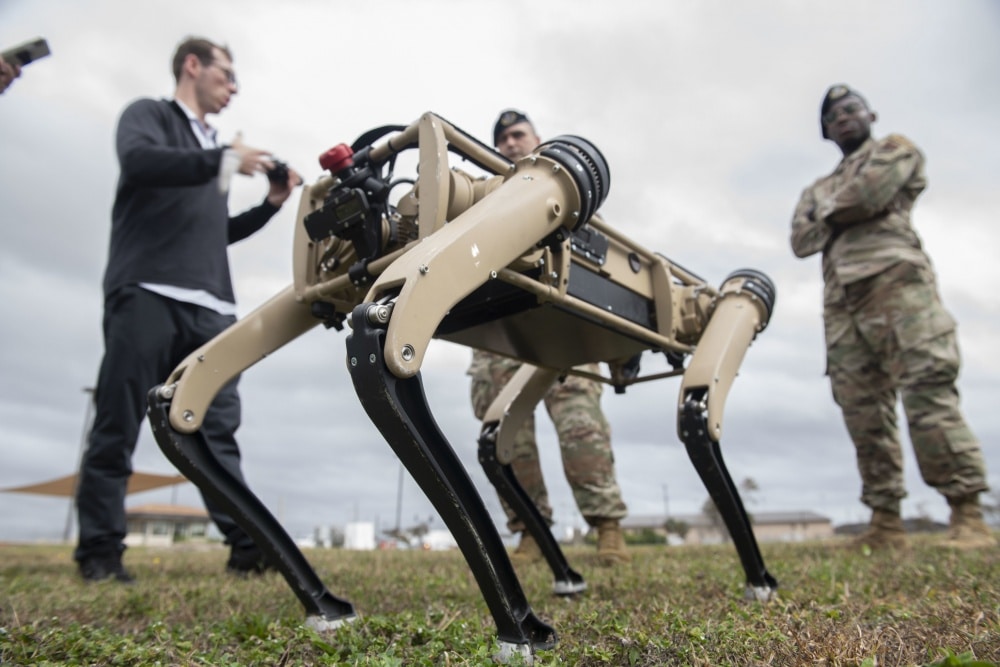 According to Ghost Robotics CEO Jiren Parikh, the robot dogs can cover 7.5 feet per second and the length of a football field in about 40 seconds.

Parikh said his company plans in the near future to have the robot dogs moving up to 10 feet per second.

It has been a long time coming. Ghost Robotics was started at the University of Pennsylvania by Gavin Kenneally, the company’s chief procurement officer. 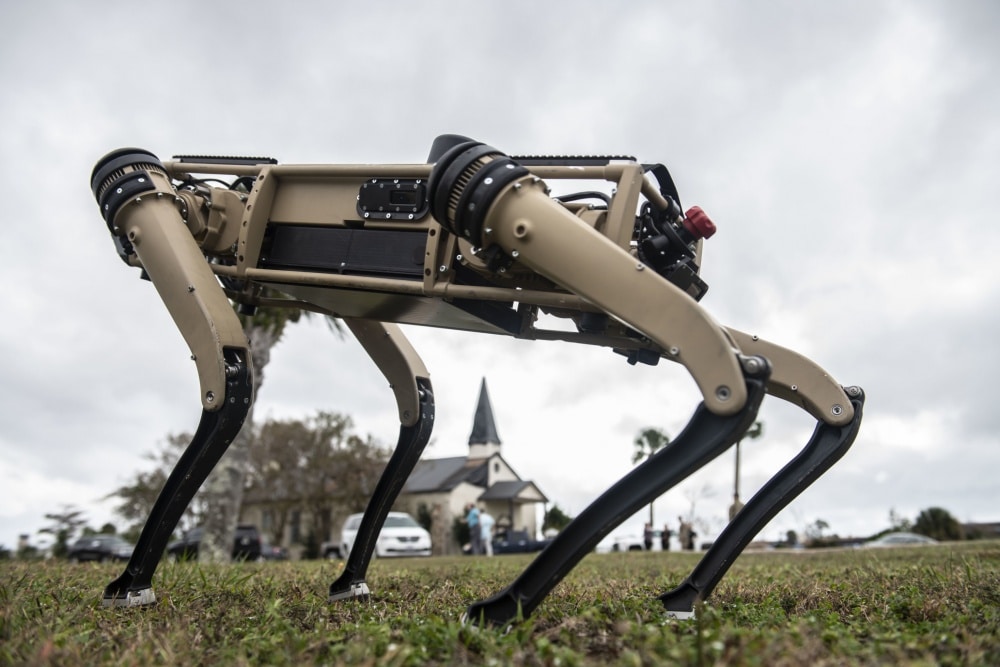 “They started developing the software of the electronics to build these systems more than decade ago,” Parikh said. “We started physically building these robots around 2017 or 2018, and we are about three months away from a commercial-ready robot, and our first deployment for security will be here at Tyndall.”

One robot, with all the software, wireless charging doghouse, sensors and radios will run from $100,000 to $250,000. The robots that will be installed at Tyndall will be weatherproof and can go through standing water.

The robots can turn themselves right side up after they have been knocked over on their backs. They can roam around for about 7.5 miles on a single charge. 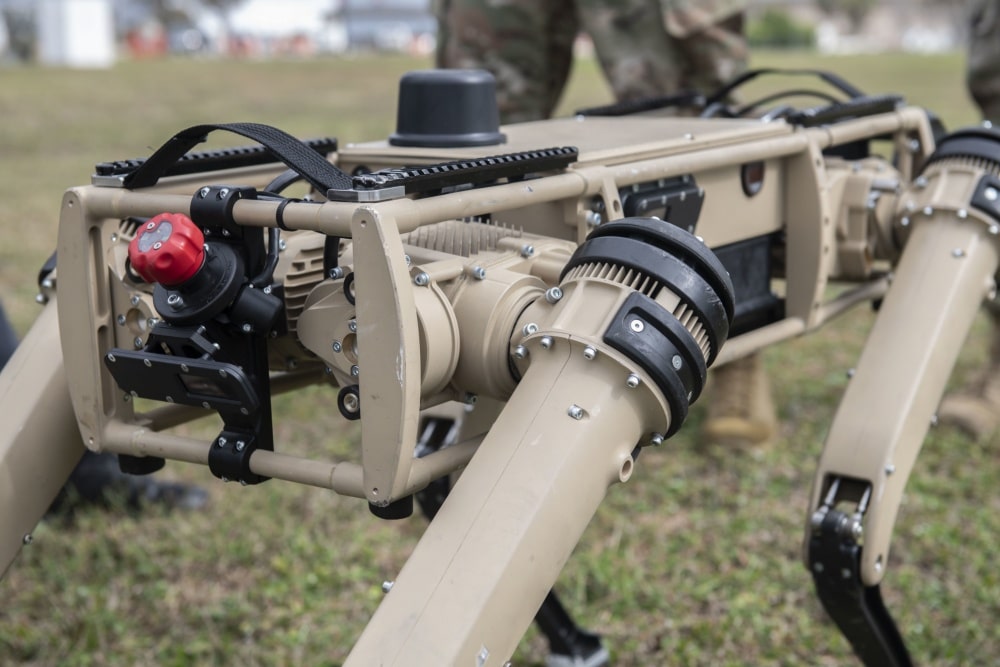 Parikh said the robots are friendly and are not a harm to humans, but can be dangerous if they’re messed with. He said they’re programmed to flail and can kick hard enough to fracture a femur bone. So, the robots can act like dogs.

Criss said that at the end of the day, Tyndall is building a base for the future and the robots are great example of that. Tyndall will test and evaluate this new technology to see if it is viable for the rest of the Air Force.