The first class of basic combat trainees to graduate wearing the new Army Green Service Uniform (AGSU) showed off their threads Nov. 16, during a ceremony at Fort Sill. 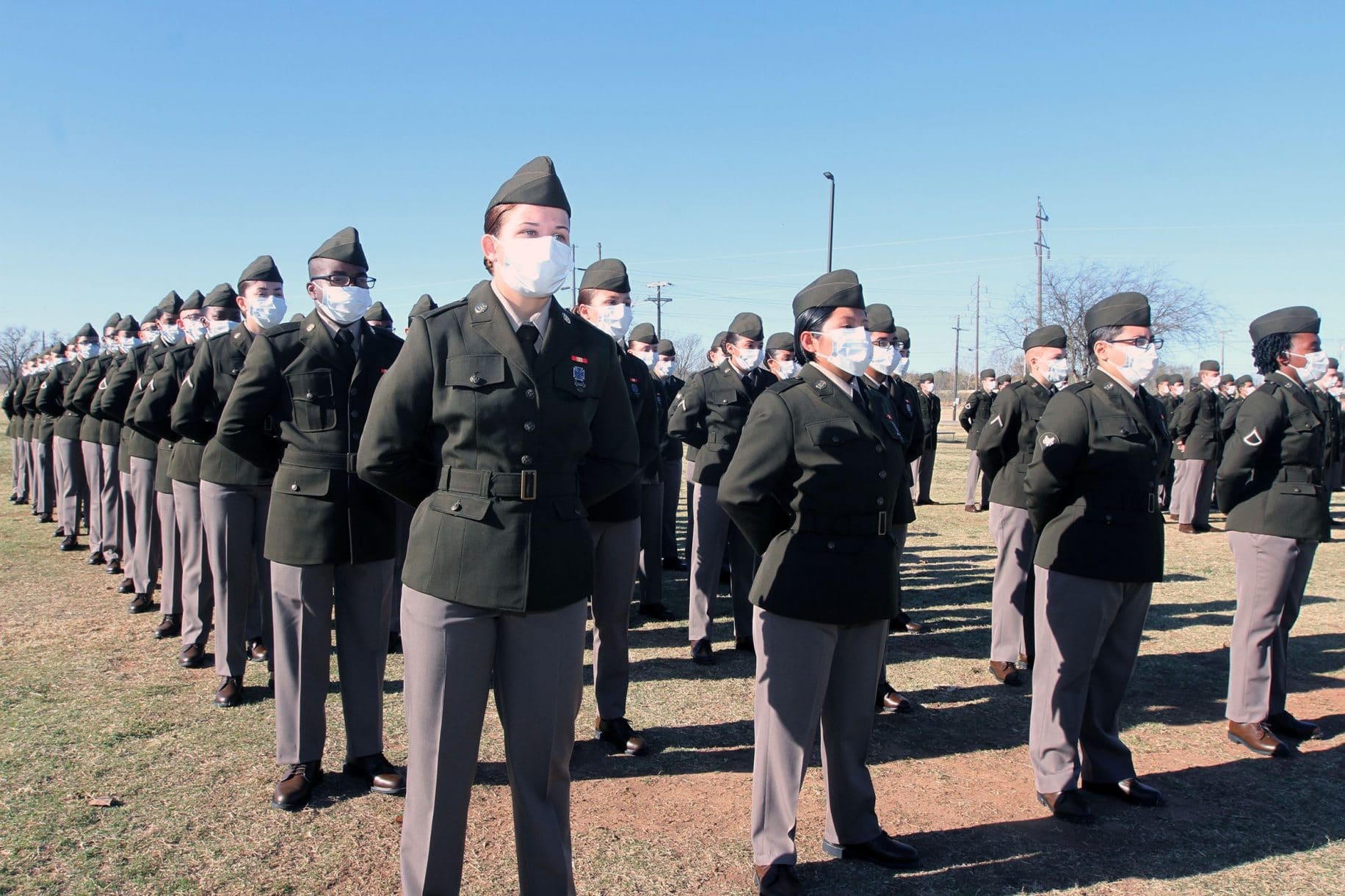 Soldiers in A/1-79th FA stand at parade rest before the start of their graduation ceremony Nov. 16, 2020 at Destroyer Park. (Jeff Crawley/Fort Sill Tribune)

“The Army’s greatest generation wore the iconic greens uniform when America was in the throes of World War II. Men like (generals of the Army Dwight) Eisenhower, (Omar) Bradley, and (George) Marshall wore it,” Carter said. “Now you, as our next great generation, are among one of the first in our United States Army to wear one of the most admired and recognizable uniforms in our history as it is being reinstituted to honor our heritage.

“While the Army Green Service Uniform invokes a feeling of nostalgia, it’s what’s under the uniform that counts,” Carter said. “The heart, the character, the grit, and the resolve of the American Soldier.” 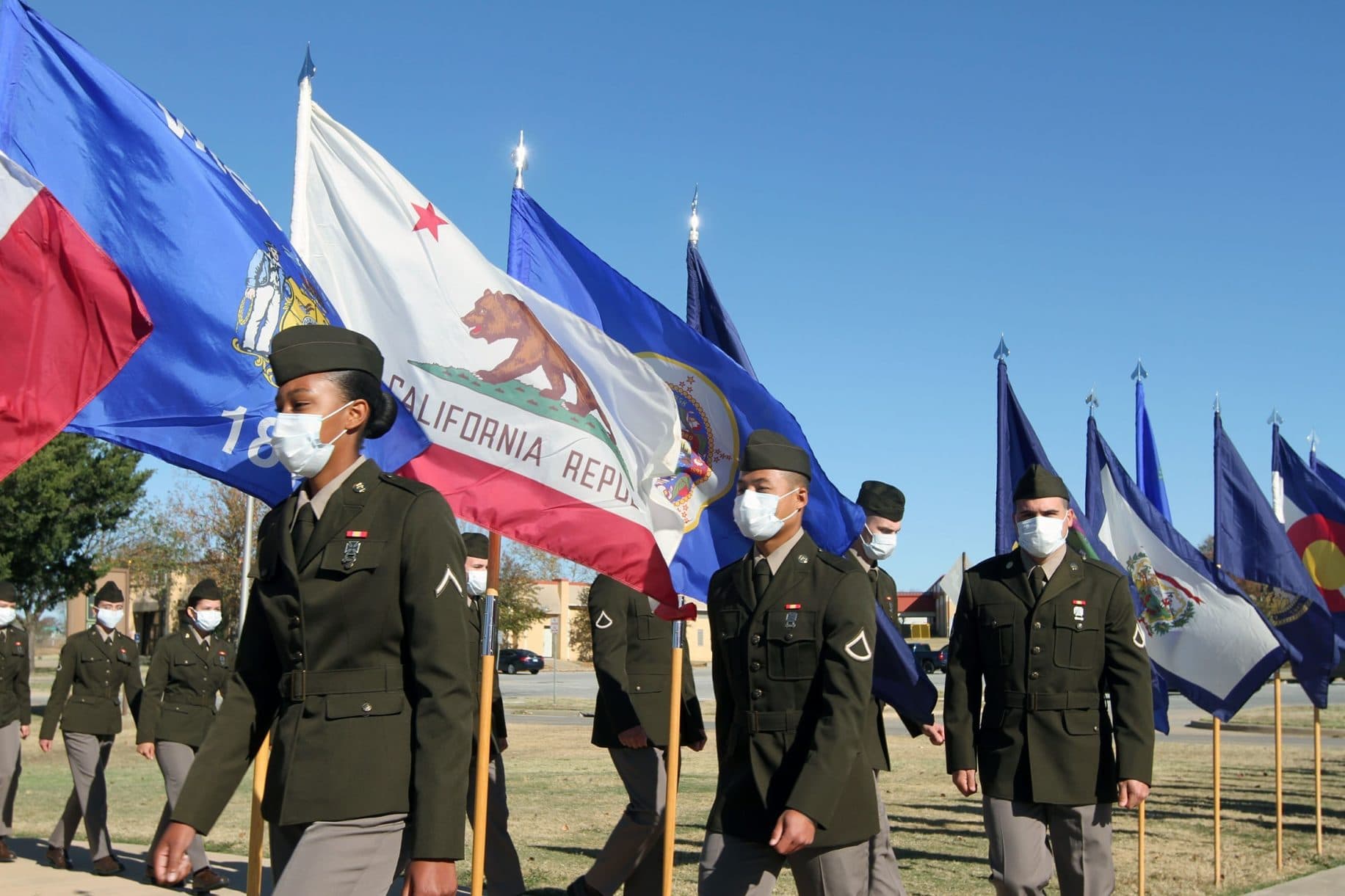 “They’re a lot easier for females to set up our ribbons and badges,” Ju said. “We just go off our pocket flaps.”

Senior Drill Sergeant (Sgt. 1st Class) Antrell Bender, A/1-79th FA, said the trainees received the AGSU Oct. 14. They learned about the historical significance of the uniform. And, last week they were shown how to properly wear the uniform with adornments.

“On Saturday morning (Nov. 14), a final inspection was given to identify any deficiencies,” Bender said.

He noted that since it was the trainees’ first dress uniform they don’t have anything to compare it to, but for him, it’s the third dress uniform he has worn in his career.

“I’ve been in since we had the green dress uniform, then we switched over to the ASUs (Army Service Uniform),” Bender said.

Graduate Pvt. Rebeca Beaird, age 19, from Houston, recalled what she and some of her fellow trainees thought when they were first issued their AGSUs.

“A lot of us were thinking: Oh, Captain America, Like yea! We get to be there,” said Beaird, who will go on for further training at Fort Sam Houston, Texas, to become a behavioral health technician.

She said the AGSU is about building on the women’s legacy in the Army.

“Soldiers who wear this uniform are going to be honored to wear them,” she said. “Veterans who wore them will be happy to see us bring it back.”

Graduate Pfc. Tyree Smith, 20, of Indianapolis, said he was honored to be in the first class to graduate with the AGSUs. He said the uniform makes him feel like a man, ready to achieve.

Smith moves on to training at Fort Leonard Wood, Missouri.

Col. Daniel Blackmon, 434th FA Brigade commander, said the AGSU is special for him because his father and grandfather served in the Army and wore similar uniforms.

He said he’s heard a lot of positive comments when wearing his AGSU. “One, the history, and two, just the way it looks.”