Originally built in 1962 and delivered to the Air Force as a KC-135 Stratotanker, the aircraft was first converted to an EC-135 Looking Glass before its transition into its WC-135 configuration in 1998. 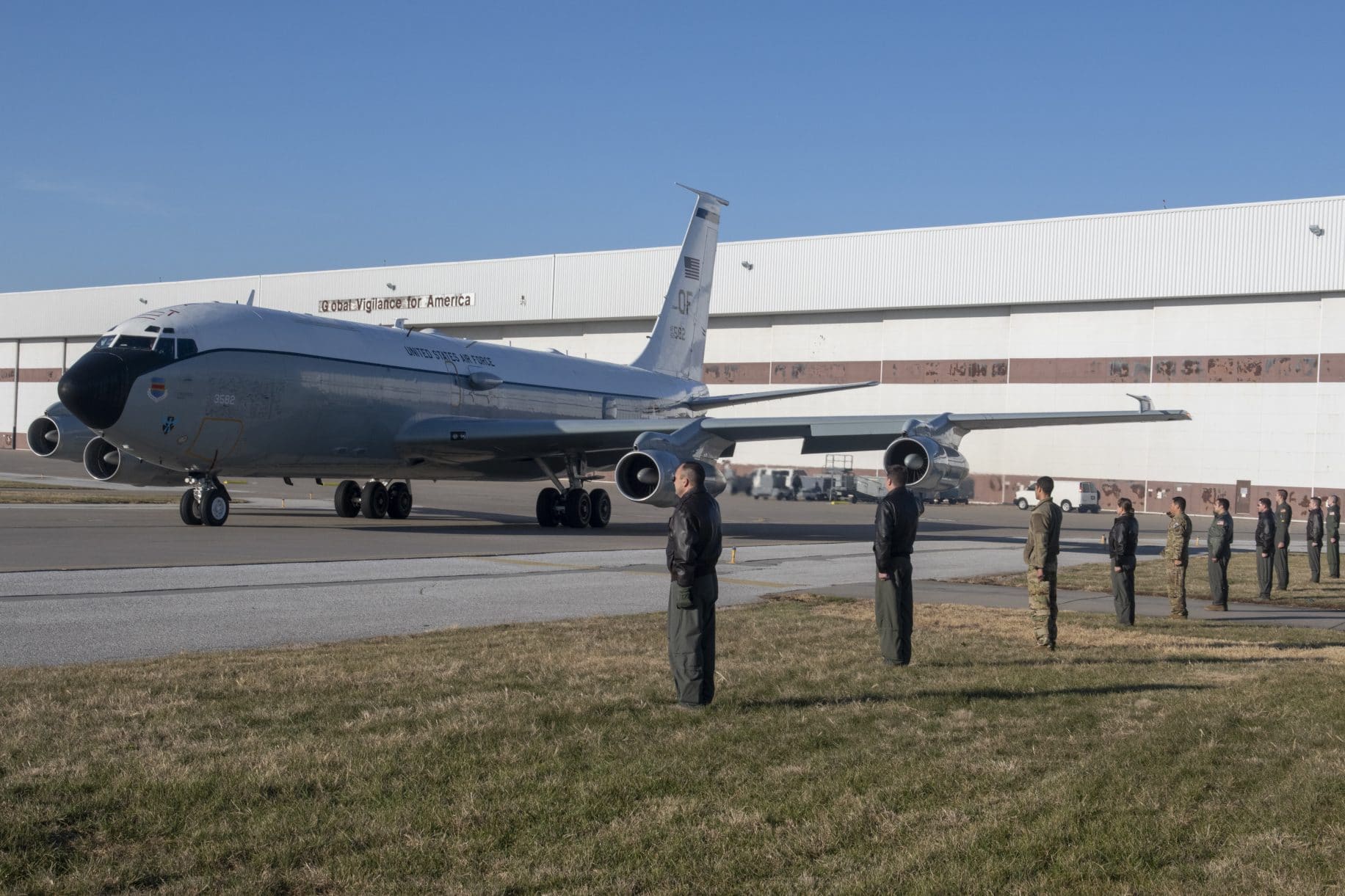 “Eventually all good things come to an end,” said Col. John Litecky, 55th Operations Group commander. “All in all, tail 582 has flown over 29,689 hours, which includes 72,251 landings for our Air Force in all her shapes and forms, and we are truly grateful for her service.”

One of only two WC-135s in the entire Air Force inventory, the fleet is scheduled to be replaced by the end of 2022 by three new WC-135Rs, which are converted KC-135R tankers.

“This particular WC-135 aircraft has proven finicky over these last two decades for our crews and maintainers,” said Lt. Col. Andrew Maus, 45th Reconnaissance Squadron commander, “but nonetheless, it served our mission well.”

The aircraft is now at Majors Airport in Greenville, Texas, before it heads to the boneyard at Davis-Monthan Air Force Base, Arizona.

“Parts of this aircraft, such as the air foils and some other mission equipment, will be taken off and utilized on the new WC-135Rs, which will be soon delivered from the Big Safari team,” Maus said. 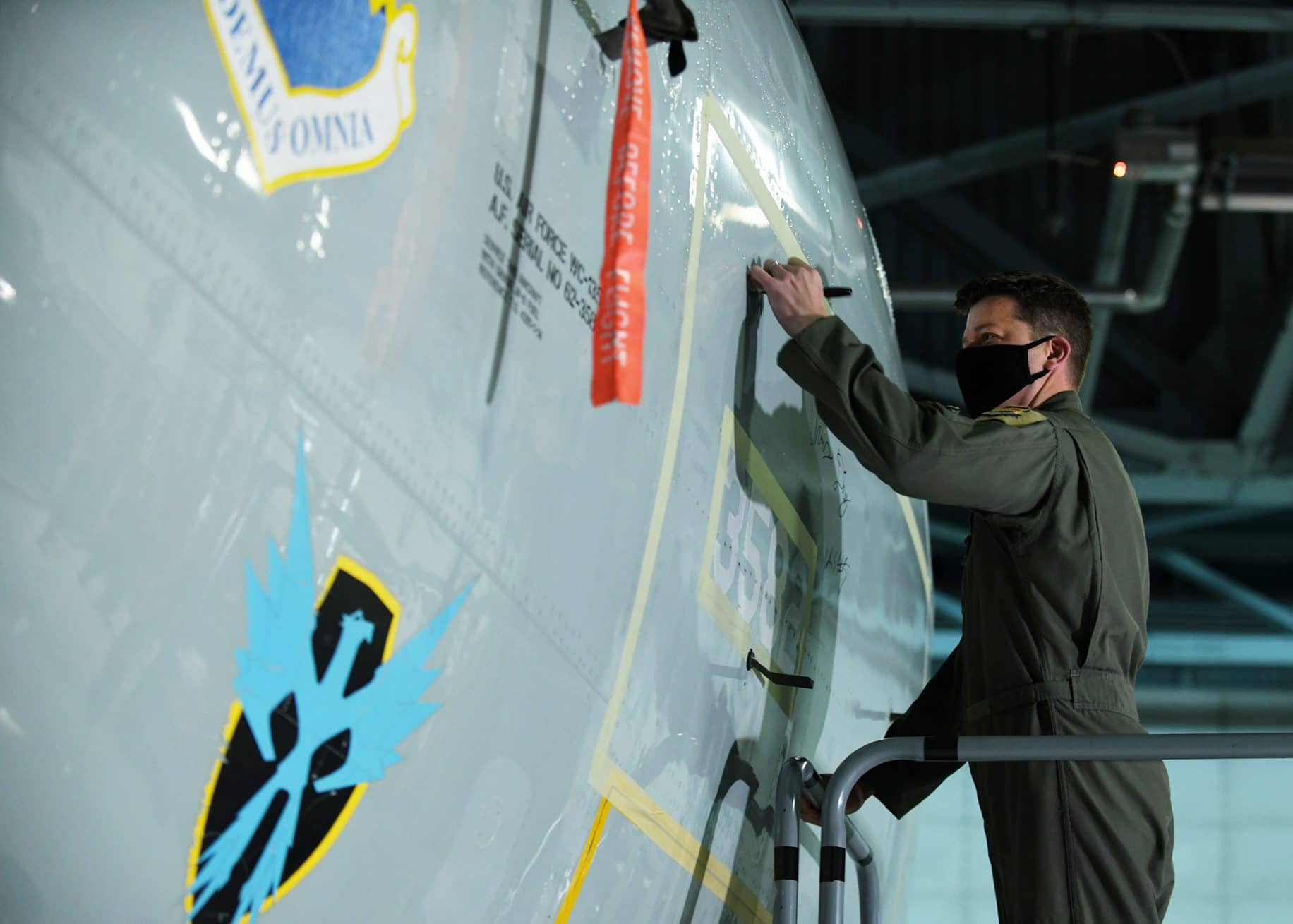 The aircraft’s official final flight with the 45th RS, commonly known across the Air Force as its fini-flight, took place Nov. 2, 2020. Upon landing, 582 received the traditional water salute, where two firetrucks shoot water over the aircraft, creating an archway.

“It was a very fitting send off,” said John McQueney, 55th Wing historian. “The last time the wing retired an aircraft here at Offutt was in 1998, so this is a very rare occurrence.”

Over the past 22 years, 582 has supported the Limited Nuclear Test Ban Treaty of 1963 by conducting atmospheric collection. The 45th RS has flown the aircraft roughly more than 1,300 time, with members of Detachment 1, Air Force Technical Applications Center serving as special equipment operators collecting particulates and gaseous effluents and debris across the globe.

“This aircraft has served an important role in our nation’s nuclear treaty and collection missions,” said Lt. Col. James Smith, AFTAC Det. 1 commander. “While the aircraft did provide its share of challenges from time-to-time, we always accomplished our mission.  She will be missed, but we are looking forward to accomplishing the AFTAC mission on our new aircraft.”

During its official retirement ceremony inside the Bennie L. Davis Maintenance Facility Nov. 13, 2020, many current and former aircrew members from both the 45th RS and AFTAC Det. 1, roasted the aircraft, recalling many of its unique hang-ups.

“Almost everyone who has served on this aircraft can tell you there, ‘so there I was,’ story about a mission they served on,” Maus said. “Although every aircraft has an identity that’ll set it apart, 582 was certainly unique.”

Trump to roll out stiff bond requirements for visitors from 'overstay' countries, including Iran