As Doug Hurley and Bob Behnken splashed down into the Gulf of Mexico, book-ending the first crewed launch from American soil in almost a decade, the astronauts who would follow them were watching from NASA’s Houston control center in awe.

America’s Mike Hopkins, Victor Glover and Shannon Walker and Japan’s Soichi Noguchi had already been selected to succeed Hurley and Behnken’s historic flight, the beginning of a new era of routine crewed commercial launches from the United States after the space shuttle program ended in 2011.

And that cannonball return was the final test.

“To be able to watch our colleagues, our friends come home safely is always an emotional event,” Walker said just hours after Hurley and Behnken emerged from the Crew Dragon capsule. “And then just to see how smoothly everything went during their splashdown and their re-entry, we’re very excited that it went as smoothly as it did because now that really points to how successful our mission will be when we get a chance to launch.” 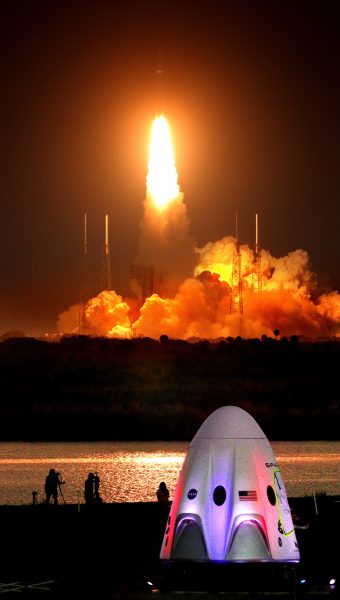 Now, that chance has arrived. The crew of four will ride the same model capsule to the International Space Station on Sunday, if schedules hold, launching from Kennedy Space Center at 7:49 p.m. They’ll reach the ISS about eight hours later and stay at the station for six months before flying back to Earth.

They’ll join three astronauts already on board the ISS, Kate Rubins, Sergey Ryzhikov and Sergey Kud-Sverchkov who arrived in October by Russia’s Soyuz MS-17 spacecraft. The launch was originally scheduled for Saturday evening, but was delayed because of “onshore winds and recovery operations,” NASA administrator Jim Bridenstine tweeted.

Benji Reed, SpaceX’s director of crew mission management, said the Crew-1 launch will be the start of a rapid cadence of crewed and cargo launches, bringing a continuous SpaceX presence at the ISS. Over the next 14 months, he said, SpaceX plans to launch at least seven times to the space station.

Another group of astronauts has already been selected to pilot the Crew-2 mission, which is slated to leave Cape Canaveral next spring using the very capsule Hurley and Behnken splashed down in and a refurbished booster from Crew-1.

“This represents the culmination of many, many years of work between the joint teams at NASA and SpaceX putting together this whole commercial crew program, which has really been on the development and test stage through now,” Reed said. “Bottom line is we’re here to provide transportation services to keep the ISS staffed and to provide the cargo that ISS needs. So this really is a new era for us as a company, for SpaceX and also for commercial space in general.”

For Hopkins, a Missouri native and Air Force lieutenant who will command the mission, being able to get advice from his Crew Dragon predecessors has helped him prepare. Hurley and Behnken told him about the animal-like sounds the Falcon 9 rocket makes as it’s fueled and the rapid descent from orbit into the water.

“You get to hear the little details that don’t show up in a training program or a training lesson, and some of those things are simple, some of those may not seem like a lot, but they can be very important,” Hopkins said.

The father of two became an astronaut in 2009, after serving as a second lieutenant in the Air Force and playing football at the University of Illinois. In 2013, he flew aboard the Soyuz from Kazakhstan to the ISS, where he performed two spacewalks and logged 166 days in space.

Walker, a physicist from Texas, and Noguchi with the Japan Aerospace Exploration Agency, have also clocked extensive time in space.

Walker spent 163 days at the ISS as flight engineer for Expedition 24/25 in 2010 and has worked at the Johnson Space Center since 1987. Previously, she was a robotics flight controller for the Space Shuttle Program.

For Noguchi, a dad of three, SpaceX’s Falcon 9 will be the third spacecraft he’s ridden to space. In 2005, he flew on the shuttle Discovery — along with Walker’s husband and fellow astronaut Andy Thomas — as part of America’s “return to flight” after the Challenger explosion.

And in 2009, he came the first Japanese “left-seater” on the Soyuz, meaning he could pilot the craft if needed, when it launched to the ISS for Expedition 22/23.

He helped achieve another milestone when JAXA astronaut Naoko Yamazaki later arrived at the ISS, marking the first time that two Japanese astronauts worked together in space.

Glover, or “Ike” as he’s called by his crewmates, is the rookie of the team, having never been to space. A native Californian and father of two, Glover became an astronaut in 2013 after serving as a test pilot for the Navy. He’ll be the first African-American to fly on a long-duration crewed mission to the ISS.

“It’s hard to put it into words really. The thought of flying here and rocketing out, it’s just surreal, it really is,” Glover said after arriving in Florida. “I wake up and I go, ‘I really am at Kennedy Space Center.'”

Although Sunday’s mission could bring many firsts, the crew said it also wanted to honor the traditions of their predecessors. They’ve already selected a name for their Dragon Capsule, Resilience, a nod to the difficult year 2020 has been.

“It’s been a tough year for everybody for a lot of different reasons,” Hopkins said, citing the global pandemic, isolation of quarantine and nation unrest amid a tumultuous election year. “And we felt like if the name of our vehicle could give a little hope, a little inspiration, put a smile on people’s faces, then that is definitely what we wanted to do.”

They’ve also picked a token to bring along as their zero-g indicator, which lets them know when they’ve traveled far enough into space to experience weightlessness. They’re keeping the item under wraps until after liftoff, though.

Speaking to reporters this week, Hopkins said he and his colleagues will walk out to the launch pad — the same one Hurley and Behnken lifted off from in May — with “absolute faith and trust” their mission will be successful.