This article was originally published by the US Army.

Active-duty command teams now have a new tool to help give them more visibility on Soldiers who exhibit high-risk behaviors, as part of the Army’s effort in placing greater emphasis on its people.

The Commander’s Risk Reduction Toolkit, or CRRT, is a web-based system that helps command teams from the company through the corps level assess unit readiness with reports on suicide, drug and alcohol use, and criminal history. It also supplements the command teams’ ability to develop a consolidated overview of risk history and unit trends while allowing them to develop strategies to strengthen units, said Randy Lane, chief of Army Resilience Directorate’s assessments division.

The Army has already fielded CRRT to active-duty units, with plans to distribute the system to the National Guard and Army Reserve before the new year. 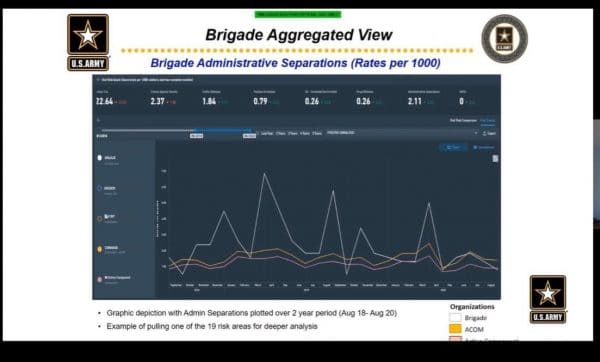 The common access card-enabled system collects data from 27 sources across the Army while displaying up to 40 risk factors at a time. CRRT provides information on demographics, deployments and health, and it also contains charts showing unit trends such as administrative separations and other risk events.

To build the new CRRT, the Army upgraded the former Commander’s Risk Reduction Dashboard and consolidated it within the new Army Vantage system to create a single system commanders can access faster and more easily.

Lane said this capability, which has been in development for six years, also provides company and battalion command teams with individual Soldier data that can help identify strong performers who may be able to increase readiness and curb risk behaviors in the unit.

“It’s not intended to [evaluate] Soldiers,” Lane said during an Association of the U.S. Army Annual Meeting and Exposition discussion on Oct. 14. “[CRRT] is only there to allow the leaders to see a more comprehensive picture of their Soldier and help them make informed judgements on their ability to lead inside the formation, and possibly reduce risk across their formation.”

One of the system’s primary goals is to prevent high-risk behaviors such as alcohol abuse and violent criminal acts. Lane said the preponderance of the data will help provide a more comprehensive picture and warning before those behaviors manifested themselves.

“As we move forward, we will start to see those risk factors that are supported by the data elements,” he said. “The question is centered on [when] that will start to actually emerge as potentially of greater importance or have the ability to inform leaders to take a more proactive strategy to intervene and prevent undesirable or high-risk behaviors.”

Lane said access to Soldier-level risk data and limited protected health information under the Health Insurance Portability and Accountability Act will be limited to company and battalion command teams.

“The system was never intended to turn the company commanders, first sergeants and sergeants major into subject-matter experts,” Lane said. “It was only designed to alert those leaders that there may be a problem and try to bring together many of the different behaviors and risk factors so they could see the potential interaction of those factors.”

Lane added that the CRRT is developing a test system for training purposes while teaching installation risk reduction program coordinators to become the primary trainers of the system.

He emphasized that the Army designed the system to assess and prevent high-risk behaviors, not for promotion evaluation purposes.