The Defense Department is working to ensure the transition to the administration of President-elect Joe Biden is a smooth one, Pentagon officials said today. 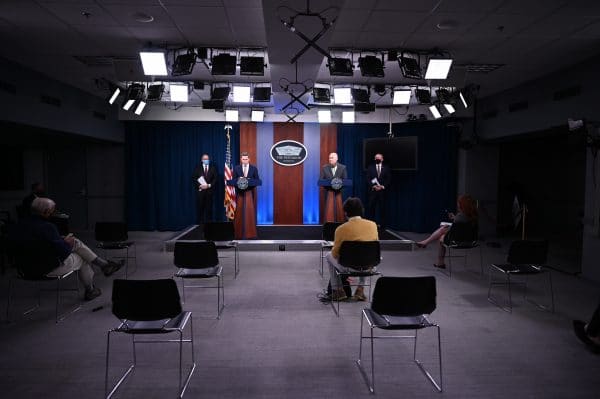 Muir said in a Pentagon press conference that he is operating under the Presidential Transition Act of 1963, and that the department has been preparing for transition since June. “We have a DOD policy that guides our actions during transition activities,” he said.

Members of the Biden-Harris agency review team will receive office space in the Pentagon and briefings from military and civilian leaders. “We’re looking forward to continuing the process with the Biden-Harris transition team in the near future, and throughout the transition period,” Muir said.

The DOD is a huge department and it changes. The transition team has provided the Biden-Harris team with interim transition books, with primers detailing the organizational structures, budget, missions and charters of the department.

This includes the military departments, the Joint Staff, the National Guard Bureau and the Office of the Secretary of Defense components. “It is a very detailed, elaborate and deliberate system [for transition],” Muir said.

Contact between the department and the Biden-Harris transition team will grow. “Those will be daily discussions moving forward likely, and will be responsive to the requirements, while ensuring that we implement the national defense strategy of the United States during this time of vulnerability for a nation,” Muir said.

Is Santa safe from coronavirus this Christmas? Fauci, NORAD, others weigh in on 2020 holiday