Unknown Soldier from World War I being taken from the USS Olympia at the Washington Navy Yard and transported to the US Capitol to lay in state. On November 11, 1921 the body was intered at Arlington National Cemetery (Photo by E.B. Thompson/Public Domain)
November 09, 2020 Ryan Morgan
Share
Tweet
Flip

On Nov. 9, 1921, the body of the U.S. soldier that now rests in the Tomb of the Unknown Soldier returned to the U.S. from France, where he died in the fighting of World War I.

According to the U.S. Naval History and Heritage Command, the USS Olympia set sail on Oct. 3 and arrived in France on Oct. 24 of 1921. That day, U.S. Army Sgt. Edward F. Younger was tasked with selecting one of four unidentified American servicemen, in four identical caskets, to become America’s Unknown Soldier, meant to represent all of America’s unidentified war dead. Younger, himself a twice-wounded veteran of World War I, chose the third casket from the left of the row of four caskets, laying a bouquet of white roses on that soldier’s casket and designating them the Unknown Soldier. 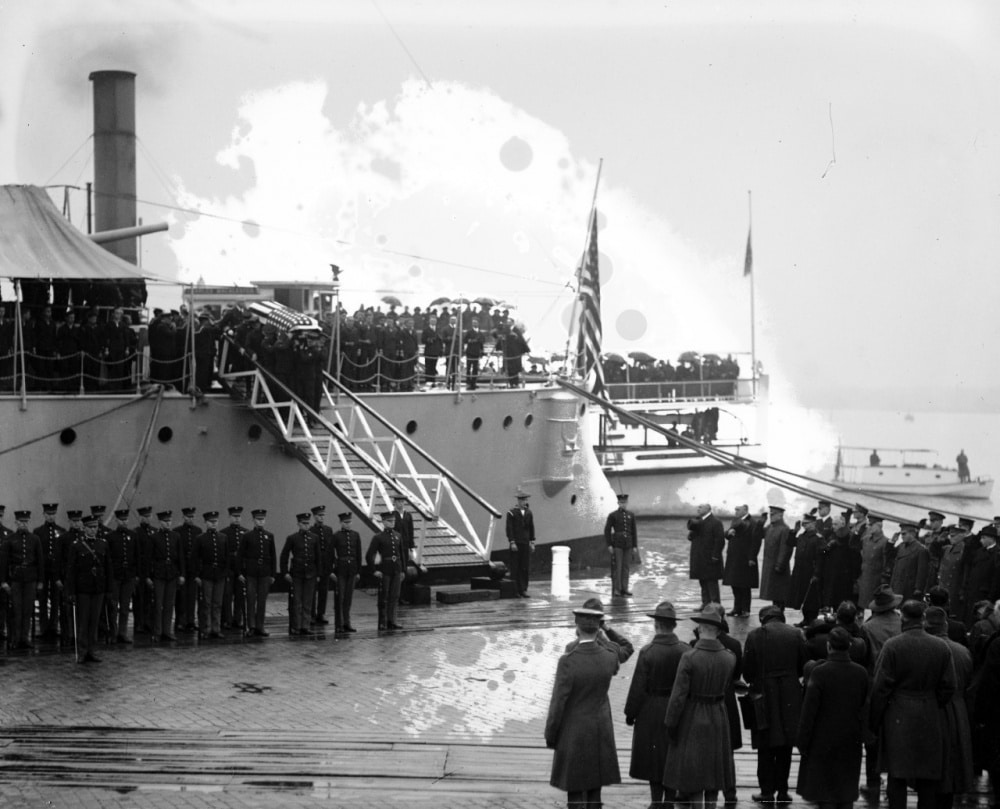 Crew if USS Olympia man the rails as the Unknown Soldier is returned to the U.S. at the Washington Navy Yard, Nov. 9, 1921. (U.S. Naval History and Heritage Command photo/Released)

On Oct. 25, the remains of the Unknown Soldier was brought to Pier d’Escale in Le Havre, where people from across France had gathered to pay their respects to the soldier. The crew of the USS Olympia had meticulously cleaned the ship from top to bottom, in preparation for the arrival of the Unknown Soldier.

As the soldier was brought aboard the USS Olympia, a ship’s band played a rendition of the French National anthem “La Marseillaise,” which segued into the “The Star-Spangled Banner.” After the Unknown Soldier’s casket was secured to the deck of the ship, crowds of clergy, school children, war widows, and French civic organizations came aboard the ship and showered the flag-draped casket with flowers. The Unknown Soldier had also been awarded the National Order of the Legion of Honor, the highest French order for military and civil merit.

Following his arrival in the U.S., the Unknown Soldier was brought to lay in state in the U.S. Capitol Rotunda, where he was kept from Nov. 9 to Nov. 11, according to the Architect of Congress. 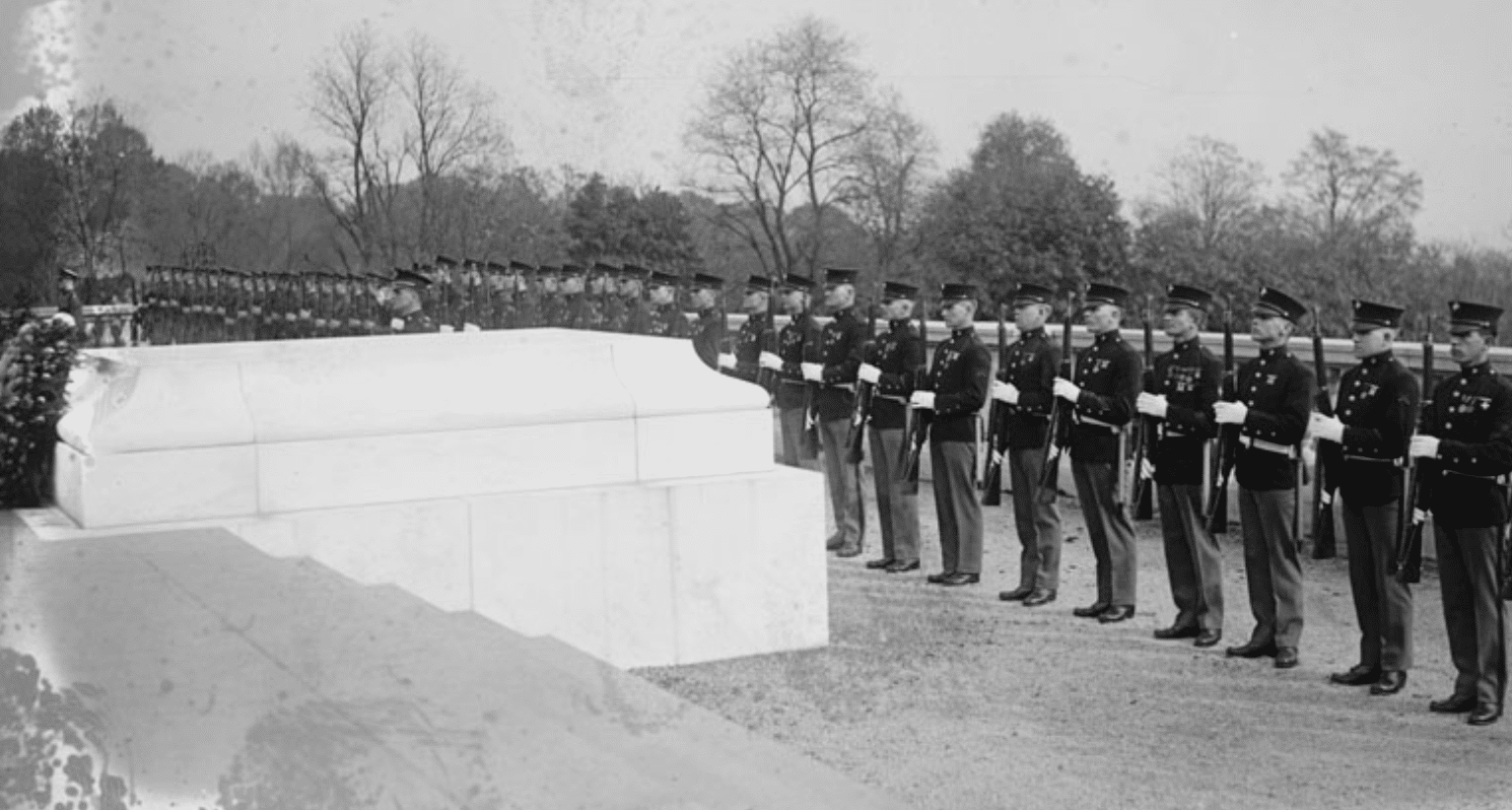 Tomb of the Unknown Soldier, Arlington National Cemetery, on 11 November 1922. View is of the south side of the Tomb looking north. (Herbert French, Library of Congress, Public Domain.)

According to Arlington National Cemetery, around 90,000 visitors lined up to pay their respects to the Unknown Soldier as his body was kept in the Capitol Rotunda.

Armistice Day would later come to be celebrated in the U.S. as Veterans Day.

The tradition of honoring subsequent Unknown Soldiers has continued, with the U.S. honoring selecting two Unknown Soldiers of World War II, one from the European and one from Pacific theater of war, and another U.S. service member from the Korean War. An Unknown Soldier was designated for the Vietnam War, but was later exhumed and positively identified as 1st Lt. Michael Blassie, according to U.S. government records. Blassie’s remains were returned to his family. 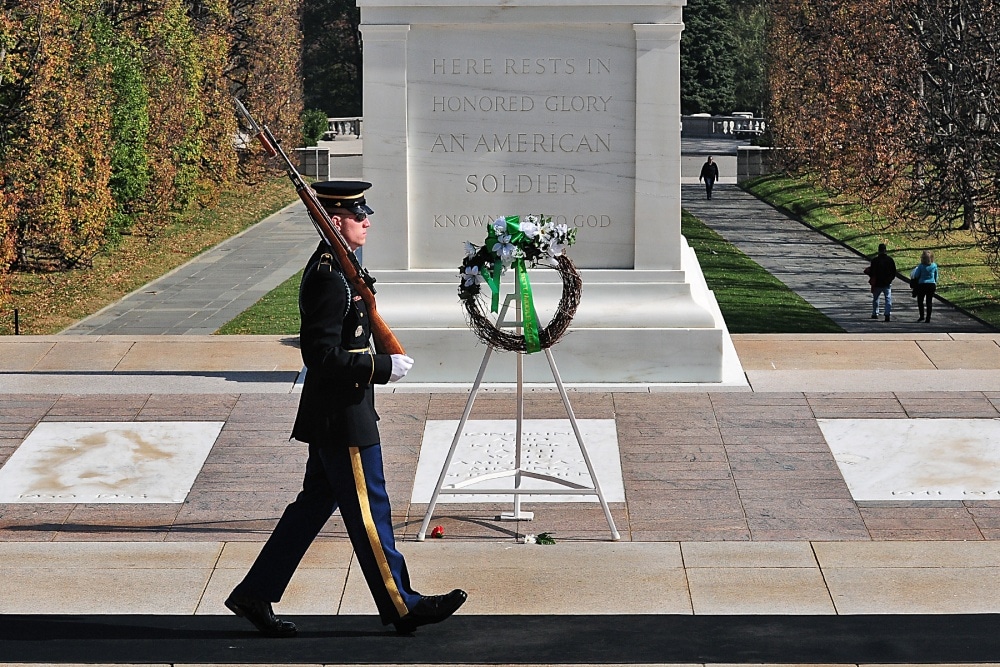