They were decorated soldiers, sailors, airmen and marines who fought for their country and returned from overseas to build rich civilian lives.

The Holyoke Soldiers’ Home Coalition has posted a virtual tribute to dozens of veterans who died after contracting coronavirus during the pandemic. (Relatives who would like their loved ones included in the tribute can visit the coalition’s website, holyokesoldiershomecoalition.org.)

The pictorial — which went live in advance of Veterans Day on Nov. 11 — also honors five more who died of other causes while at the state-run care facility for veterans, and one resident who still resides there. 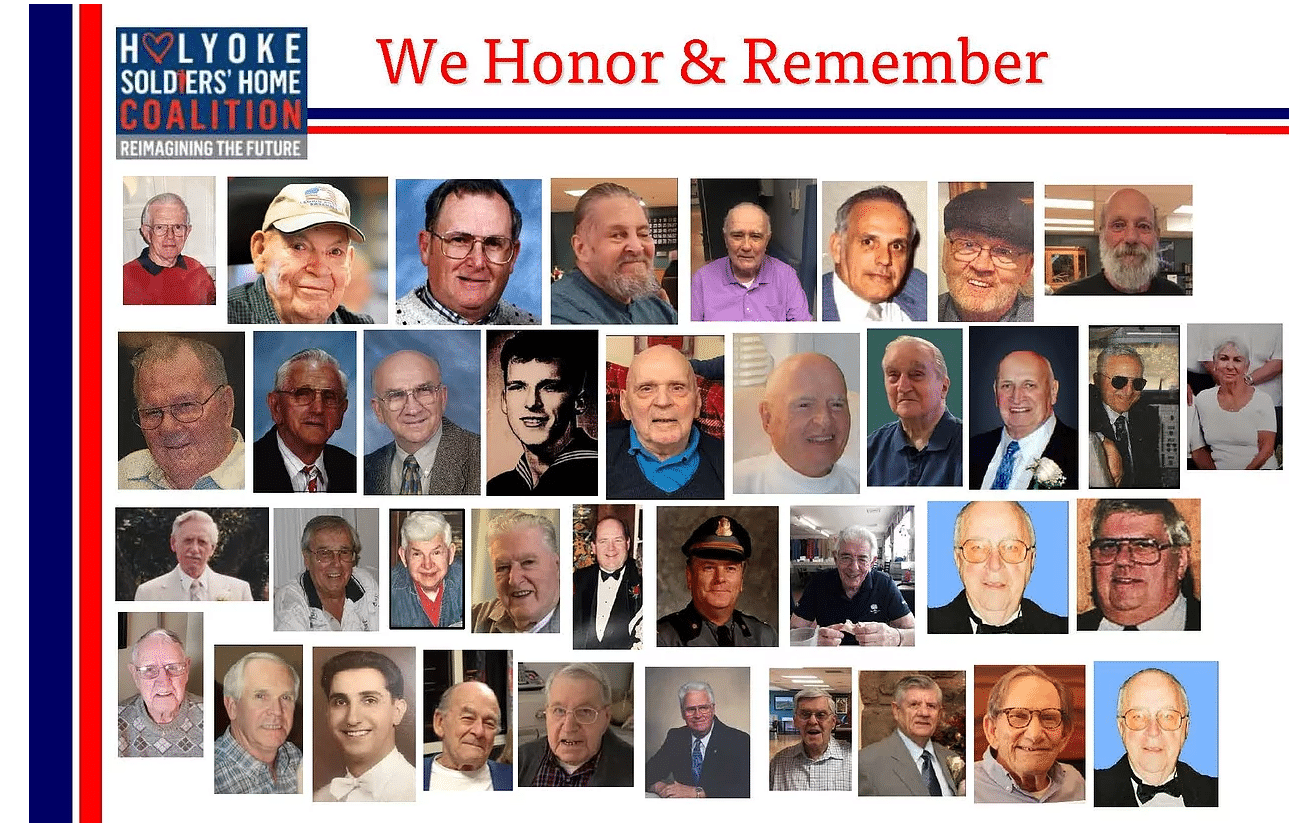 Veterans who died of COVID-19 or from an illness while under the care of the Soldiers’ Home in Holyoke during the period from March through July of 2020. (Holyoke Soldiers’ Home).

The coalition is a grassroots network of veterans’ advocates, family members and other supporters of the Soldiers’ Home since its patients and staff were ravaged by the outbreak this spring.

At least 76 veterans died of the virus while under the care of the Holyoke Soldiers’ Home. Many more were sickened.

“Our Coalition hopes the public takes the time this Veterans Day to remember all of these veterans — all were sons and daughters of our Commonwealth who left home at an early age to serve our great nation. For those who died during this pandemic, we ask that you think not only of their passing by also remember their glory and spirit,” an announcement by the coalition read.

The veterans featured in the tribute fought during World War II, the Korean War and in the jungles of Vietnam. Some were radio operators, aerospace engineers and specialists.

One late veteran, Emilio “Leo” DiPalma of Springfield, was a World War II sergeant in the Army and served as Sergeant of the Guard during the Nuremberg Trials. His likeness is memorialized with a wax figure in the Holocaust Museum in Virginia.

“Leo was a kind, humble family man. His top priority was caring for his wife and four daughters,” DiPalma’s post reads.

The men who lost their lives to the virus went on to become teachers, carpenters, members of law enforcement, civil servants and more. They married and had children, grandchildren and great-grandchildren. Some of the tributes touch upon the late veterans’ hobbies, senses of humor and endearing quirks.

Robert Lapinski, 75, of Montague, was an avid train enthusiast. Samuel Lococo, 96, of Northampton, was called “Poppy” by his eight grandchildren, with whom he liked to “play silly, made-up games.” James Mandeville, 83, teased his daughter by stacking the deck when they played cards.

“He always made me feel like I was the most important person in the world,” Mandeville’s daughter, Laurie Mandeville Beaudette, wrote in his tribute.

The Holyoke Soldiers’ Home Board of Trustees will hold its monthly meeting tonight. On the board’s public agenda for discussion are plans for both a temporary and permanent memorial for COVID-19 casualties.