The Navy is retooling to counter a rising China heavily focused on advanced missiles and a strategy of defeating the United States in a conflict near Taiwan or in the South China Sea.

That change has brought an emphasis on expeditionary resupply far from established bases and a growing demand for unmanned ships and other assets to keep up with China’s growth.

The Navy said its ballistic missile submarines, often referred to as “boomers, ” serve as an undetectable launch platform for submarine-launched ballistic missiles. The subs are designed specifically for stealth and the delivery of nuclear warheads. 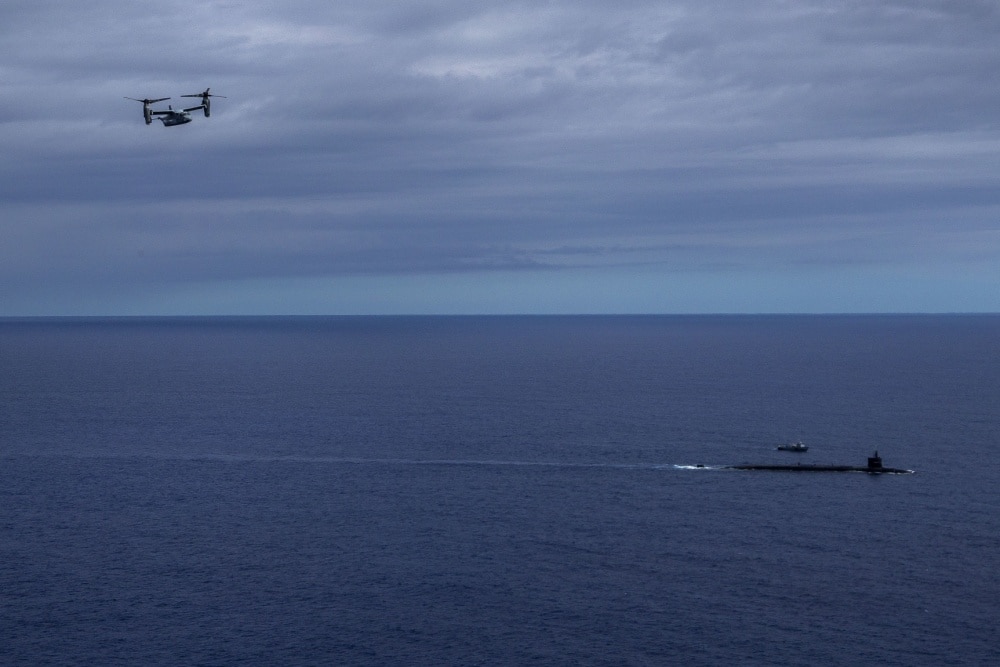 Each of the 14 Ohio-class ballistic missile subs originally carried up to 24 SLBMs with multiple, independently-targeted warheads.

But under provisions of the New Strategic Arms Reduction Treaty, each submarine has had four of its missile tubes permanently deactivated and now carries a maximum of 20 missiles, according to the Navy. The subs are armed with the Trident II D5 missile.

The ballistic missile submarine USS Henry M. Jackson out of Bangor, Wash., practiced resupply Monday of a small package from a quadcopter drone. “The event was designed to test and evaluate the tactics, techniques and procedures ” of U.S. Strategic Command’s expeditionary logistics, the Navy said.

On Tuesday the “Easy Riders ” of Helicopter Maritime Strike Squadron 37 delivered a larger bundled payload using a sling and netting from a Sea Hawk helicopter.

A day later, a tilt-rotor MV-22 with the “Lucky Red Lions ” out of Kaneohe Bay made a similar delivery. Mokapu Peninsula, where the Marine Corps base is located, can be seen in the background in some of the photos released by the Pacific Fleet submarine force.

Defense Secretary Mark Esper said at an Oct. 6 Center for Strategic and Budgetary Assessments event that he has focused the Defense Department on China, is strengthening allies and building partners and is updating key war plans.

His proposed Battle Force 2045 calls for a more “balanced ” Navy of over 500 manned and unmanned ships and the introduction of 60 to 70 smaller combatants into the fleet.

“The challenge before us today is clear. Near-peer rivals—namely China and Russia—are rapidly modernizing their militaries in an effort to erode our longstanding advantages and shift the balance of power in their favor, ” Esper said. “They want to rewrite the international rules especially in areas such as freedom of navigation and commerce and are willing to do so at the expense of others.”

Esper said the future force will comprise between 140 to 240 unmanned and optionally manned surface and sub-surface vessels of all types with the potential to perform missions ranging from resupply and surveillance to mine laying and missile strikes.

About a year ago, in what was then a first for the Navy, a quadcopter drone was flown more than a mile from shore on Oahu to deliver a 5-pound payload of circuit cards, medical supplies and food items to the Virginia-class submarine USS Hawaii.

A large percentage of parts that are needed on submarines weigh less than 5 pounds, and drone delivery could remove the need to pull into port for some parts or medical supplies, the Navy said at the time.

On Aug. 5, the Henry M. Jackson, commissioned in 1984, completed a feat the Navy said few other submarines have accomplished : a 100th strategic deterrence patrol.