This cannon was taken from HMS Confiance after the Battle of Plattsburg in 1814. (US Naval Academy/Released)
October 13, 2020 Heather Mongilio - The Frederick News-Post
Share
Tweet
Flip

There were no public celebrations, just another example of how the coronavirus has changed the academy’s 175th year.

The academy was founded under Secretary of the Navy George Bancroft on Oct. 10, 1845 without public funding, according to the Naval Academy website. The Naval School, as it was known then, was founded on what was then-Fort Severn.

No structures remain from the original Naval School, renamed the United States Naval Academy in 1850, said museum director Cmdr. Claude Berube. At the time, Fort Severn was only 10 acres. Over the years, the institution acquired hundreds of acres to become the Naval Academy as it is seen today.

Buildings had started to fall apart by the 1880s, Berube said, but it was also a “new era for the Navy” where it decided to reinvest and have a proper naval academy.

“This was the new Navy,” Berube said. “This is when we start modernizing. This is when the United States Navy, under President Roosevelt and others, really build a first-class Navy that becomes a world power. So the Naval Academy structure at the time really reflects the nation’s and the policymakers investments in a new Navy.”

While there were no public events Saturday and the academy remains closed to visitors, Berube created a list of places and items to see, digitally for now, that are lesser known. These are the spots that people might walk by without recognizing their importance, he said.

“I think it’s important to say that there isn’t a place that isn’t important at the academy,” Berube said. “Every place[….] has a special meaning in terms of the history of the Navy, or to the Naval Academy, or to the midshipmen who have gone through there, the staff, the faculty who have worked there.”

Once the academy lets visitors back on the campus — when COVID-19 is not a concern — people can find the Confiance cannon in front of Macdonough Hall. It was aboard the HMS Confiance during the War of 1812.

Downie stood by a cannon on his ship, when it was hit by a cannonball. The force of the cannonball striking the cannon’s muzzle pushed the cannon back, crushing Downie. The cannon, now at the academy, still has a dent in it.

The Oregon gun is hidden right behind Gate One, behind the deputy commandant’s residence. People really have to look for it, Berube said.

The Oregon was one of two guns on the USS Princeton. The ship was sailed to Mount Vernon in 1844, under the command of Capt. Robert Fields Stockton, to salute the memory of President George Washington.

The secretary ordered the gun to be fired, and when it was, it exploded, killing the secretary of the Navy, the secretary of state and several other passengers. Tyler was not killed because he was delayed below deck by someone asking a question.

“So he was saved really by serendipity,” Berube said.

Gate 3 and the gatehouse are some of the oldest structures at the Naval Academy.

But movie buffs probably know Gate 3 better from “Patriot Games” with Harrison Ford. The gate is the scene where Ford’s Jack Ryan is attacked.

Ford came to the academy to prepare for the role, in which he plays a history professor. A picture of Ford as Ryan still hangs in the history department, Berube said.

As with most Hollywood movies, “Patriot Games” got a couple things wrong, including that Ryan walks out of Bancroft Hall, which is the dormitory building, and not one where classes are held.

The cemetery is the Naval Academy’s hallowed grounds. It is known for famous and non-famous Naval officers.

One of those is Cmdr. William Cushing, who was kicked out of the Naval Academy before the Civil War. He was reinstated after pleading his case and went on to lead small campaigns before ultimately being put in charge of the mission against the CSS Albemarle.

He led a successful offense to sink the ship, which was considered to be a suicide mission.

There is also the Jeannette expedition, a largely fatal attempt to explore the North Pole. The USS Jeannette was trapped by ice, and the memorial to the men who died also looks like it is frozen in ice.

“I think the cemetery is so important because it represents the beginning and the end of the lives of midshipmen and their continued legacy,” Berube said.

The Naval Academy is responsible for 600 flags from several military events, such as the War of 1812 and the Spanish-American War. 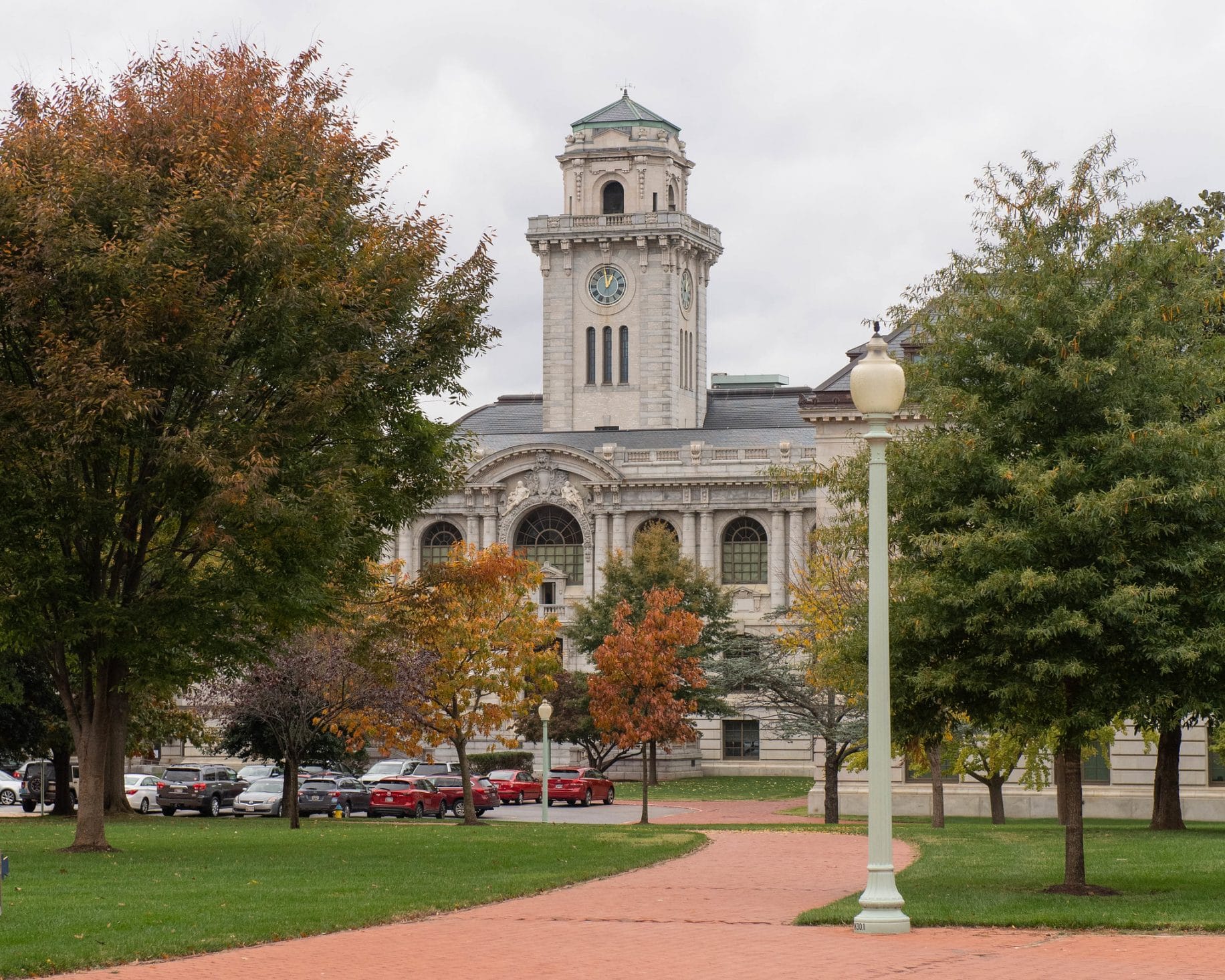 President James Polk ordered the flags to be sent to the Naval School in 1849. They were brought to the academy where they were preserved by Amelia Fowler and 40 other seamstresses.

However, three years ago, the Naval Academy removed many of the flags for preservation, but some still fly, including the “Don’t Give Up the Ship” flag, which hangs on the first deck of the museum.

The Tripoli Monument is one of the oldest war memorials in the United States, although it is not the memorial that has been at the academy the longest. It can be found behind Preble Hall. 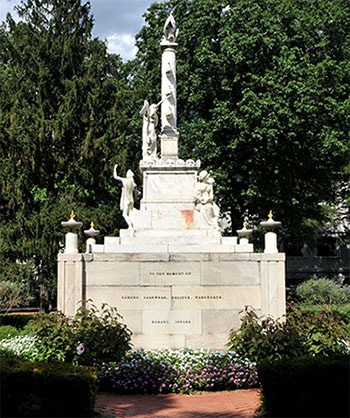 The Barbary Wars were the first real test abroad for the new United States Navy, and as we have discussed before, it was where many of our early naval heroes cut their teeth and learned their craft. Today’s object remembers those early navy heroes who died at Tripoli to protect Americans. One of the earliest military memorials in the U.S., it has stood as a tribute to their sacrifice for over 200 years.
(US Naval Academy/Released)

“But I think people tend to miss that because it’s between a couple of buildings, so it’s not necessarily on one of the tours,” Berube said.

It was taken by the USS Constitution, the sister ship to the USS Constellation — which is in the Baltimore Harbor — to the Navy Yard, where it remained for a couple decades. Then it went to the Capitol.

The academy is currently in the process of restoring the monument. Its marble has greyed as a result of contaminants in the air.

The memorial plaques can be found in the nave of the chapel at the academy. They honor midshipmen, ensigns and sailors who have died. 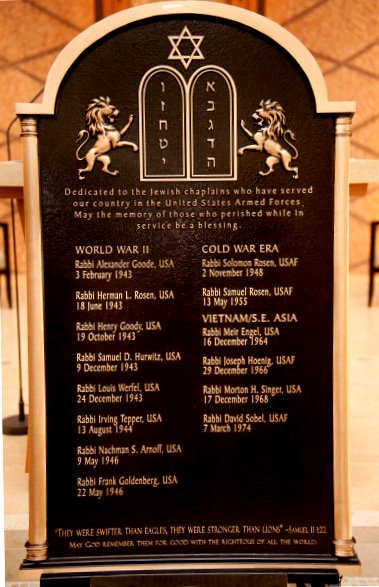 The Congressionally authorized Jewish Chaplain’s Memorial, presented publicly and on display at the Levy Chapel of the U.S. Naval Academy in Annapolis.
(Jrryjude/WikiCommons)

Among the plaques is one dedicated to the first sailor to die in the second World War.

Going up the stairwell, there are plaques dedicated to faculty members.

“These are the far younger individuals who serve their country and sacrificed for it,” Berube said. “And I think it’s important to recognize them by at least checking their flags out, and what I’m doing right now with my students in my naval history class, they’re writing articles about the losses of some of these individuals. So they’re going back into original records to really recreate the story so that we can better those stories.”

The Mahan Clock Tower is not publicly accessible, even when the academy is open to the public. 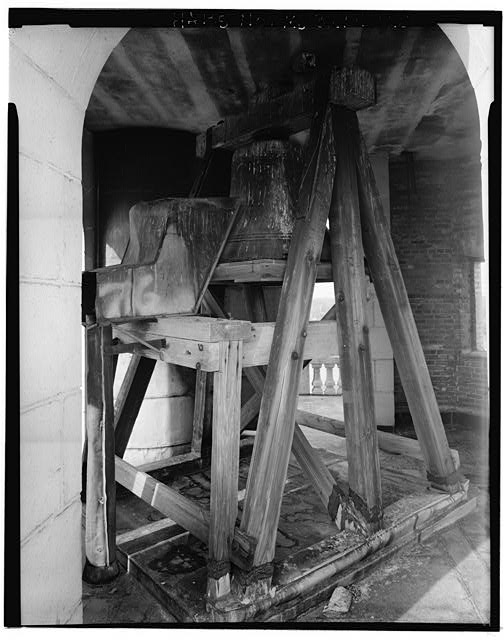 It has an amazing view of the Naval Academy, Berube said. There are some times when midshipmen are able to get up to the top.

Berube suggests they take advantage of the views when they can.

The Mexican-American War Memorial is the memorial that has been at the academy the longest amount of time. It is located between Mahan and Bancroft halls. 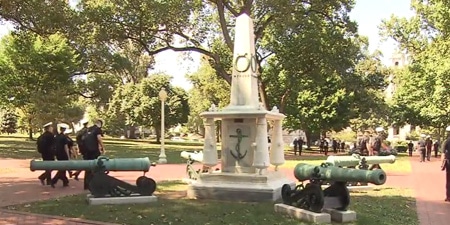 Dedicated to the memory of four fallen midshipmen, the Mexican War Monument is the longest-standing monument on Naval Academy grounds. None of these midshipmen actually set foot on the then-new Annapolis campus, but their bravery and sacrifice was integral to saving the fledgling Naval Academy. (US Naval Academy/Released)

It recognizes four midshipmen who died in the conflict. Two were already in the fleet, two were going to attend the academy before their deaths.

The money for the memorial was raised by midshipmen.

For those looking for more history, the museum releases podcast Preble Hall. There will be episodes about the academy’s anniversary.

When visitors can return to the academy, Berube suggests history buffs check out the Naval Academy Museum. There is a 175th anniversary exhibit that will take up two decks. It will focus on academy life.