The Camden County Police Department and several federal law enforcement partners used high-tech tools in their investigation of the gunfire into the home of two sleeping police officers in the city last month.

They netted four suspects using surveillance video, spent shell casings and a new practice called geofencing, where police ask tech companies for information on any cell phones near a crime scene and then work backward to determine possible suspects or build a case against someone.

Julio Nieves, 19, Jeremiah McDonald, 18, Jaqwa Styles, 19, all of Pennsauken, and Kobbie Johnson, 30, of Collingswood, are all charged with attempted murder, conspiracy to commit murder and weapons charges, Wysocki said. 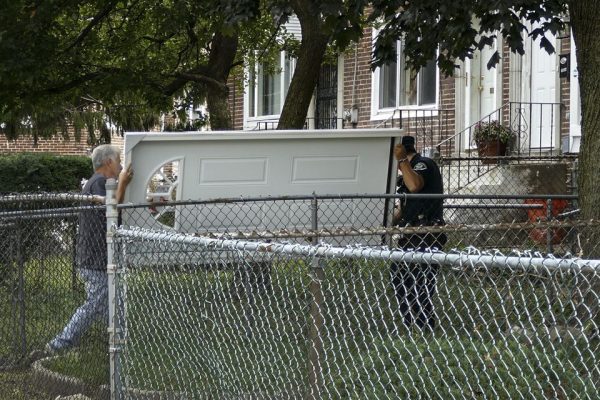 A Camden County police officer helps a contractor carry a new door at the home of two married county police officers which was hit with gunfire in this Friday, September 18, 2020 photo,
(Michael Mancuso | NJ Advance Media for NJ.com/TNS)

At a press conference Monday, Camden County Police Chief Joseph Wysocki said police believe the four men targeted the house by mistake, thinking that someone else lived there. In fact, officers Jaihna Ibanez and Randy Cintron were asleep in the Clinton Street rowhome with their 10-day-old baby when the shots rang out Sept. 15, according to court records.

Wysocki has declined to give a motive for the shooting, and the probable cause statements the Camden County Prosecutor’s Office filed with the court do not reveal a motive or why police believe the officers were not the intended targets.

Police also did not detail in the documents about how they positively identified the people they saw in surveillance footage, only saying the IDs were supported by cell phone data and, in two cases, a witness statement. 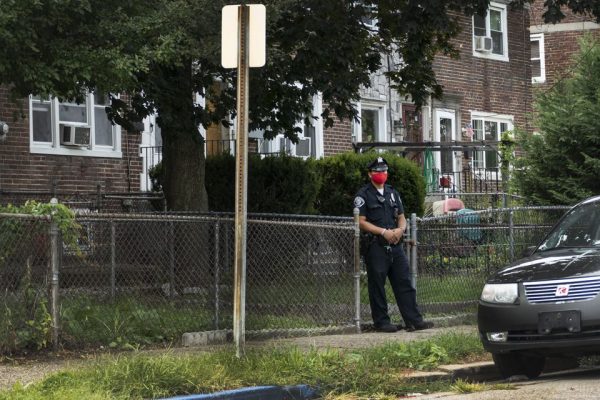 The statements said surveillance video showed a dark minivan, later determined to be a 1998 Honda Odyssey, drop off two males at 30th and Royden streets, about two blocks from the shooting site. After the shooting, in which five bullets hit the home and two penetrated into the first floor living room, neighbors saw the vehicle flee, police wrote.

Nearby surveillance cameras captured the van leaving the area with its lights off, the statement said.

Police officials had acknowledged after the shooting they had recovered the vehicle they believed was involved, but they did not say that they had actually stopped it with one of the suspects driving just two days after the shooting.

The probable cause statement reveals that Johnson was stopped while driving the van in the city Sept. 17. He spoke with police and “provided a statement to detectives placing himself in the area of the incident” but then requested an attorney, police wrote.

Police also wrote in the document that “several other males” who were observed meeting with Johnson before the shooting were also seen on the 600 block of Clinton Street — the spot where police stopped Johnson — before and after the incident. They identified one of them as McDonald, though it’s not clear how.

Another break in the case came Sept. 27, when police frisked McDonald after stopping him for suspicious activity and allegedly found him carrying a Ruger 9-millimeter handgun that matched the shell casings they found at the cops’ shot-up home, the statement said.

McDonald gave a recorded statement to detectives after his arrest but investigators did not include any details in the probable cause statement.

As for the charges against Nieves and Styles, police said even less in court documents: “Through further investigation and review of the geofencing records along with video recordings, two additional suspects were identified as Julio Nieves and Jaqwa Styles.”

That evidence was backed up by witness statements, police wrote.

The documents do not present a clear theory about who actually fired on the home or who was driving. In supporting the charge of conspiracy to commit attempted murder, both Johnson and McDonald are accused of driving the van while Nieves and Styles are accused of “being involved” in the incident.

McDonald, Nieves and Styles are being held in the Camden County jail and are scheduled for detention hearings Thursday. Authorities are in the process of extraditing Johnson, who was arrested in Connecticut, to New Jersey.

It’s not clear if any of them have attorneys.