Thirty-seven years ago today, 241 U.S. military members were killed in a terror attack in Beirut, Lebanon in one of the deadliest days in U.S. military history.

Hezbollah terrorists backed by the Iranian government drove a truck packed with explosives into a military barracks on Oct. 23, 1983. The terrorists crashed the truck into the barracks, killing a total of 307 military personnel who were deployed to the region for a peacekeeping mission. Of the 241 U.S. military members killed were 220 U.S. Marines, 18 U.S. Navy sailors, and three U.S. Army soldiers. Sixty other French military personnel were also killed.

On Friday, the Marines tweeted, “They Came In Peace. Today, we reflect on the words of President Ronald Reagan as we remember the 220 Marines, 18 @USNavy Sailors and three @USArmy Soldiers who died on this day in 1983 when terrorists attacked the Marine barracks in Beirut, Lebanon.”

They Came In Peace

Today, we reflect on the words of President Ronald Reagan as we remember the 220 Marines, 18 @USNavy Sailors and three @USArmy Soldiers who died on this day in 1983 when terrorists attacked the Marine barracks in Beirut, Lebanon. pic.twitter.com/yckzJUaZGt

The U.S. hadn’t suffered such a large loss of military personnel in a single day since Iwo Jima in World War II. 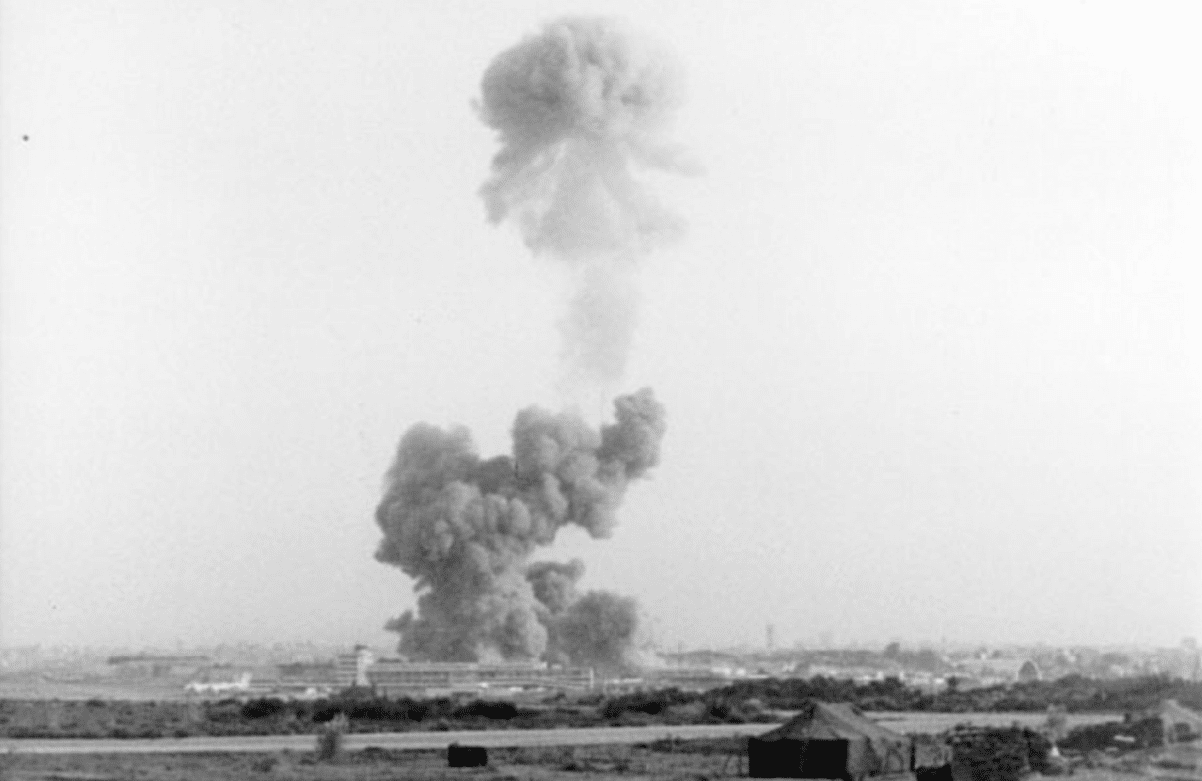 The explosion of the Marine Corps building in Beirut, Lebanon, created a large cloud of smoke that was visible from miles away. (U.S. Marine Corps photo/Released)

According to legal documents filed against Iran, ATF and FBI explosive experts estimated the Hezbollah truck was carrying the equivalent of between 15,000 and 21,000 pounds of TNT.

A memorial was erected near Camp Lejeune in Jacksonville, North Carolina at the Evergreen Cemetery, and a remembrance ceremony is held there each year. 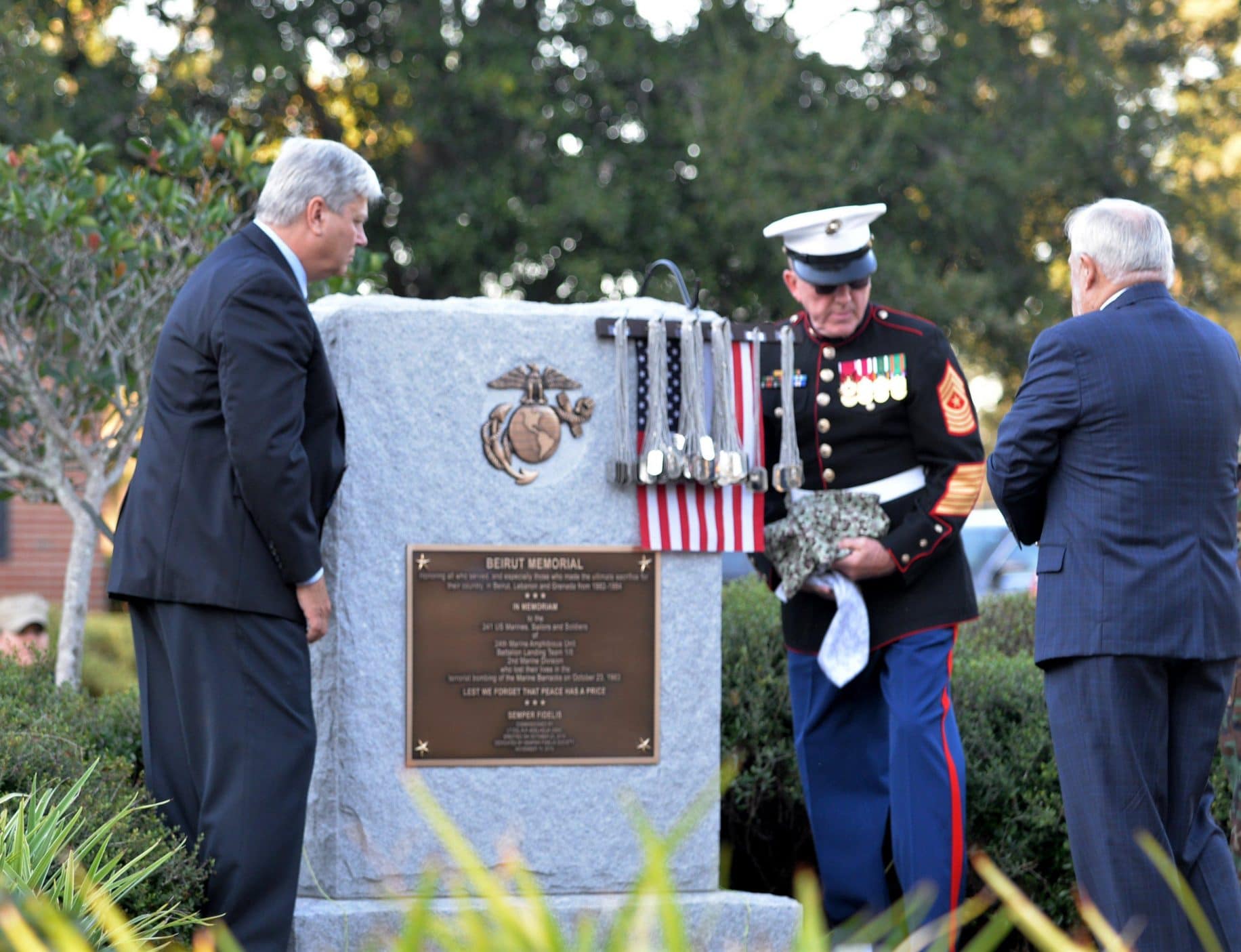 The Semper Fidelis Society unveiled the Beirut Memorial on Sunday honoring the U.S. Marines and other military service personnel killed during the 1983 suicide bombing in Lebanon. The monument stands near the Marine and Navy FMF Corpsmen Memorial at the entrance of Evergreen Cemetery in Jacksonville. (Dede Smith/For the Florida Times-Union/TNS)

A lawsuit was filed in December 2016 against the Islamic Republic of Iran and the Iranian Ministry of information and Security to hold them responsible for the deaths. The court ruled in the victims’ families’ favor, awarding a total of nearly $338 million.

37 years later, the victims’ families are still trying to collect compensation. In May, a U.S. district court judge awarded the family of Lance Cpl. Lex Trahan, a 19-year-old combat engineer who died in the blast, an award of $49,658,756.

On Friday, the U.S. State Department released a statement on the anniversary of the Beirut attack.

On October 23, 1983, Hizballah carried out a suicide bombing targeting the United States Marine Barracks in Beirut, claiming the lives of 241 American service members who had been sent on a peacekeeping mission.  The service members who lost their lives that day were true heroes, far from home in a troubled land, seeking to protect the innocent.  As inscribed on the U.S. Embassy Beirut Memorial and the Beirut Memorial at Marine Corps Base Camp Lejeune in North Carolina, “They came in peace.”  We will never forget their sacrifice.

This attack, and the many more that followed around the world, make clear Hizballah’s commitment to violence and bloodshed and demonstrate its continuing disregard for the lives of the very people that it claims to protect.  These terrorist acts have unmasked Iran, Hizballah’s patron, as a rogue state willing to pursue its malevolent interests at all costs.

On this solemn day, we honor the sacrifice of those brave Americans, and we renew our commitment to preventing Hizballah and its sponsor Iran from spilling more innocent blood in Lebanon or anywhere in the world.  The United States will continue to target, disrupt, and dismantle Hizballah’s financing and operational networks, and will continue to take all actions available to starve this terrorist entity of funds and support.  We are grateful for the nations around the world that have designated or acted to ban the activities of Hizballah as a terrorist organization.

Working together, we can ensure the tragedy that befell our brave Marines, Sailors, and Soldiers 37 years ago will never happen again.