The Trump International Hotel & Tower in Chicago on Oct. 19, 2020, after an unidentified man had been dangling off of the 16th floor of the building for more than 13 hours. (Jose M. Osorio/Chicago Tribune/TNS)
October 19, 2020 Paige Fry - Chicago Tribune and Katherine Rosenberg-Douglas - Chicago Tribune
Share
Tweet
Flip

Chicago police said Monday morning they had “resolved peacefully” a standoff at Trump Tower more than 13 hours after a man suspended himself with a rope and harness from the 16th-floor landing of the downtown high-rise. 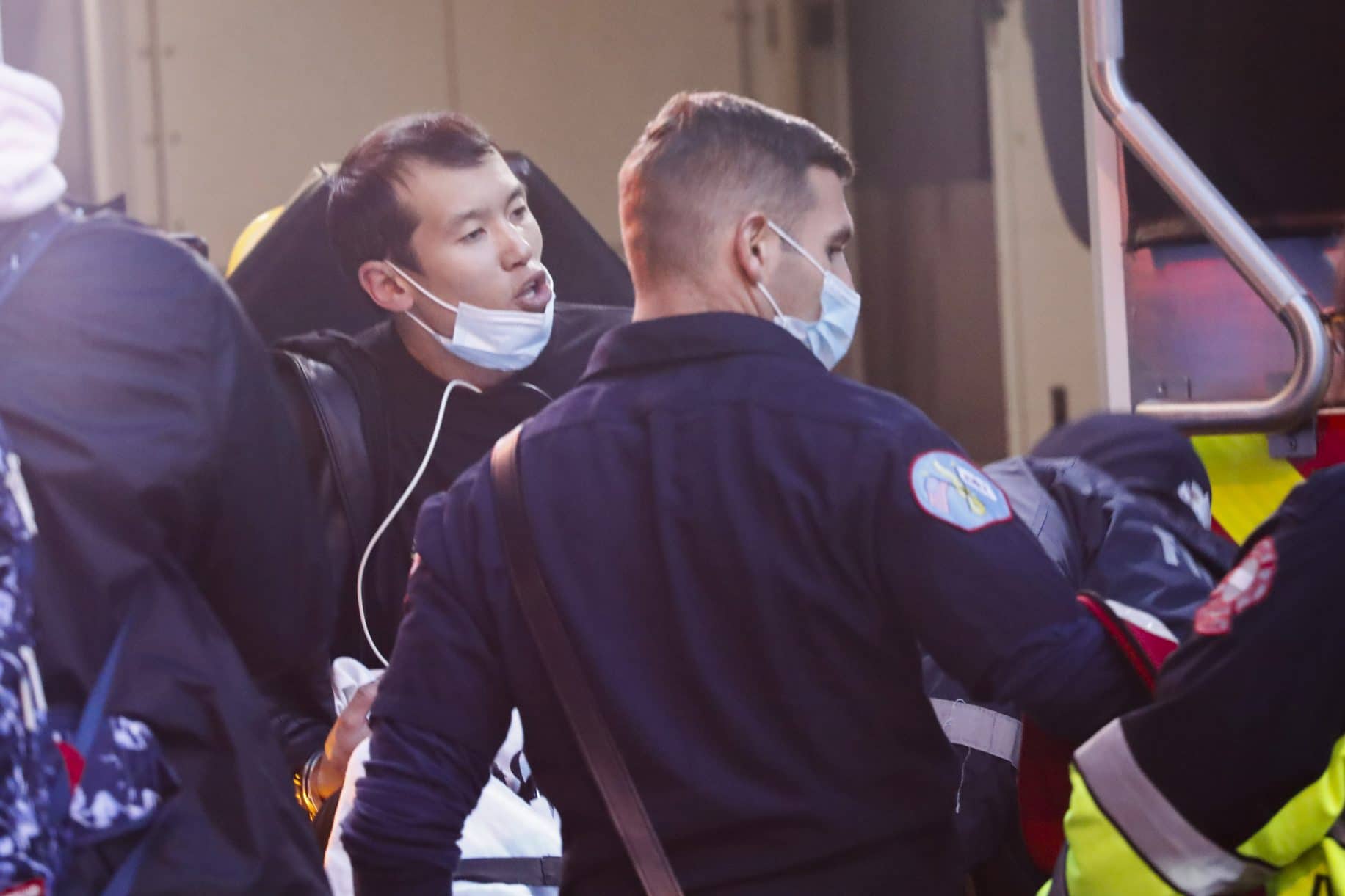 An unidentified man is loaded into a Chicago Fire Department ambulance outside Trump International Hotel & Tower on Oct. 19, 2020. The man had been dangling off of the 16th floor of the building for more than 13 hours. (Jose M. Osorio/Chicago Tribune/TNS)

A police SWAT unit and the Chicago Fire Department had responded to a call of a man threatening to kill himself at the Trump International Hotel & Tower, 401 N. Wabash Ave. in the Near North neighborhood, around 5:30 p.m. Sunday, according to police. Ahern said the man rapelled down the outside of the building; he was seen hanging by a rope several feet below the ledge to the right of the large “Trump” sign on the building.

Police negotiators talked to the man from a balcony on the building, their voices reaching the man not far from the ledge, Ahern said. The man did not live in the building and it was unclear how he got inside the building and that remains under investigation, he said.

Cmdr. Patty Casey, who heads the youth investigations unit, said a Russian interpreter was called to the building and employees at the building also aided in the peaceful outcome. In a media briefing after the conclusion of the call, she hailed crisis negotiators, including Detective Hector Matias, who was on scene nearly 14 hours after spending some 17 hours at a different call over the weekend.

Sally Bown, a police spokeswoman, said she didn’t have enough information to provide information on the 17-hour standoff.

“They were patient and kind and spent hours dealing with this distraught man who was in an apparent crisis, saying he had many social issues that he wanted to discuss with reporters,” Casey said. She and Ahern did not immediately explain what the “social issues” were.

“It was really a team effort. What could’ve been a tragedy ended up as a situation that was resolved without incident. Today, the Chicago Police Department and their partners literally saved this young man’s life,” she said.

Matias said it’s not uncommon for outsiders to question why these kinds of calls can take so long to resolve peacefully.

“It was something that we train for. It’s something that we’re very used to. It’s very challenging and sometimes when someone is looking at it from the outside they think, ‘wow, why does it take so long?'” Matias said. “There’s different tactics in our toolbox that we utilize and I think today we probably utilized every single one.”

Matias said while the man was hanging from the building with the harness, he threatened to use the knife to cut the rope if police tried pulling him up. Eventually, he surrendered the knife and was pulled to safety.

A video circulating on social media that appeared to be of the man showed him holding onto a red rope with one hand and a knife in the other. Part of the Chicago skyline could be seen in the background during daylight. In the video, he demanded to talk to President Donald Trump or the media. If not, he said, he would cut the rope.

Chicago police could not immediately confirm if the video was of the man who Monday morning was rolled out of the building on a gurney to which he was handcuffed.

Casey said the man would be taken to an area hospital where he would receive a mental health evaluation. Ahern said he expected charges to be filed against the man following the outcome of that evaluation.

Around 11 p.m. Sunday, several motorists pulled over on Michigan Avenue with their hazard lights on to walk onto Wacker Driver, which was blocked off by police, to look up at the man.

Social media users made posts wondering how the man was able to stay suspended for so long given the temperature in the 40s.

Matias said the man made several demands, some of which police were able to accommodate. Although Matias did not say what they were, he confirmed the man had asked to speak directly with members of the media.

“We agreed on a couple of concessions that we could agree to that were safe,” he said, but that did not include allowing the man to speak with reporters.

Asked whether police entertained the idea of somehow arranging for the man to speak with the president, Matias shook his head “no.”

It wasn’t immediately clear whether Trump was aware of the situation at the property bearing his name, or whether he received word the man hanging from it wanted to speak to him. As of 9:45 a.m. Trump had not mentioned the situation on Twitter.

The building also made news during the weekend as the United Steelworkers union projected a light display on the tower with a “Biden/ Harris” logo as part of its national campaign to encourage people to vote, a representative of the union said.