Rugged Jeeps and pickups can explore the great outdoors. But for those who want vehicles to travel further into unnavigable terrain, Hyundai is working on what it calls a “Transformer-class vehicle” right out of a science-fiction film.

The Korean automaker has formed an Ultimate Mobility Vehicles Studio in Silicon Valley to develop its so-called “walking car,” It’s based on the Elevate concept vehicle that wowed visitors to the 2019 CES technology show in Las Vegas. 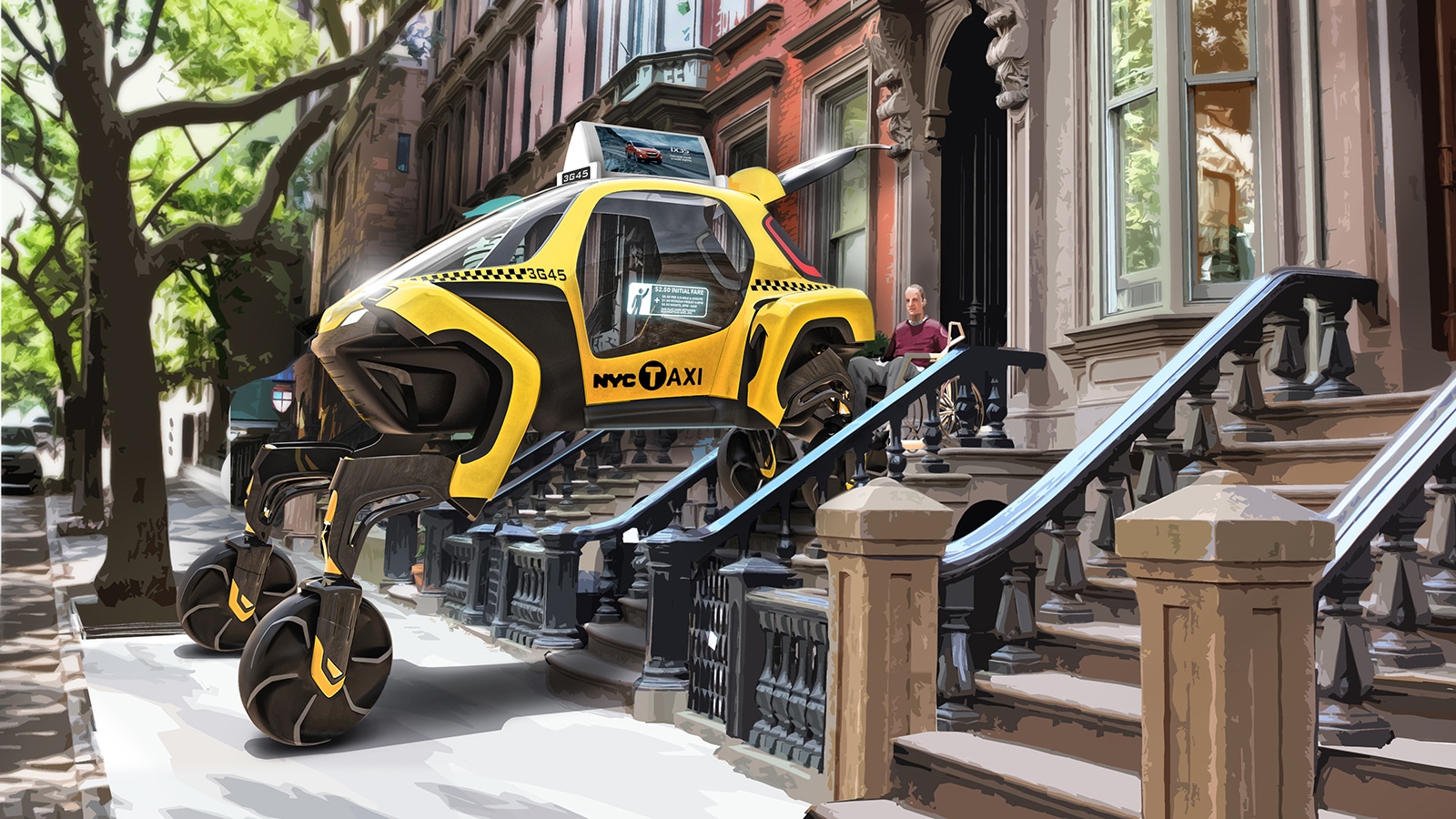 An artist’s rendition of the walking car concept as a taxi for the disabled. (Hyundai/TNS)

Envisioned initially as a vehicle to assist first-responders to reach remote disaster zones, the walking car will also be explored by Hyundai’s team for its potential in consumer and industrial uses.

In addition to rescue duty for earthquakes and other natural disasters, the Elevate vehicle could be used to satisfying individual wanderlust and help transport the disabled by, for example, walking up to their front door, leveling itself, and rolling in wheelchairs.

The Elevate looks like a giant robotic dog featuring leg joints for articulation over extreme terrain. Wheel are attached to the feet so it can roll as well.

The design, says Hyundai, allows the machine to walk with mammalian or reptilian gaits, while also allowing it to move in any direction.

The walking car can traverse uneven terrain, climb a 5-foot wall, step over a 5-foot gap, and spread its legs to a 15-foot wide track width – all while keeping its main cabin (and passengers) level. A combination of wheels and articulated legs enables faster walking speeds.

When not in the field, the ultimate mobility vehicle can drive on-road by folding its legs into stowed-drive mode. The battery-powered Elevate cuts power to the joints to allow travel at highway speeds like any other vehicle.

The Hyundai team not only shows off the Korean firm’s expansive view of the mobility future (it is also researching a flying car and drones), but also demonstrates the auto industry’s integration with Silicon Valley and Detroit at a time of intense technological change.

The New Horizons Studio is led by Hyundai Vice President John Suh, a 35-year veteran of investment in automotive and emerging tech, including positions at General Motors, Stanford University and the Palo Alto Research Center. He is a founding director of Hyundai Cradle, a California venture firm that invests in pioneering mobility projects.

The concept was designed in Metro Detroit by Walled Lake-based Sundberg-Ferar, a leader in transportation design. Sundberg-Ferar is no strange to Silicon Valley, having designed the region’s BART system trains.

“By combining the power of robotics with Hyundai’s latest EV technology, Elevate has the ability to redefine our perception of vehicular freedom,” said Sundberg-Ferar design chief David Byron. “Imagine a car stranded in a snow ditch just 10 feet off the highway being able to walk or climb over the treacherous terrain, back to the road potentially saving its injured passengers – this is the future of vehicular mobility.”

Hyundai isn’t the only auto manufacturer working on so-called “white-space development” beyond traditional cars. Toyota is developing a hydrogen-powered lunar rover and Honda has developed an innovative business jet airplane. Multiple companies are investing heavily in the future of autonomous vehicles.

“This is in the Hyundai culture. It is a manufacturing company that is always looking at building engineering solutions,” said Hyundai spokesman Miles Johnson. “It’s an ecosystem where we’re looking at everything from robotics to scooters.”