‘A part of me died when he died’: Families recall loved ones killed on USS Cole

“I’d just married, and he told my husband to take care of me. Then he looked at me and said: ‘He’s a keeper, mom,’” she says.

It’s harder to remember when he came home.

“We buried him three times,” she says. The first time was two weeks after the terrorist attack on USS Cole, which killed her son and 16 shipmates 20 years ago. 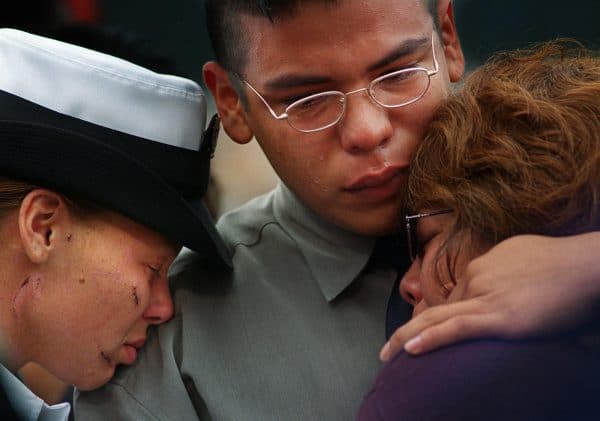 A few weeks later, the Navy gave her Timothy Lee Gauna’s ashes. She gave them to Pastor Russ Mills, who had know her and Tim all of Tim’s life, and who just a few weeks ago, promised to travel with her to Norfolk for a memorial service on the 20th anniversary of the attack. He died of COVID-19 before he could.

Still later, she got word that additional remains had been found, and were buried at sea, in the ancient naval tradition.

She’s crying as she says she hasn’t shared that story much.

Every Valentine’s Day from 2001 on, Mona Gunn and her late husband Lou, a Navy veteran, would make the long drive up to Arlington Cemetery from Virginia Beach, to lay a heart-shaped wreath on the grave of their second-oldest son, Cherone. He was just 21 when he died in the attack on USS Cole.

Valentine’s Day was his birthday. His family and friends often felt that birthday had blessed him with a particularly happy, loving personality.

Shortly after he finished at Great Lakes in March, 2000, and before joining the crew of the Cole, he had spent most of that July visiting aunts and uncles and school friends from his days at Kempsville High School.

There were lots of visits.

“He said: ‘This is my first deployment, Mom, you’re going to miss me and I’ll miss you, but I’ll be back,” Mona Gunn remembers.

The Cole was also Tim Gauna’s first ship. Just before posting there that summer, he had a few days leave and spent it back home, in Ennis, Tex.

“I think he had a feeling something was going to happen,” she says. “He told me, maybe if I break a leg, I won’t have to go. I said: ‘think of it like a vacation you couldn’t afford, the memories you’ll come back with.”

Like many young Americans, Tim joined the Navy in hopes of finding a path to college. His goal was to go to the University of Texas and study computer science, maybe play some baseball — he was a star first baseman and left-handed hitter in his high school days.

“I was a single mom, he knew we couldn’t afford that,” Sarah says. “He knew I had to work, he always understood — I had to miss some of his games …”

“He was so responsible … he’d help look after his younger brothers and sisters,” she says. “He was a real ‘yes, ma’am, no ma’am, yes sir, no sir’ kind of kid. That’s the way I brought him up.”

When he called his mom, the weekend before the attack, he commiserated about the the Longhorns’ stunning loss to arch-rivals Oklahoma — the score was 63-14 — and joked that he would need to throw away the tape because the Cole was full of OU fans who were sure to give him a hard time.

He said he couldn’t tell her where the Cole was headed but said she’d know if she watched the news, and griped a bit about a schedule change that had him eating lunch at 2 p.m.

The newness of a first deployment

Cherone Gunn’s calls home were filled with questions about the strange new world of a Navy ship on a deployment and lots of answers and good advice from his dad, remembering his own first cruise.

Cherone didn’t seem worried about the dangerous waters the Cole was headed into.

On his last call home, he told his mom he’d just finished with mess cranking — the chore all new sailors when newly assigned to a ship take on, helping the ship’s cooks serve and clean up.

He would die in the Cole’s galley. That’s where bomb-laden boat that attacked the Cole struck the destroyer.

But from what his shipmates later told his mother, Cherone didn’t need to be there.

He was done with cranking. But when he was on that never-popular duty, his shipmates remembered his cheerful spirit and efficient help — perhaps a legacy of his days as a junior at Kempsville High, in the hospitality-catering cooperative education program and happy days working afternoons at a nearby Holiday Inn. He had loved the part of his job at the hotel driving the airport shuttle, ferrying flight crews and pilots to and from the airport, and it had won him much good will and many smiles.

On the Cole, too, the cooks liked him a lot.

“They’d tell him, ‘C’mon back here, have some food with us,” Mona Gunn said. “I think that’s where he was that day.”

On that dreadful Tuesday morning, with reports that the boat-bomb that hit Cole struck it next to the galley, remembering that mild complaint about a late lunch schedule would give Sarah a reed of hope through six agonizing days.

It wasn’t until October 18 that that hope vanished. That’s when his shipmates found Tim.

Still later, a shipmate — the Cole’s crew were a close-knit group and stay in touch — told her Tim had just gotten up from the galley table to fetch some pineapple for himself and a friend when the bomb went off.

“I keep thinking, if only he hadn’t got up, he might be alive,” she says.

“And then I think he wasn’t only my child. He was God’s.”

A new goal, a continuing commitment

It was in those last few months before enlisting, during Cherone Gunn’s adventure of trying out a new city — Atlanta — far from the familiar neighborhoods of home, that a new life goal took shape.

He was staying with his mom’s youngest brother, enjoying being hero-worshiped by a five year old cousin, still not certain if one of the many colleges in Atlanta was for him, when he picked up work as a security guard.

It really seemed to click, his mom says. Cherone decided he wanted to be a police officer, maybe a state trooper.

And he knew that military service could be a leg up. The Navy was a natural for the son of a 21-year Navy veteran. His dad urged him to try.

He went off to boot camp in January, 2000. His parents were there in a still-chilly Illinois March to see him graduate; he spent the next few months at Great Lakes, studying to be a signalman.

“He was excited when he got the Cole. He was coming back home,” his mom recalls.

Mona Gunn says she’s luckier than some of the moms and dads and spouses of the victims. Cherone was among the first four fatalities identified, and she was spared the days of waiting others faced.

But his death left a hole in her heart. It took years before she came to understand that other Gold Star mothers might share that pain — and that she, too, could help others who lost their children by joining the 92-year-old American Gold Star Mothers association. She organized the non-profit’s Hampton Roads chapter and this summer finished a term as the national group’s president — the first African American to serve.

“I think the most important thing we want is that people don’t forget,” she says.

One who hasn’t is the little five year old who 20 years ago looked up to his big cousin Cherone.

“Christian enlisted in the Navy in 2016; he said he wanted to honor Cherone and he wanted to finish the service Cherone had started and wasn’t able to finish,” Mona Gunn says.

“He’s just re-enlisted, too,” she adds. “And in his first hitch, he already made (Petty Officer) 2nd class.”