Lt. Charles Dever holds the folded United States Flag Sep. 20, 2020 at Mariposa at Ellwood Shores assisted living while supported by his family. The flag is significant to Devers, as he reflected in the 98th Bomb Group alumni newsletter, The Pyramidiers, “The American flag flew over the building was such a great sight to see, especially since we were so far from home.” (U.S. Air Force Photo by Tech. Sgt. Patrick Harrower)
September 26, 2020 2nd Lt. Katie Cashin - 30th Space Wing Public Affairs
Share
Tweet
Flip

It began with an email to Vandenberg AFB from Dever’s daughter, Kathy. When the 30th Space Wing leadership learned that local WWII veteran was turning 105 years old, they went “all-in” for the surprise.

This Sunday, for his 105th birthday, Dever was expecting to celebrate with his immediate family and a few residents. What Dever got was a surprise celebration courtesy of a Team Vandenberg effort and community recognition for his time in the U.S. Army Air Corps and his legacy as a WWII B-24 navigator. 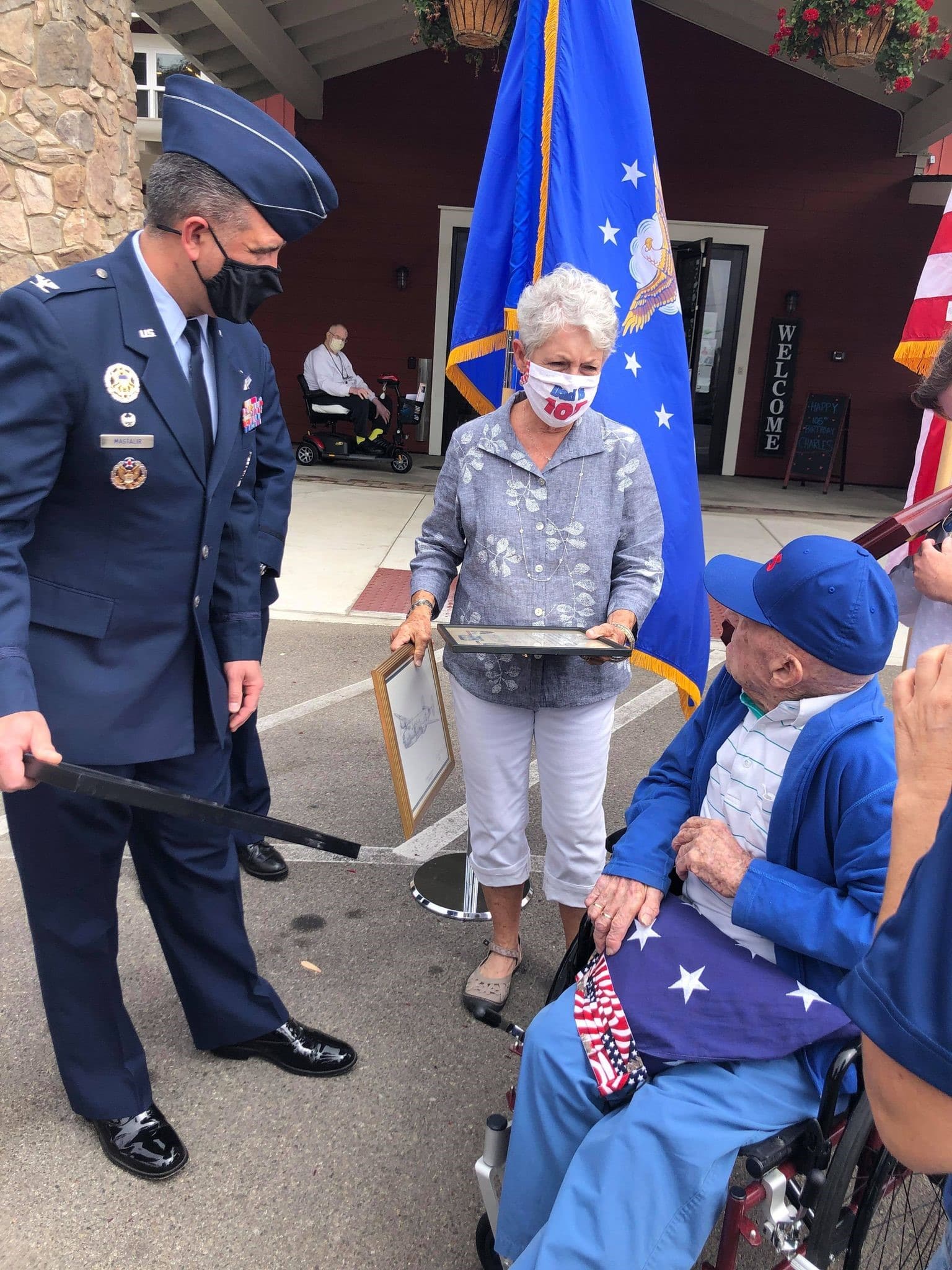 “We thought we would shoot for the moon and see where we landed,” Kathy said.

Members from across the installation wrote birthday cards, notes, and emails to recognize Dever for his time in service. More than 60 notes from various units were collected with messages coming from as far as Fort Carson, Colorado.

Team Vandenberg worked with Kathy to coordinate a COVID-conscientious grand ceremony, complete with parade, color guard presentation, speeches from leadership, and the folding of and presentation of the American flag.

After opening statements were made by Peter Bonilla, executive director of the facility, 30th Space Wing Commander, Anthony Mastalir recognized Dever. Mastalir referenced the historical context of WWII and excerpts from Dever’s memoirs as a part of what exemplified courageous service. 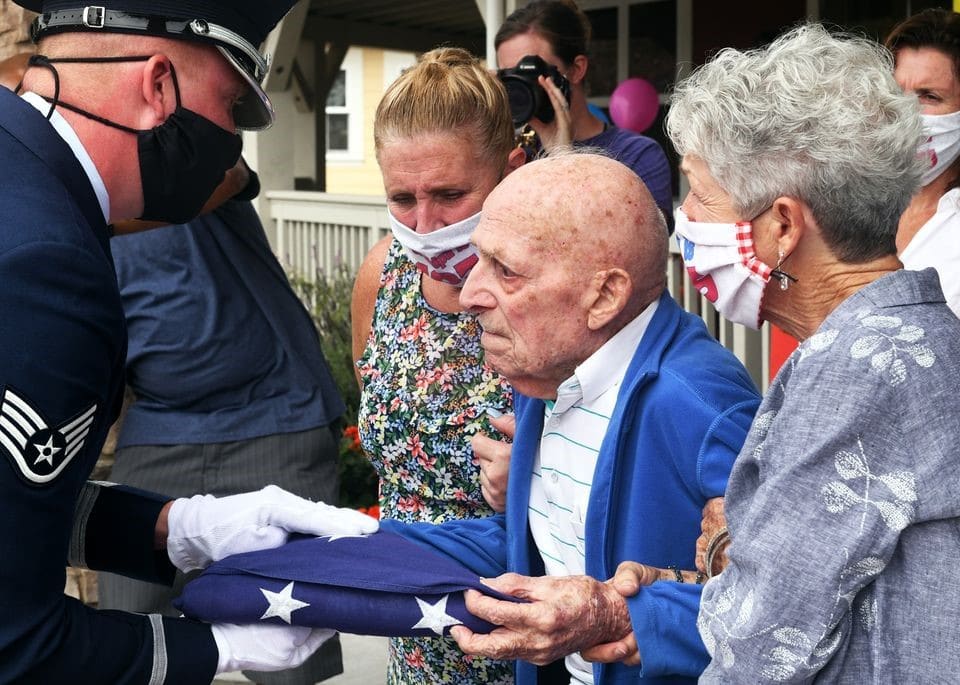 “While Charles will tell you that his years in the military were the greatest years of his life, (Devers) will be honest about the chilling feeling of sitting in the cockpit, clear nose of the plane with all of the fighting going on around him,” said Mastalir. “At 105 years old, Lt. Charles Dever is one of the few remaining individuals from the Greatest Generation. It is the legacy of warriors like Lt. Dever who have set the standard and expectation that I hope to achieve during my years in service.”

“I attended this party because it is not every day that one of our nation’s heroes turns 105,” said Ianacone. 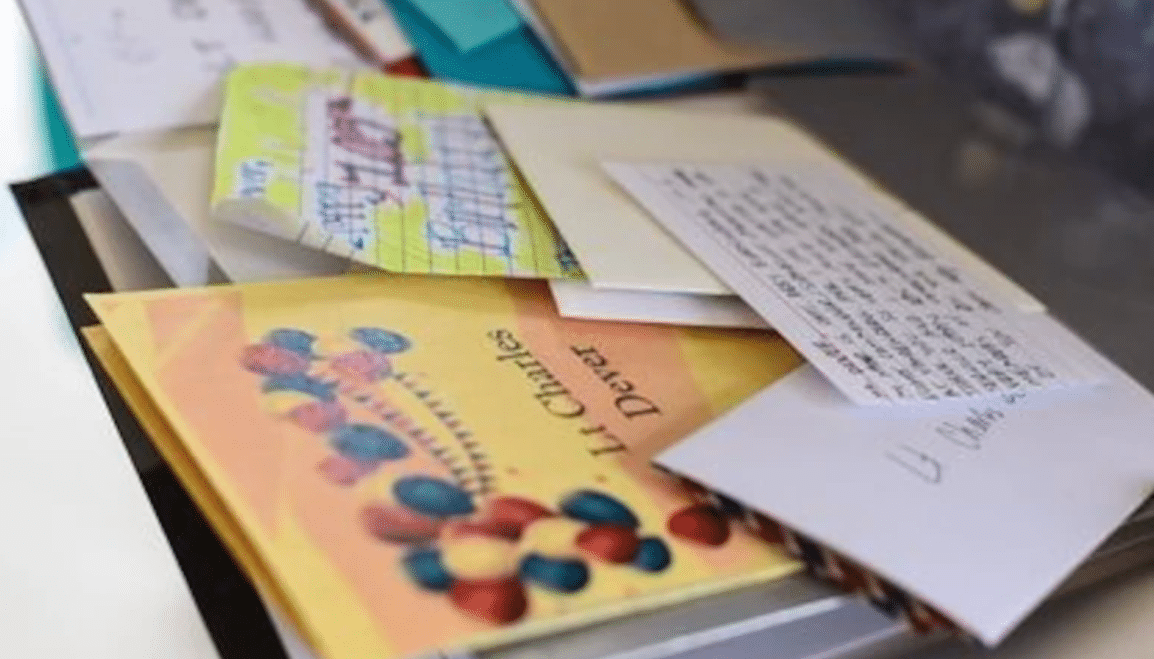 In addition to the cards, 30th Space Wing’s 2nd Range Operations Squadron signed and framed one of their heritage posters for the ‘Range Rats,’ and presented it to Dever.

The gifts kept coming in. On behalf of the installation, Mastalir presented Dever with the 30th Space Wing challenge coin and granted him honorary membership in the United States Space Force.

These presentations were followed by a proclamation from Goleta City Council Member, Kyle Richards, on behalf of the mayor of Goleta, Paula Perotte, and the grand opening of the assisted living facility’s new bocce ball court.

Charles Dever is originally from Englewood, NJ, and entered the U.S. Army on Feb. 11, 1941. Over the course of his four years in active duty, Dever served as a lead navigator in the 98th Bombardment Group, flying B-24s. Dever was a part of history during their missions to bomb shipping and harbor installations in Libya, Tunisia, Sicily, Italy, Crete, and Greece to cut enemy supply lines to Africa. His unit also targeted airdromes and rail facilities in Sicily and Italy.

Until a just over a year ago, Dever was living independently. If you ask any of his friends, they’ll tell you that he is a self-sufficient man, with a good sense of humor. He now lives in Mariposa at Ellwood Shores assisted living facility in Goleta near Kathy, his three grandchildren, Christy, Cindy, and Amy, and two great grandchildren, Alex and Chloe.