US unemployment rate drops by more than expected, to 8.4%

The U.S. labor market rebound extended for a fourth month in August, offering hope that the economy can continue to recover despite a persistent pandemic and Washington’s standoff over further government aid to jobless Americans and small businesses.

Nonfarm payrolls increased by 1.37 million, including the hiring of 238,000 temporary Census workers, according to a Labor Department report Friday. The unemployment rate fell by more than expected, by almost 2 percentage points, to 8.4%.

The dollar and yields on 10-year Treasuries climbed after the report, while the S&P 500 rose at the open before declining amid a rout in technology stocks. The median estimates in a Bloomberg survey of economists called for a 1.35 million gain in nonfarm payrolls and an unemployment rate of 9.8%. It was 3.5% in February, matching a half-century low. 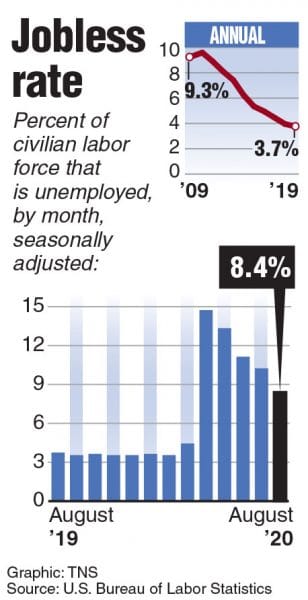 The data signal progress in the labor market is continuing though at a more moderate pace since the initial bounce-back in hiring, with payrolls remaining about 11.5 million below the pre-pandemic level. The pace of further gains likely hinges on whether America improves control of coronavirus infections, as well as an end to the stalemate in Congress over another stimulus package — something that could lose urgency after Friday’s numbers.

The drop in the unemployment rate to single digits, with two months before the November election, could give a boost to President Donald Trump, who has often polled better than Democratic opponent Joe Biden on economic issues and is counting on such sentiment to help him win a second term.

“It’s a solid report. Job growth has moderated for the last few months but it seems like the rehiring of workers is still underway,” said Ryan Sweet, head of monetary policy research at Moody’s Analytics Inc. “This was a big step in the right direction — we need to maintain this but without fiscal stimulus that will be hard to do.”

Trump tweeted after the report that the jobless rate went below 10% “faster and deeper than thought possible.”

Biden said in a speech later Friday that only wealthy people are feeling the recovery while others are still suffering. “The report reinforced the worst fears and painful truths,” Biden said.

One troubling figure from the report was that the number of permanent job losers rose by more than half a million to 3.41 million, after being little changed in July. The majority of the 10.3 million people who lost their job or completed a temporary job — about 6.16 million — continue to be on temporary layoff.

Also, news of job losses keeps coming: In recent weeks, a host of companies from American Airlines Group Inc. and United Airlines Holdings Inc. to Ford Motor Co. and Bed Bath & Beyond, have announced plans to cut workers. Lawmakers remain at odds over another comprehensive stimulus bill after the supplemental $600 in weekly unemployment benefits and small business aid expired.

The payroll figures showed broad-based gains across industries. Retail added about 249,000 jobs, more than in the prior month, while professional business services increased by 197,000 and transportation and warehousing was up about 78,000.

But the gains in leisure and hospitality businesses, such as restaurants, that had driven prior months cooled significantly in August with a rise of 174,000, compared with 621,000 in July. Also, the 29,000 rise in manufacturing jobs was less than half the median estimate of economists.

Adjusted for the misclassification of workers who should have been labeled as unemployed — a problem plaguing the data in recent months — the jobless rate would have been 0.7 percentage point higher in August, the Labor Department said.

The report also showed a strong gain in one key figure, the employment-population ratio, which jumped 1.4 percentage point to 56.5%, though that’s still well below February’s level of 61.1%.

“Obviously it’s not encouraging to have people shift from temporary to what’s considered permanent job loss,” said Michelle Meyer, head of U.S. economics at Bank of America Corp. “But if you take a step back and look at the 8.4% unemployment rate, it’s well better than what we could’ve imagined.”

The much better-than-expected improvement in the jobless rate spanned demographic groups, though White and Hispanic Americans saw larger declines in the rate compared with Asian and Black Americans. The difference between the White and Black unemployment rates widened to 5.7 percentage points from 5.4 points in July.

The gender gap narrowed, though. Among adult women, the unemployment rate fell 2.1 percentage points to 8.4%, compared with a 1.4-point drop among men, to 8%.

The report also showed average hourly earnings rose 0.4% from the prior month and were up 4.7% from a year ago, though the figure has been volatile throughout the pandemic given the scale and distribution of payroll losses and gains. The average workweek edged up to 34.6 hours.