The change of command included the handing of the division’s flag, known as the Blue Diamond, from one general to another. The short moment is steeped in Marine Corps history and represents what deploying Marines and sailors would do before battle. 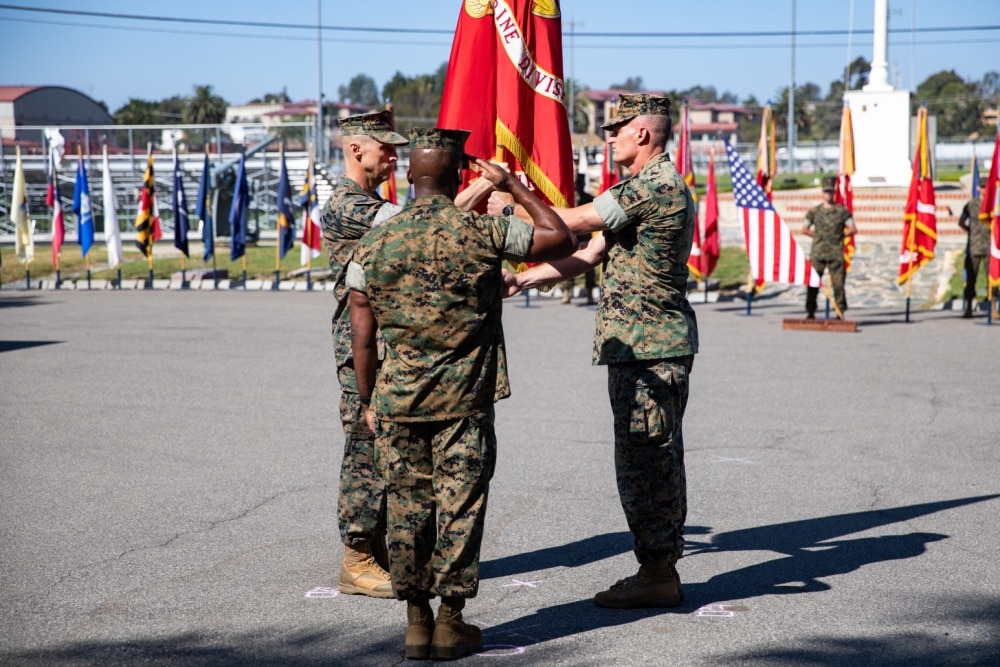 “The instant that Cas released the Blue Diamond colors and Roger took them completes the transfer of command and authority now rests in Roger,” said Lt. Gen. Karsten Heckl, commanding general of the 1st Marine Expeditionary Force. “The continuity of command, that’s what this is all about. This is about servant leaders and taking care of the command and everything in it.”

“Cas has been exceptional from readiness across the board,” Heckl said. “He raised the bar and put this division where it needs to be.”

The ultimate question a commander should ask themselves, Heckl said, is: “Are you leaving this command in a better place than you found it?

Some of the division’s highlights include conducting the largest Exercise Steel Knight in 1st Marine Division history, hosting the Japan Ground Self Defense Force for Exercise Iron Fist, supporting the Southwest Border Support Mission as requested by the Department of Homeland Security and providing security to the Navy hospital ship USNS Mercy during its COVID-19 response mission in Los Angeles. A squad from the 1st Battalion, 5th Marines also claimed the title “Most Lethal Rifle Squad.”

The division is at its most ready state, Castellvi said.

“It’s what Marines and sailors do every day,” he said. “They do it for each other and the pride of the Blue Diamond. The only thing better than being a Marine is being a Marine at the 1st Marine Division.”

Castellvi heads to the East Coast, where he will assume responsibilities as inspector general of the Marine Corps. He will serve as the eyes and ears of the Marine Corps by ensuring combat readiness and institutional integrity through independent inspections, investigations, teaching and training.

“We’re greatly honored and deeply humbled for the responsibility,” Turner said of himself and his wife in taking over the command.

“I look forward to being the ground combat element of the 1st (Marine Expeditionary Force),” he said. “We’re America’s 9-1-1 force and the 1 MEF is the Marine Corps’ hammer. Great to be part of that team.”

Turner has been based at Camp Pendleton three times before. Most recently, he served as the commanding officer of the 5th Marine Regiment from 2011 to 2013. During that time, he deployed to Afghanistan in 2011 and 2012. He has multiple awards including two Bronze Stars with combat designations.

The 1st Marine Division is the corps’ oldest and largest active-duty division and includes Marines and sailors from Camp Pendleton and Twentynine Palms.

Marines in the 1st Division have served on the beaches of Guadalcanal, in the mountains of Korea, the jungles of Vietnam and the deserts of Iraq and Afghanistan. It was activated on Feb. 1, 1941. It deploys infantry, artillery and support throughout the world.