Artist Mary Whyte spent seven years painting portraits of American veterans — one from every state in the country — but not one of them appears in military uniform.

Instead, there is a boxer, a trucker, a firefighter and many more.

“I made a list of all the kinds of people I wanted to include, from an astronaut to a homeless man,” Whyte said. “I wanted it so that every veteran who walked into the exhibit would see a veteran and say, ‘Yes, that’s me.’

“The only criteria I had was they had been honorably discharged. I wasn’t going for the high-ranking officers or those who had won medals. I wanted the average everyday man and woman who had raised their hands and offered to serve their country.” 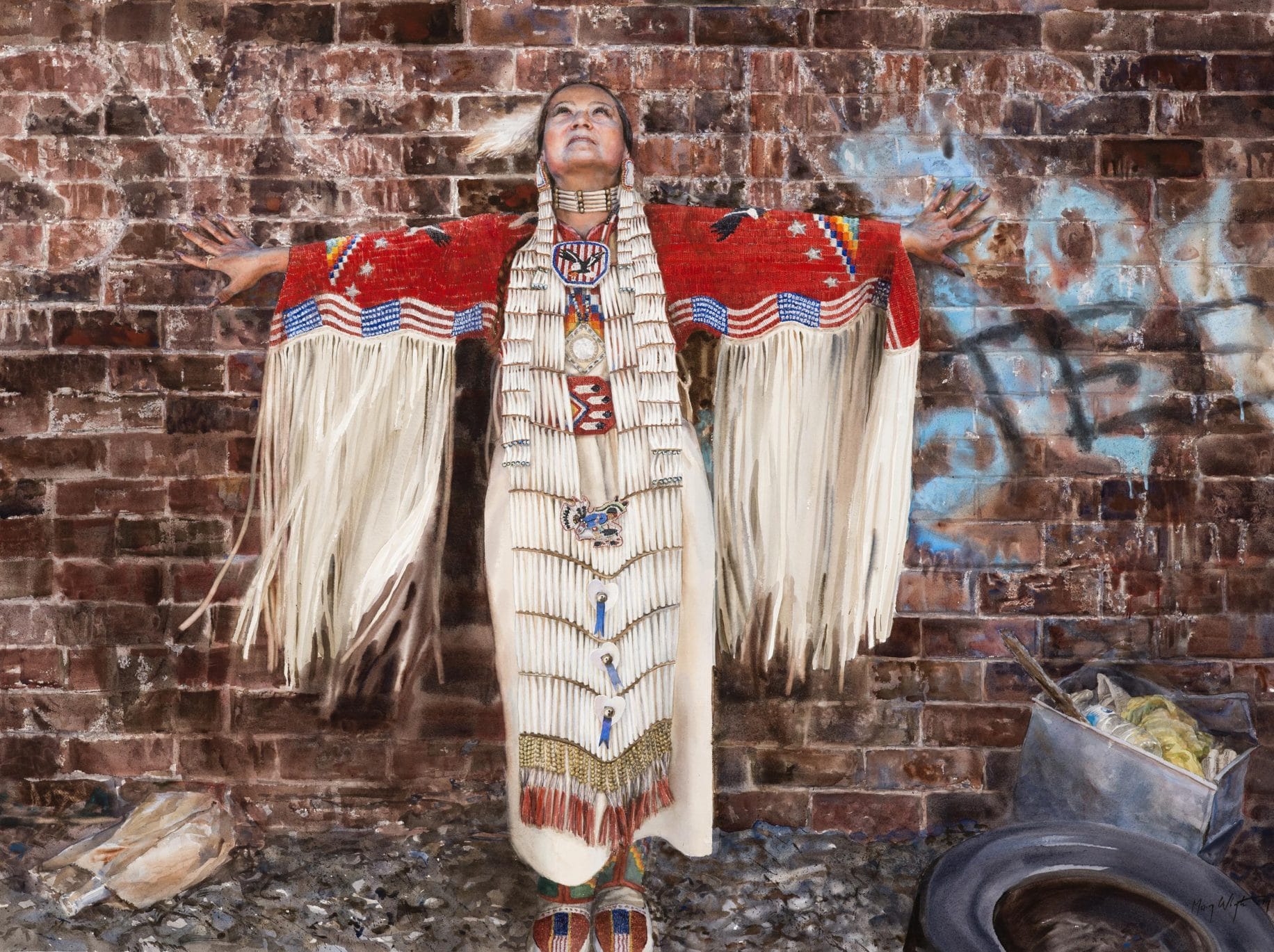 “America” by Mary Whyte shows a Native American traditional dancer in South Dakota who served in the Army.
(USA/TNS)

Whyte’s large watercolor portraits — which premiered in the fall of 2019 in Charleston, South Carolina, where the Ohio-born artist lives — will make their second appearance, appropriately, at the National Veterans Memorial and Museum. “We The People: Portraits of Veterans in America” opens Sept. 18 and continues through March 14.

“I believe that our veterans are our truest Americans,” said the 66-year-old artist. “They’re the ones willing to lay down their lives for the rest of us. … I wanted to make a portrait of America by going to all 50 states, and the one thread that would connect everything was that they were veterans, people who had served their country.”

Whyte, who was born and grew up in Chagrin Falls, studied at the Tyler School of Art and Architecture at Temple University in Philadelphia. One of her previous projects was a series of portraits of American blue-collar workers in the South. In 2010, she set out to travel the country at her own expense, seeking veterans to paint. 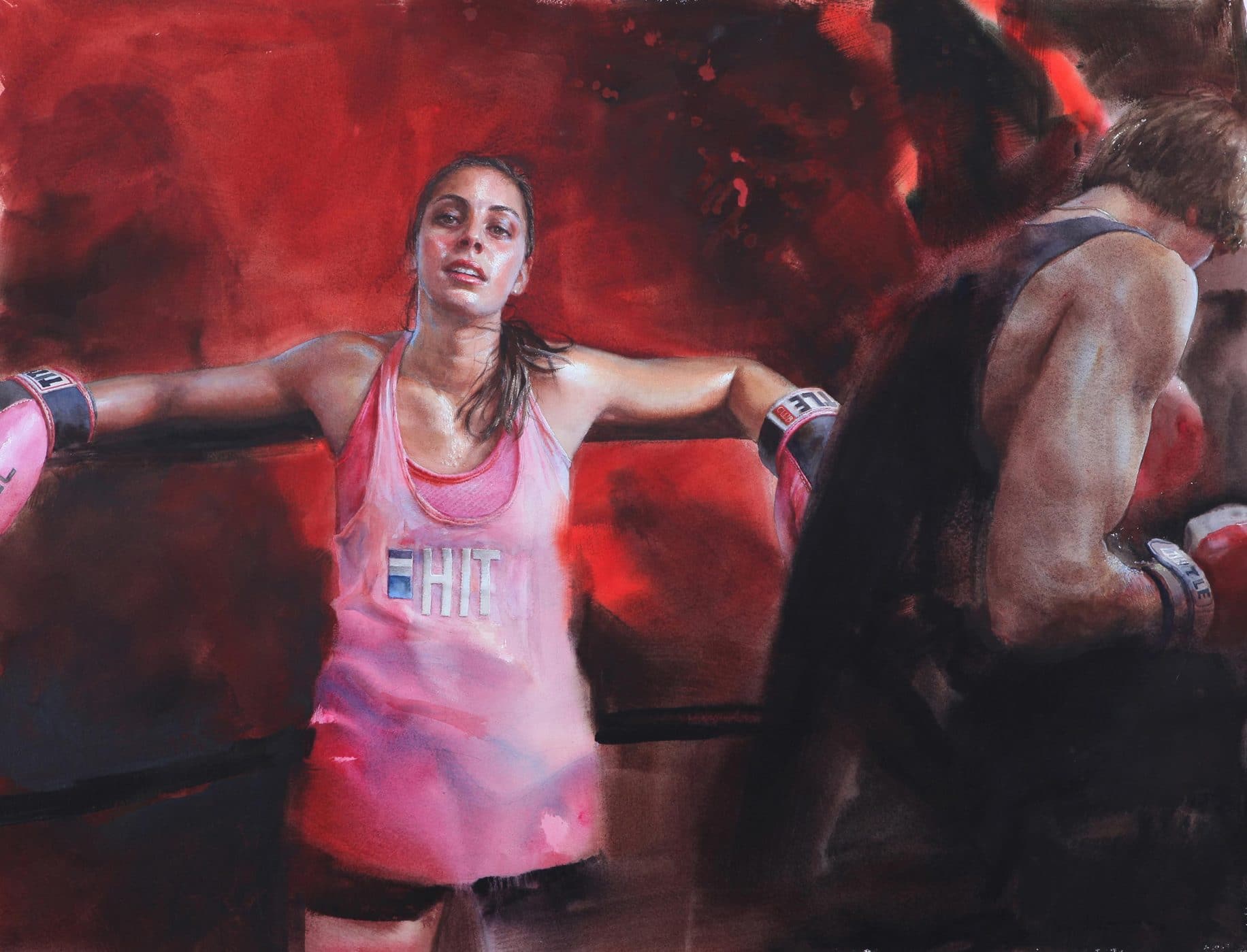 “Armistice” by Mary Whyte shows a boxing trainer in Nebraska who served in the Air Force.
(USA/TNS)

She said her best resources in finding veterans were the small-town chambers of commerce who “knew everybody in town and were proud of their vets.”

Whyte would talk to the veterans as she photographed and sketched them, then painted their portraits in her Charleston studio. In Ohio, she found veteran Sondra Eiche, 70, of Lima, a retired truck driver who served in the Marines in 1968 and 1969, spending several weeks in Vietnam.

“I wanted to include a truck driver, and it would be really great if it could be a woman,” Whyte said. “I probably called 20 trucking companies before I found her. She’s just terrific, drove this huge rig across the country in a man’s world. She’s tough, she’s strong, she’s a Marine.”

With her husband, a former Navy SEAL, Eiche attended the Charleston exhibit opening — the subject of a “CBS Sunday Morning” feature. 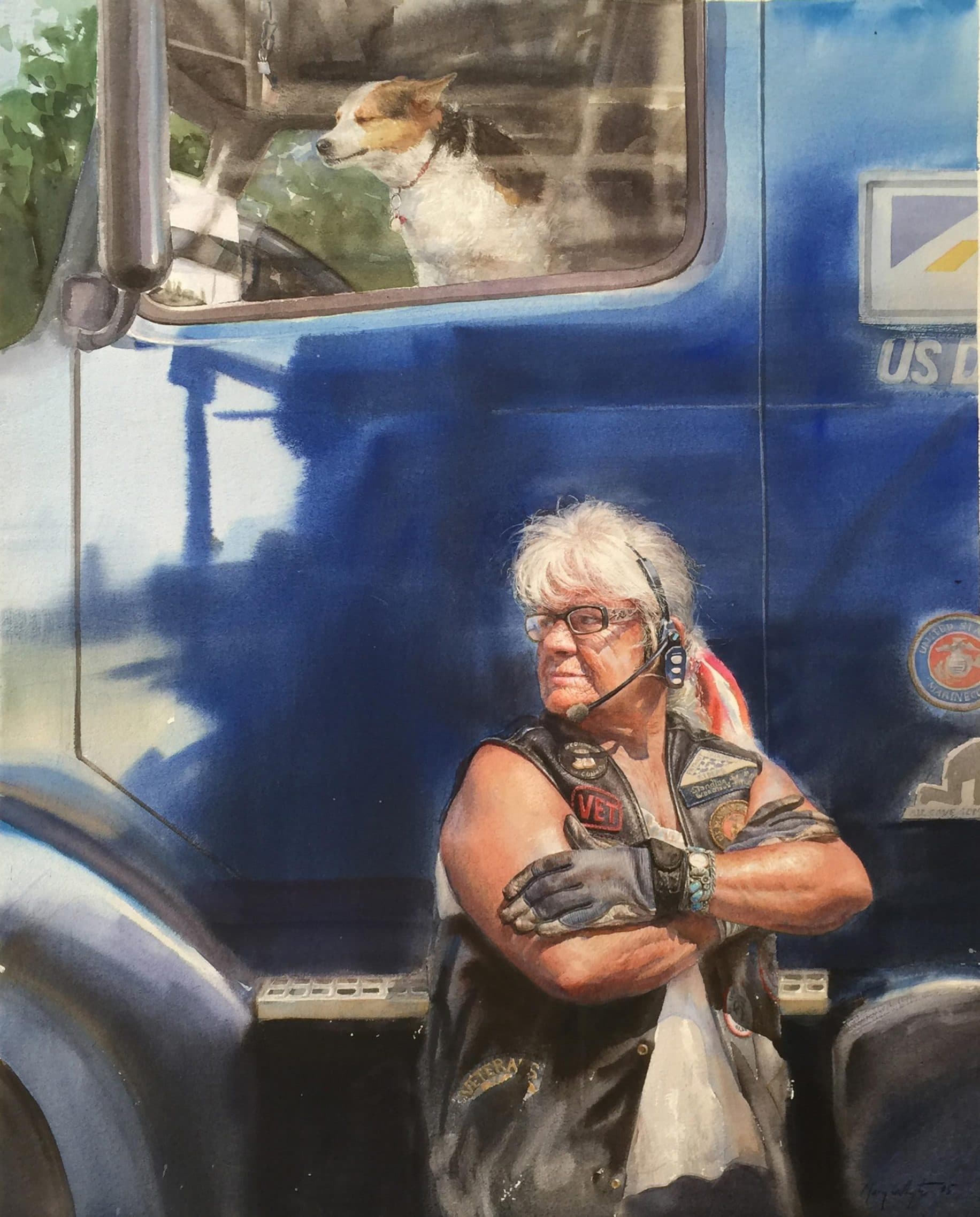 The painting “Long Haul” shows Sondra Eiche, 70, of Lima, a retired truck driver who served in the Marines. She is the subject of one of the paintings in “We The People: Portraits of Veterans in America,” an exhibition at the National Veterans Memorial and Museum that will run from Sept. 18 to March 14.
(USA/TNS)

“It was the most wonderful thing I’ve ever been through in my life,” she said. “I felt so honored, and there was so much camaraderie with the other vets.”

Eiche said she was thrilled with her portrait, which included her trucking travel partner, her dog Angel.

“I was flabbergasted when I heard Mary wanted to paint me,” Eiche said. “She said ‘watercolor’ and I thought it would be kind of washed out, but that woman can paint!”

Among Whyte’s other subjects: a barber from Tennessee, a Native American from South Dakota, an Oregon firefighter who suffers post-traumatic stress disorder, a biracial couple from New Orleans who met serving in the Air Force, and former Navy captain and astronaut Winston Scott of Florida, depicted by Whyte in a three-panel painting.

One of the stories that touched her the most, Whyte said, was that of Dennis, a homeless man living with his dog in a California forest. She found him through an initiative that helps homeless people, and she took her backpack, camera and a bag of dog food when she went to meet him.

“I got to know him and what a sweet, sweet man he is,” she said. 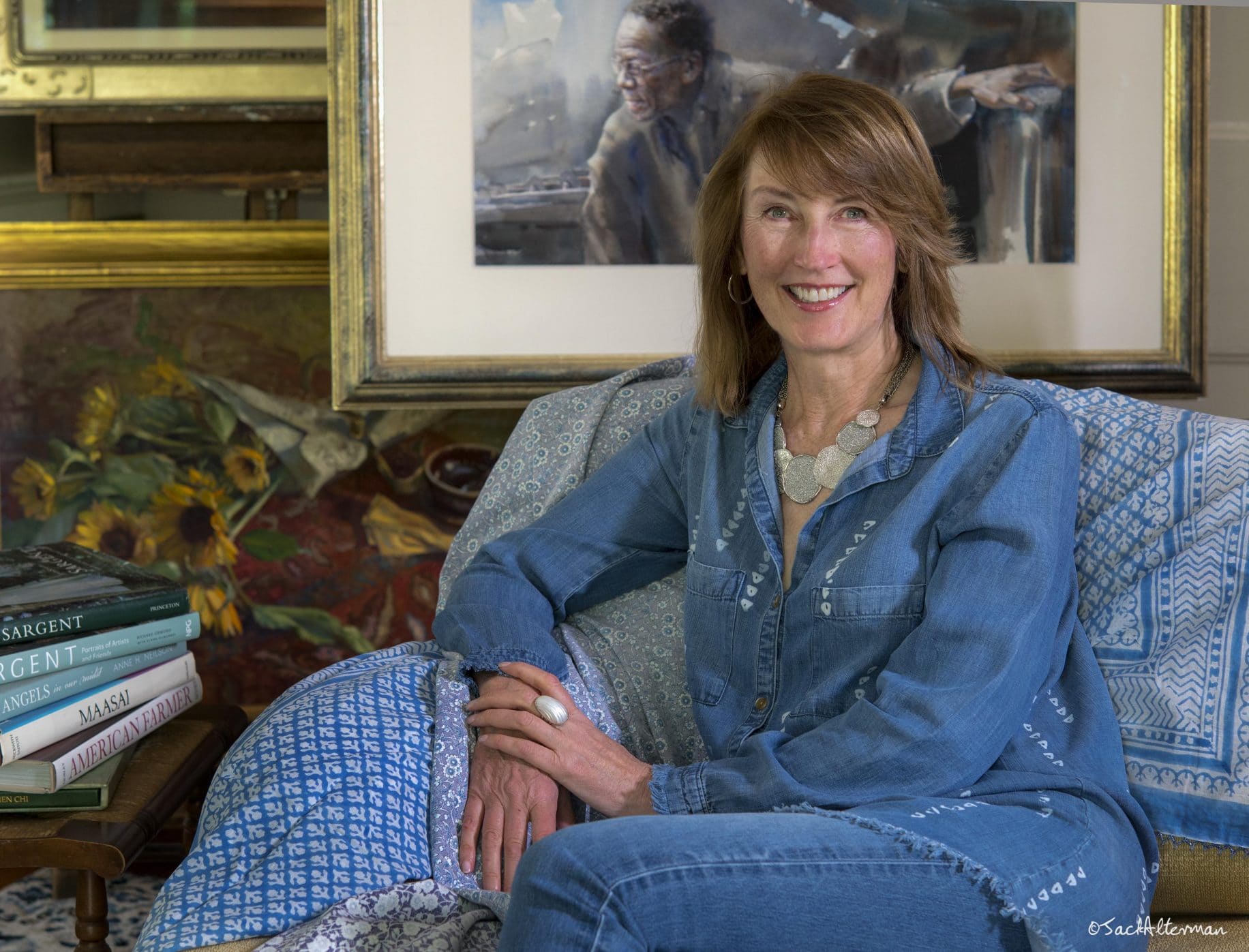 Dennis wanted to come to Charleston for the opening — all the veterans were offered paid travel and accommodation expenses — but he was beaten up before the event and unable to go. Whyte sent him a framed print of his portrait and a copy of the exhibit’s catalog. Dennis told her, “serving in the military was the one good thing I’ve done in my life.”

She said her subjects were modest about their military service, and a number of them asked not to have their last names used. In the catalog, she uses only their first names and state of residence.

In Columbus — where officials at the Veterans Memorial had reached out to Whyte to secure the exhibit — the artist will present talks, a live-streamed painting class and, conditions permitting, an in-person watercolor class. After Columbus, the exhibit will travel to Huntsville, Alabama, and Washington, D.C.

Michelle Brandt, owner of Brandt-Roberts Galleries in the Short North, curated “We The People” at the National Veterans Memorial and Museum, determining how best to display the portraits there. She said it is the sort of exhibit that will appeal to art lovers as well as to those who have little experience with art museums.

“I have veterans in my family, and I think this is a great body of work and an important exhibition, especially in these times,” Brandt said. “Art has always been able to transcend differences. Through the veterans she’s painted, Mary shows how diverse we are as a whole but how the veterans have this commonality of putting their country first.”

U.S. Army retired Lt. General Michael Ferriter, president and CEO of the National Veterans Memorial and Museum, said the project does justice to its subjects.

“Each veteran behind the portraits in ‘We The People’ has a story to share, and I respect and appreciate Mary Whyte’s dedication to honoring each of them through her incredible talent,” he said.

Whyte recently founded the Charleston-based Patriot Art Foundation to serve, through the power of art, those veterans who represent a small portion of the nation’s population.

“I represent the 99 percent of us who aren’t veterans,” Whyte said. “There are many countries in the world where I could not have done this — traveled anywhere I wanted in this country as a woman and painted what I wanted — and we have the veterans to thank for that.”