President Donald Trump arrived in Kenosha on Tuesday to a city divided over his visit, with small crowds of pro- and anti-Trump demonstrators gathering in a downtown shaken by a police shooting that last week left a Black man paralyzed and led to two fatal shootings in which an armed white teen has been charged. 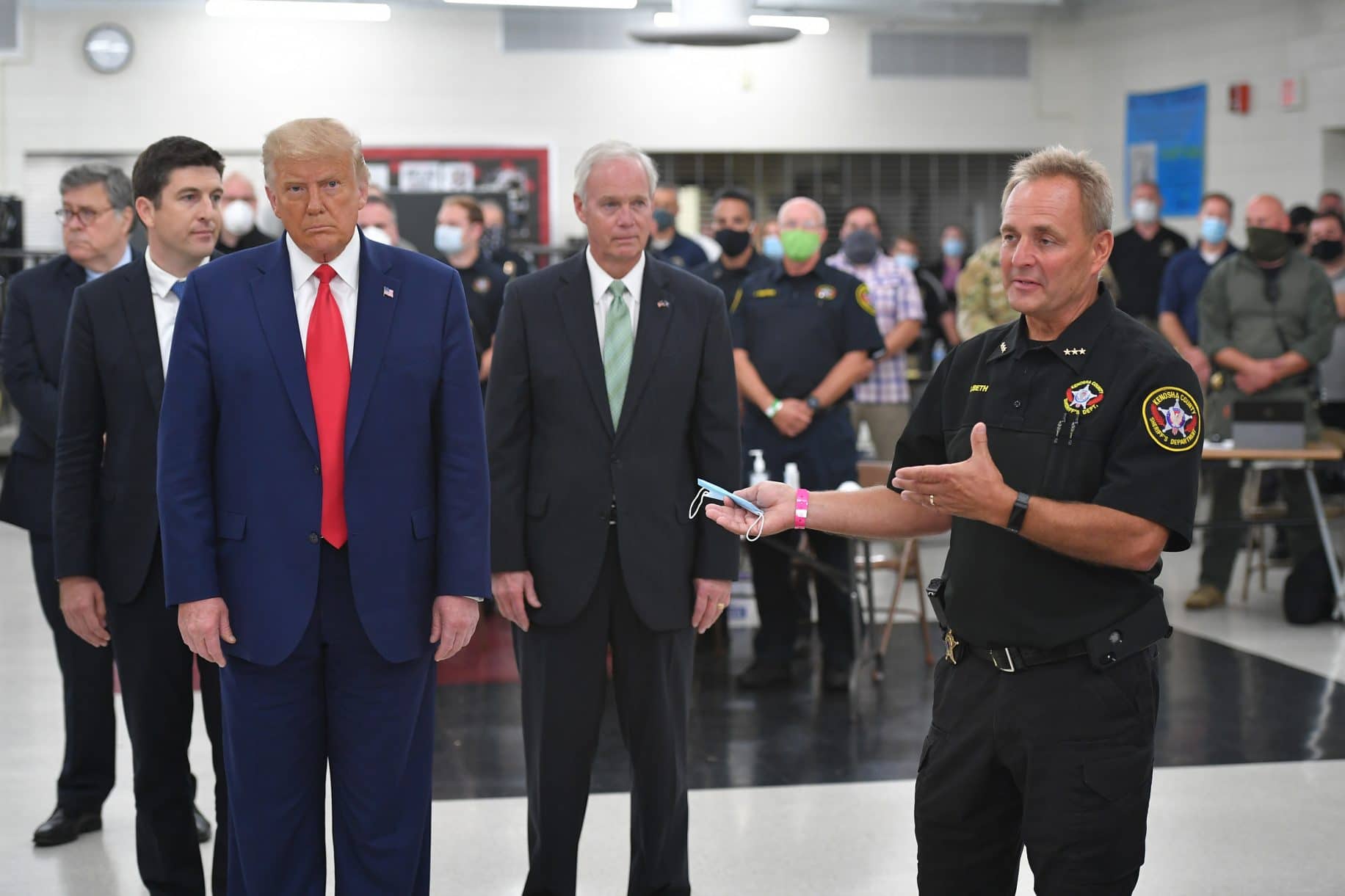 Before arriving, Trump, who rejected calls by state and local officials to cancel his visit, told reporters the mayor of this city of 100,000 was “stupid” and “very foolish.” The president took credit for the recent calm downtown after three days of violence that left buildings charred and several small businesses in shambles.

Trump told reporters at Joint Base Andrews before stepping aboard Air Force One that Kenosha “would have been burned to the ground by now” if not for the intervention of the National Guard. “It all stopped immediately upon the National Guard’s arrival.” Then he attacked Democratic Mayor John Antaramian, referencing a protest outside his house that Trump had watched on television. 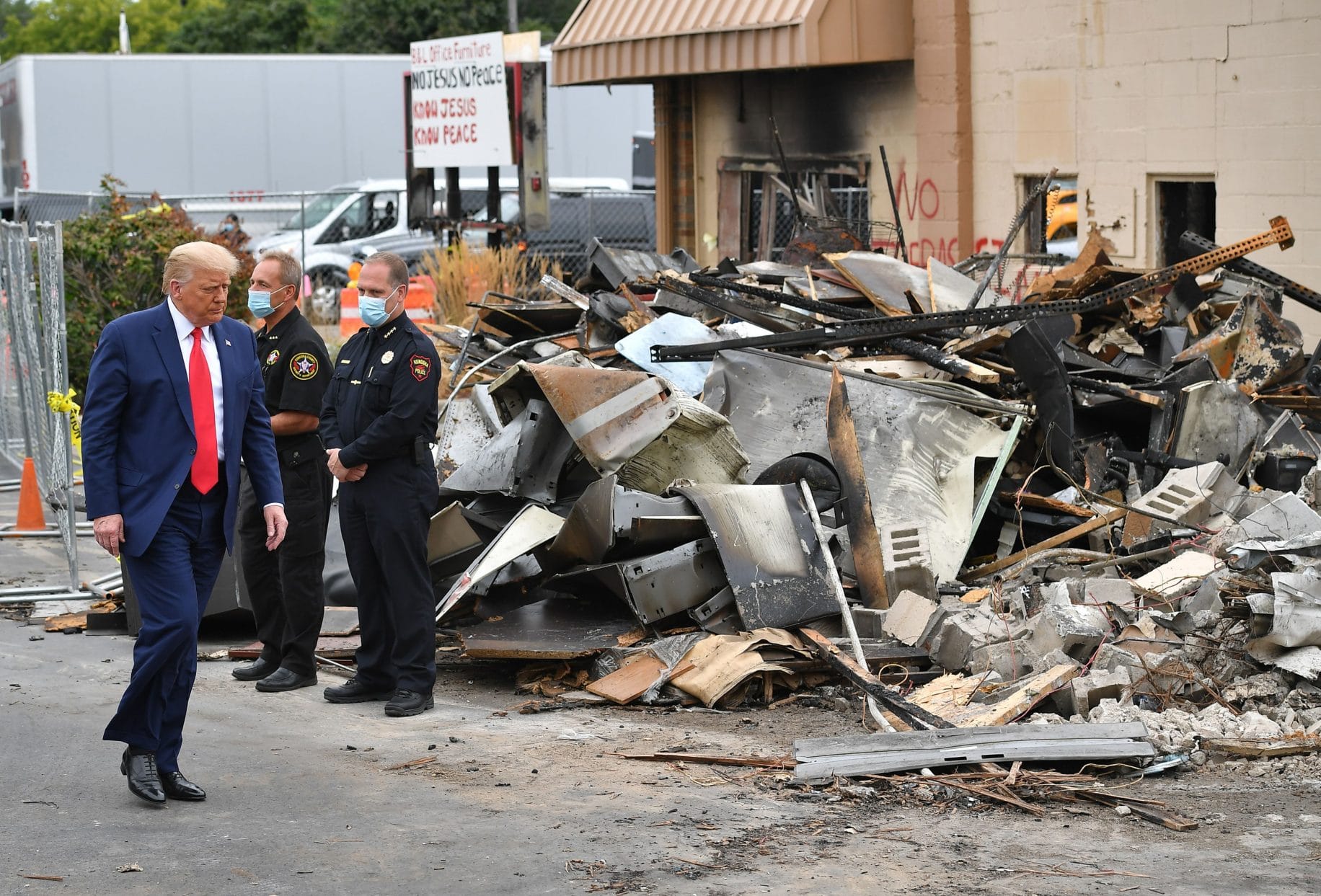 “I saw last night where these radical anarchists were trying to get into the mayor’s house and lots of bad things were happening to this poor, stupid, very foolish mayor. How he could be mayor I have no idea, but all he has to do is call and within 10 minutes their problem will be over. As you know, they have to call us. They have to call and request help.”

The Wisconsin National Guard has been in the city for more than a week at the request of Democratic Gov. Tony Evers, and federal law enforcement and National Guard troops from several other states joined later last week.

Trump flew into Waukegan National Airport, just south of the Illinois border, around noon local time and was scheduled to spend just under two hours in Kenosha at events including a tour of damaged downtown businesses, a visit to an emergency operations center at Mary D. Bradford High School, and a round table on community safety in Wisconsin. Trump was not scheduled to meet with the family of Jacob Blake, the Black man shot seven times by a police officer. 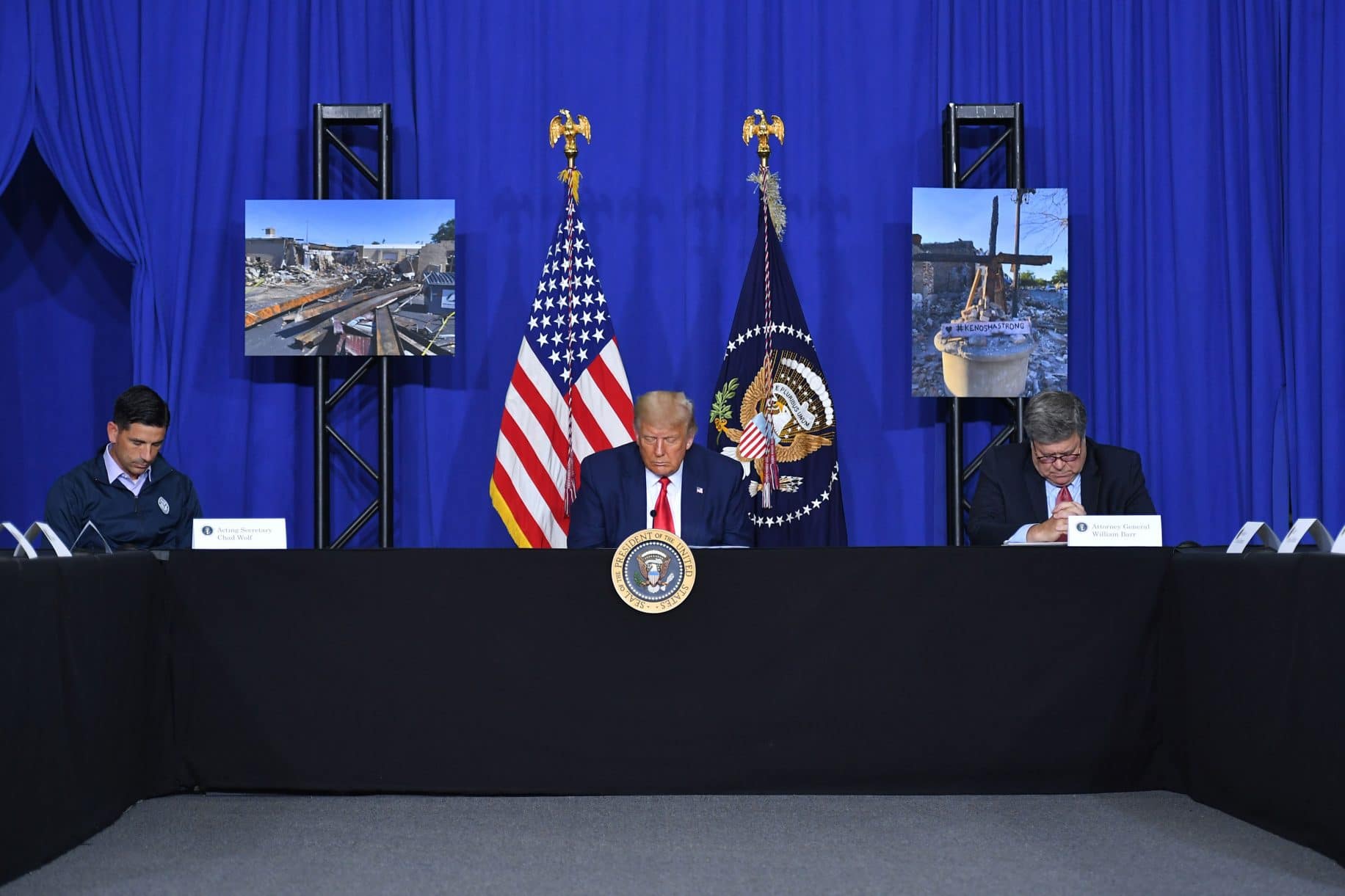 As people drank coffee at picnic tables outside Harborside Common Grounds, protesters jeered at each other. Sometimes drivers, joggers and bicyclists joined in, beeping and shouting encouragement or epithets.

Ken Miller, 53, a local machinist, helped other Trump supporters hold up a U.S. flag behind a Trump/Pence campaign sign. “I love Donald Trump. He’s the best president ever,” Miller said. “Because of Donald Trump, I have machines to run.”

Miller said it was appropriate for Trump to tour destroyed sites in the city’s small downtown and uptown neighborhoods, just as he visited communities after Hurricane Laura and other disasters. “It’s very important that the president comes,” he said.

David Swartz, 56, said he came to protest Trump’s use of his town as a campaign stop. Swartz, a union electrician laid off during the COVID-19 pandemic, attended recent protests in support of the Black Lives Matter movement, “because nobody deserves seven bullets in the back.” But he has brothers in the local electricians’ union who still support Trump.

“He’s dividing the country, dividing people, pitting them against each other,” Swartz said as he carried his sign on a street corner wearing his IBEW Local 127 jacket.

Kenosha has been under a curfew since last week due to protests and riots after a police officer shot Blake, 29, in the back Aug. 23 after officers showed up to a northwest neighborhood in response to a 911 call about a domestic dispute. Blake, who is in a Milwaukee hospital, is paralyzed. Three officers are on leave as the state and federal government investigate.

A 17-year-old from Illinois, Kyle Rittenhouse, is also charged with two murders stemming from a day of protest Aug. 25. Rittenhouse, who carried a rifle and said he was protecting local businesses, fled the scene and was arrested in Lake County, Illinois. His lawyers said he acted in self-defense, an assessment Trump agreed with in statements this week.

The shootings have further polarized the upcoming election in this swing state where Trump won by a small margin four years ago and where Democrats have helped former Vice President Joe Biden make gains. Trump is pushing a “law and order” theme and said he is against the Black Lives Matter movement. Biden, who has spoken to the Blake family, has blamed the president for enabling violence among alt-right and militia groups that have increasingly clashed with protesters of police violence.

Friends and members of the Blake family, who held their own event in the neighborhood where he was shot, asked Tuesday for Kenoshans to ignore the president’s visit.

“Our community is coming together across racial differences in an extraordinary show of resilience and compassion, and that is what we will continue to do on Tuesday,” said Tanya Mclean, a Kenosha resident who has helped the Blake family organize rallies in the last week and co-hosted Tuesday’s event. The gathering included voter registration, a food drive and community cleanup events.