As a fast-moving wildfire chewed forestlands near popular Sierra resort lakes above Fresno on Saturday, several hundred people were trapped with nowhere to go. Authorities told them to run toward the water of Mammoth Pool before being rescued by military helicopters through the ash and smoke.

Several dozen of the 214 people and 11 pets rescued from the Creek Fire during the operation’s six trips suffered burns and broken bones, trying to escape the fire “at all costs,” said one emergency official.

The daring chain of events came as California, particularly the Central Valley and mountains that rise to its east, continued to bake under bone-dry conditions and hot temperatures — creating extreme behavior and intense fire growth amid steep terrain and densely packed stands of trees inside Sierra National Forest. 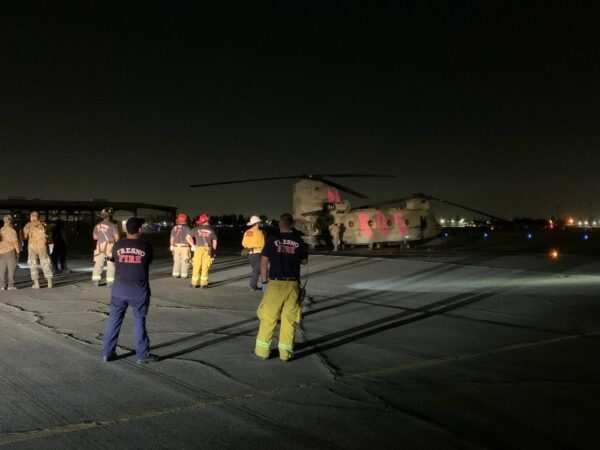 “We’re going to see a lot of fire in the next several days. This fire’s not going away,” said Fresno County EMS Director Dan Lynch. “We’ll probably see more devastation, hopefully not like the Mammoth Pool victims, but we’re going to see some destruction.

“It’s going to take some time to get this fire under control.”

The fire, which started Friday night and raged to more than 45,500 acres (71 square miles) about 20 miles southeast of Bass Lake and 40 miles northeast of Fresno, continued to burn without containment Sunday. The destruction by the fire, which started near Big Creek and Huntington Lake, continued unabated north along the San Joaquin River watershed across Fresno and Madera counties. At least 2,000 structures were threatened in the area Sunday.

The fire belched smoke across Central and Northern California, blanketing Sacramento, Lake Tahoe and Reno in clouds that could be seen from space. The haze did little to quell blistering temperatures in Sacramento, but once again put the capital region’s air quality in jeopardy much like the network of lightning complexes to the west have for the past three weeks.

Bishop, roughly due east of the Creek Fire on the east side of the Sierra, is taking the brunt of smoke. Air quality there Sunday afternoon is rated hazardous with an AQI reading of 449. Downtown Sacramento gauges topped 161 at 10 a.m., and Woodland had a reading of 196.

But the focus remained on Saturday night’s rescue around Mammoth Pond, a reservoir and popular camping area 12 miles north of Shaver Lake that’s buried in groves of Ponderosa pine and cedar at an elevation of 3,300 feet. Rescues were also made at nearby Cascadel Woods and an area known as Minarets.

Warnings for the Creek Fire had amplified across the mountain communities around Shaver Lake throughout Saturday, but intensified as temperatures in the area exceeded 90 degrees. Officials with the U.S. Forest Service estimated the size of the fire in the morning at about 600 acres. By 11 a.m., that had been revised to 2,000 acres. By 3 p.m., above 5,000. 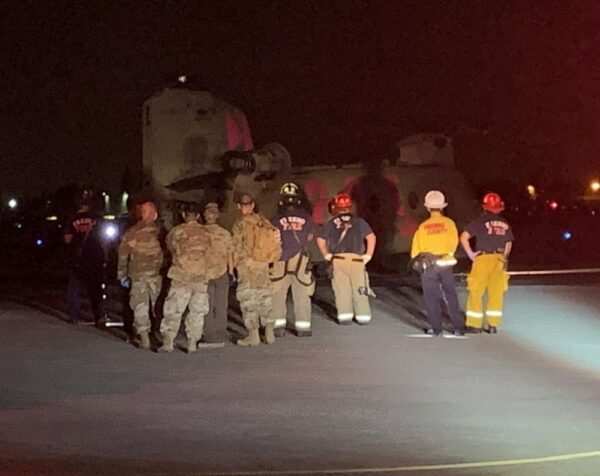 And as roads closed and the fire spread, said National forest spokesman Daniel Tune, alarms were raised about reports of more than 1,000 vacationers trapped near Mammoth Pool.

“There is an immediate threat to life,” the Madera County Sheriff’s Office warned. “The area is being closed to public access. Take action immediately.”

Those trapped were told to shelter in place — even if it meant getting into the water, Tune said.

It was not the first time people have sought shelter in water during one of California’s wildfire seasons. It happened as recently as 2018 during the Camp Fire at Concow Reservoir east of Paradise. By the end of Saturday night, the number of people was reduced. And although some were injured, most who were rescued were otherwise safely sheltering-in-place, the Sheriff’s Office reported.

Lynch said many of the rescued people had amazing stories to tell that included “heroics of family members helping family members.” 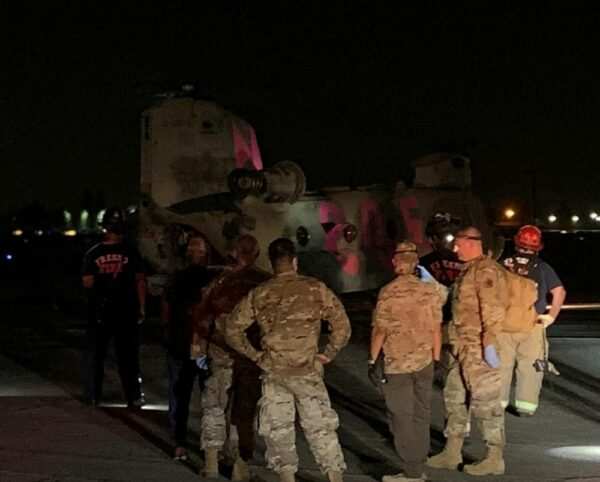 Black Hawk and Chinook helicopters were used to save families who were unable to escape as the Creek Fire crossed the San Joaquin River around just before 5 p.m.

A photo tweeted by the California Air National Guard showed at least 20 evacuees crammed inside one helicopter, crouched on the floor clutching their belongings. In another photo taken on the ground from a helicopter cockpit, the densely wooded hills surrounding the aircraft were in flames.

The operation by the Guard’s air wing, which is stationed in Fresno, was coordinated by the Madera County Sheriff’s Office and the Governor’s Office of Emergency Services.

By the end of the night, 218 people were rescued by helicopter, Lynch said. About 20 victims were transported to Fresno hospitals with injuries, including severe burns, broken bones, and other cuts and scrapes. Many were treated and released or remained hospitalized in good condition Sunday. No one was killed.

“Listening to the stories people were sharing, we have to assume these people were trying to escape with their lives intact. They had to make decisions that put their body in peril and caused them these injuries,” Lynch said. “They talked about there being fire on both sides of them while going down the road. There was one vehicle crash. People were stuck in the middle of flames.”

Many of the people who were rescued were picked from the airport triage area by family and friends, but more than 120 people spent the night at the coronavirus alternative care site set up at the Fresno Convention Center.

“It’s a blessing that we had it available to us,” Lynch said. “While it was initially set up to be overflow and help relieve hospitals of patients, the need changed during this very unique event in Fresno County, where the rescued individuals needed an immediate place to stay.”

Most people who were rescued had a place to stay by noon Sunday, Lynch said.

Many of them were big family groups from Southern California who visited Mammoth Pool on Labor Day weekend annually for years, Lynch said. They knew the area well, he said.

At a news briefing Sunday afternoon near Shaver Lake, Fresno County Supervisor Nathan Magsig, who represents areas in the eastern part of the county, said the fire was nearly controlled before it exploded.

“When it was first discovered it was only 3 acres,” Magsig said. “Aircraft were deployed to knock the fire down. They thought they had it pretty well handled. It was knocked down to less than an acre. But within a matter of really just a handful of minutes the fire exploded and was up to 300 acres.”

The cause of the fire, which broke out Friday night, remains under investigation.

It also is possible that Bass Lake will also go under an evacuation warning in the next few days.

“Because the wind conditions up here are strong with just the huge temperatures on the Valley floor the winds pick up very quickly throughout the day here and so the fire will move in different directions,” Magsig said during the afternoon briefing. “It will move north and east, but then it will quickly move south and west. It has been very difficult to contain this fire.”

Lynch, Fresno’s emergency director, urged residents living in the areas to evacuate early, even if there wasn’t an order in place yet. That would help firefighters, and sheriff’s deputies knock out the fire without worrying about people’s safety.

North in Madera County, Sheriff Tyson Pogue declared a state of emergency. His office said Sunday afternoon that an evacuation order for the town of North Fork was likely imminent.

Many vacationers caught off guard

Diana Giraldo and her partner, Miguel Vera, had no reason to believe their weekend backpacking trip on the Quartz Mountain trail would be anything out of the ordinary. They checked in with a ranger on Friday, who told them the only thing to look out for were summer thunderstorms that are typical in the Sierra.

The two Fresno residents are experienced hikers and backpackers. Before every outing, they check the weather and air quality and call a ranger’s station and obtain a wilderness permit if necessary. On Saturday morning, there were no red flags, Giraldo said.

But as soon as they parked and hit the trail around 2 p.m., black leaves of ash rained down on them. They heard thunder and started seeing lightning. They only hiked a third of a mile before deciding to turn back. Five minutes later, they received an emergency alert to evacuate due to the Creek Fire burning nearby.

They stopped at a lookout and saw the wildfire coming toward them.

“You could also see how the embers from the big fire were catching the other part of the forest on fire. It was a sight I never thought I’d see,” Giraldo said. “That smoke was right in front of us.”

Giraldo said the emergency alert to evacuate was life saving. She and Vera expressed their appreciation to the first responders keeping people safe and rescuing people.

Other fires burning in California

The Creek Fire is one of three major wildfires in the state to break out during the Labor Day weekend — and the first new surge of blazes since a lightning siege last month ignited more than 900 blazes, mostly centered around the Bay Area and along the eastern slopes of the Coastal Range near Redding.

Amid more than 1.6 million charred acres, there have been eight fatalities and nearly 3,300 structures destroyed this summer, fire officials said.

On Sunday, there were more than 14,800 firefighters battling 23 major fires across California.

In Southern California, crews scrambled to douse several fires that popped up. The largest was the El Dorado Fire in the foothills of Yucaipa east of Los Angeles. It prompted evacuation orders for eastern portions of the city of 54,000 along with several mountain communities. The California Department of Forestry and Fire Protection, known as Cal Fire, said the fire scorched at least 3,000 acres of brush and trees.

In eastern San Diego County, the Valley Fire broke out Saturday afternoon and fire officials warned the blaze was burning at a “dangerous rate of speed.” By Sunday morning it had destroyed at least 10 structures after burning 4,000 acres and prompting evacuations near Alpine in the Cleveland National Forest.