Pics: ‘In front of me represents death’: 6.5 kilos of fentanyl worth $1.4 million seized from 2 ’highly organized’ drug rings based in Massachusetts

On top of a table set up outside the Massachusetts State Police headquarters in Framingham on Monday sat $1.4 million worth of fentanyl.

“This literally in front of me represents death,” said State Police Colonel Christopher Mason, who spoke at a podium behind the thousands of grams of narcotics during a morning press conference. 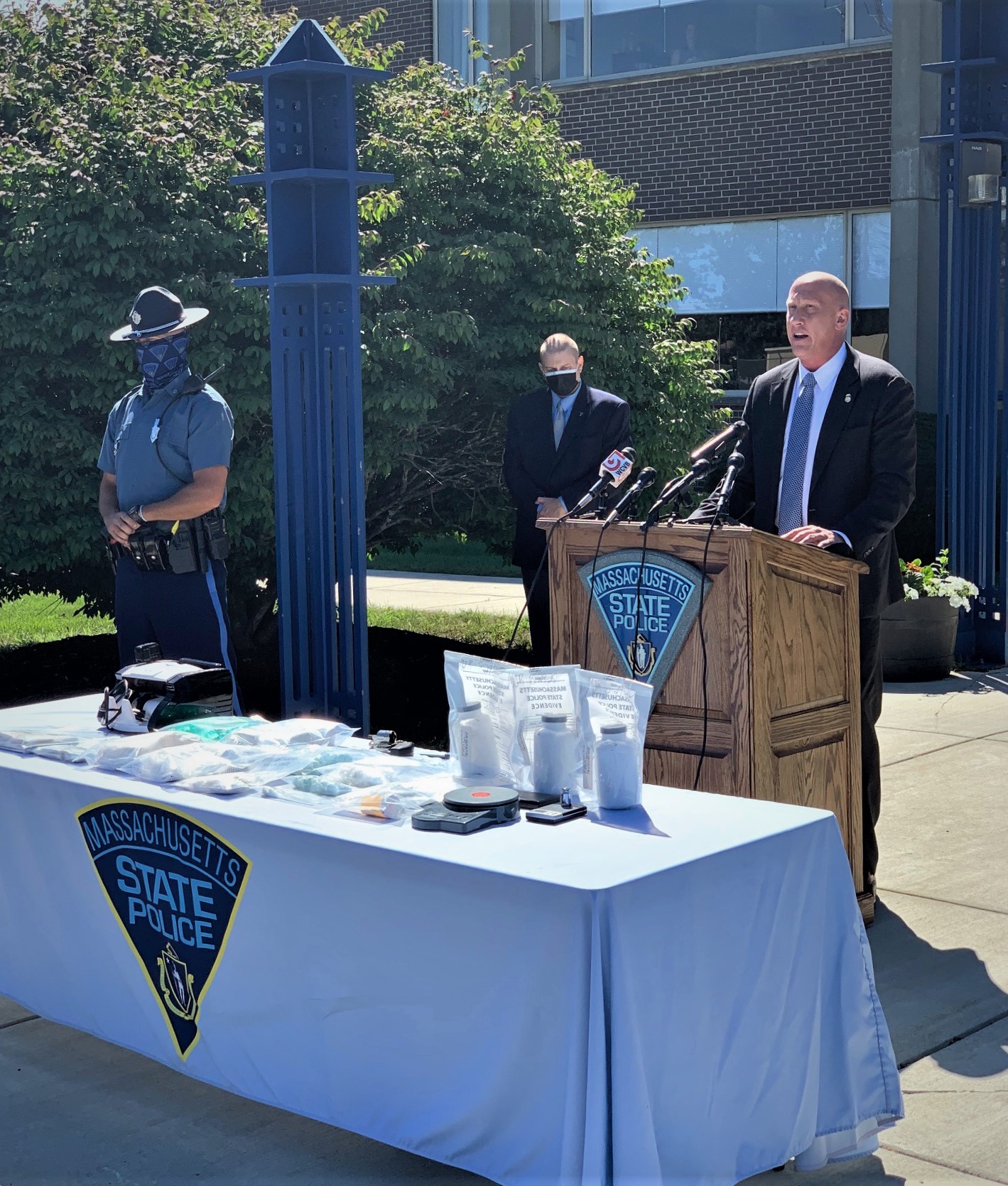 Within 48 hours, a task force composed of Brockton and East Bridgewater police, state troopers and agents from Homeland Security Investigations targeted alleged drug suppliers in Lawrence and Methuen as well as distributors in Fall River, according to Mason.

A total of 6.5 kilograms of fentanyl was seized as well as several milligrams of oxycodone, numerous Xanax pills, a gun and thousands of dollars in cash believed to be the profits of illegal drug sales

“The danger of 6.5 kilos of fentanyl in our communities cannot be measured,” Mason noted at the press conference. 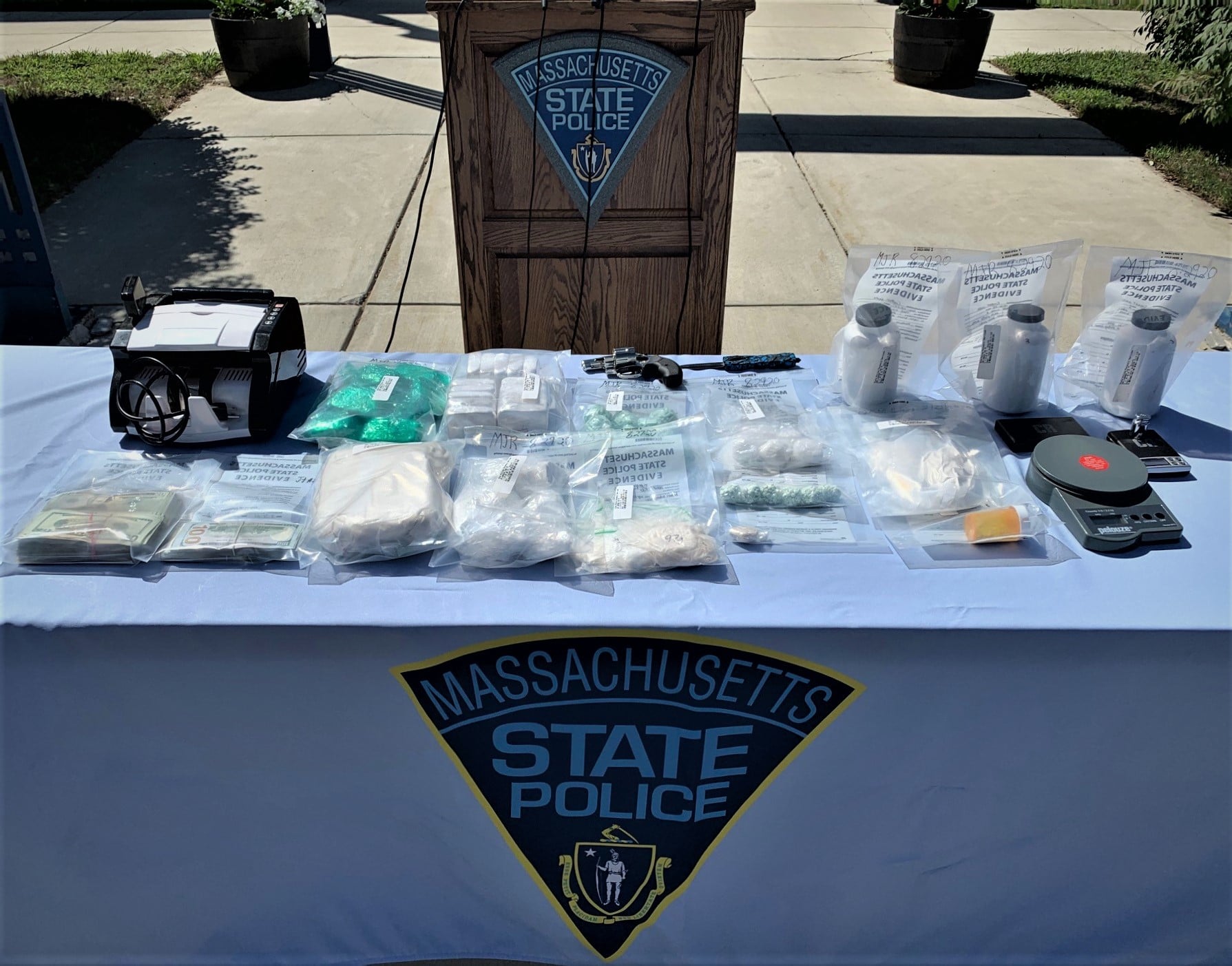 On Thursday, police were investigating two individuals in Fall River accused of distributing fentanyl and cocaine. Authorities executed a search warrant on their car and found roughly $11,600 dollars in cash believed to be the proceeds of narcotics trafficking, according to the state police colonel.

Another eight bricks of fentanyl were also found as well as two other plastic bags of the narcotic, additional cash, a digital scale used for drug sales and documents showing residency of an apartment, according to state police. 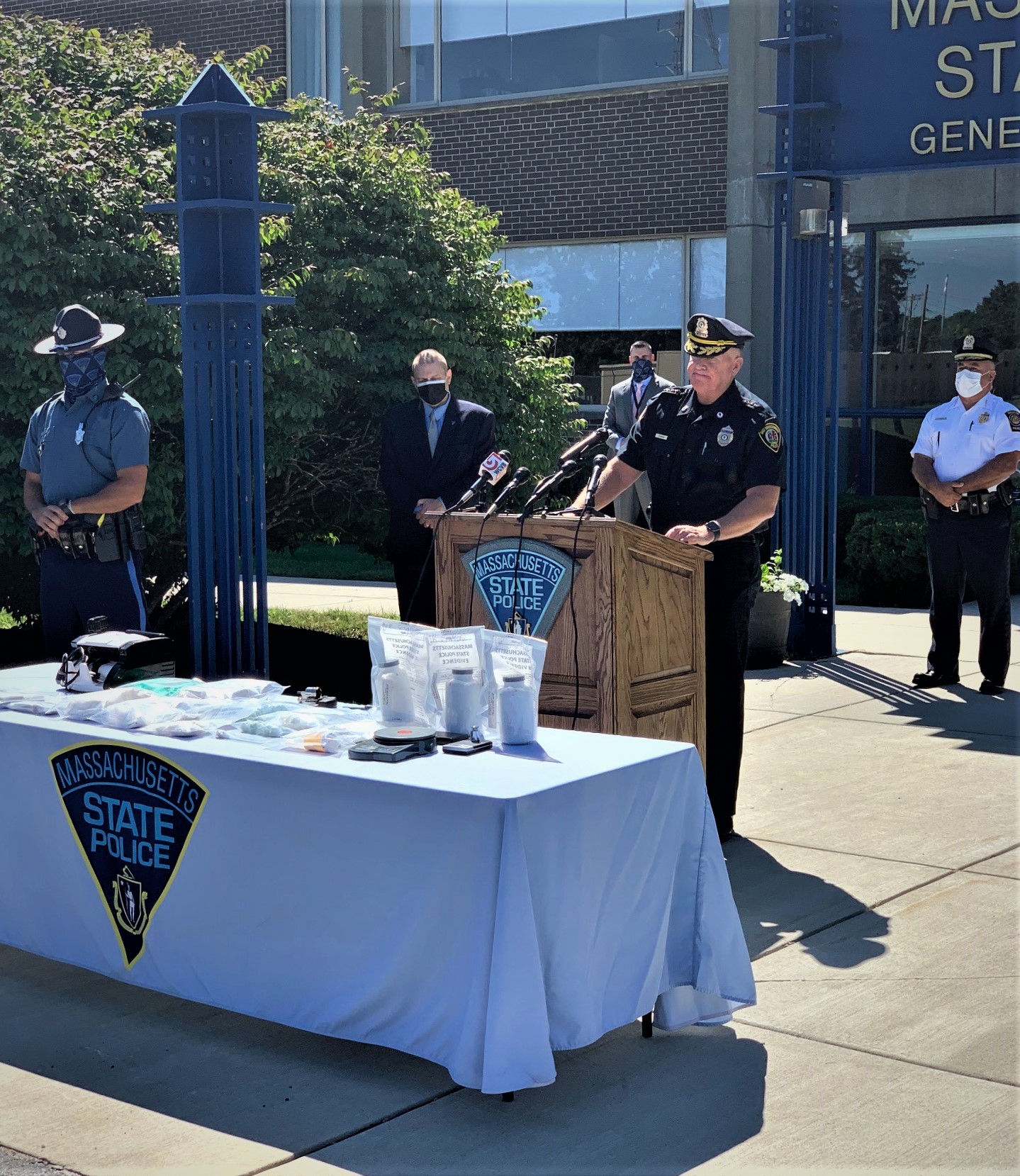 Thursday night, CINRET investigators arranged for a delivery of fentanyl from the supplier to Fall River.

The suspect, later identified as Jose Baez-Lara, was arrested. In the man’s possession, officials claimed, was a gift bag of 15 block packages of fentanyl.

The 32-year-old Lawrence man was booked on narcotics trafficking charges. The two alleged fentanyl distributors in Fall River will also face drug charges, according to Mason, but no further information was released about the suspects Monday morning.

Officers, troopers and agents from the task force surveilled a car from a suspect’s home in Methuen and tracked it south on Route 3 to Boston, at which point they pulled over the vehicle and seized 2 kilograms of fentanyl, according to authorities.

Two women were arrested in connection to the drug bust. They were booked at the state police barracks in South Boston, officials said.

Surveillance remained in place at the home in Methuen until authorities were granted a warrant to search it on Saturday.

The search led to the discovery of more fentanyl as well as methamphetamine, numerous blue and green pills believed to be Xanax, 30 milligrams of oxycodone and $8,100 in cash that authorities claimed were the proceeds of narcotics sales, Mason said.

Anthony Levine was allowed to leave the home before authorities searched it due the length of time it took for law enforcement to secure the warrant, according to state police.

The 30-year-old Methuen man was on a functioning monitoring bracelet due to previous narcotics and firearms charges out of Norfolk Superior Court.

However, the bracelet stopped working shortly after Levine left the home he was in. State police are now actively searching for him, Mason said.

At Monday’s press conference, the colonel noted that both Baez-Lara and Levin were allegedly able to move large quantities of narcotics within a few hours, leading investigators to believe the suppliers had large quantities of fentanyl on hand or within easy access.

The two men are suspected to have been supplying fentanyl and heroin to street-level dealers for more than a year, at least, Mason said.

“I think the message here is that we’re still very much in the game, despite COVID and despite the other things that are going on both locally and nationally,” he said about the dual drug busts. “At the heart of that is dismantling these drug trafficking organizations.”

Partnerships between local and state police as well as federal agents are key to dismantling those narcotics operations, the colonel said.

“We’ve had the unpleasant occasion to have to speak to a number of families that have suffered a loss due to opioids, so we understand the impact this has, the ripple effect this has in our communities,” Mason said.

Homeland Security Investigations Deputy Special Agent-in-Charge David Magdycz, who spoke at the press conference Monday, emphasized that most of the narcotics seized last week as well as much of the fentanyl in Massachusetts is not from the area.

Fentanyl, one or two grains of which could kill a person, is not sourced from Boston but is shipped instead from outside the country, Magdycz said.

“We cannot and will not stand idly by as criminal organizations target our citizens as a means of profit with blatant disregard for their health and safety,” Magdycz said. “This country has been flooded with fentanyl and its analogues being shipped from China and Mexico with purity levels never seen before.”