Military vehicles were seen driving through the streets of Cleveland as the city prepares for the presidential debate at the Cleveland Clinic main campus. (John Kuntz, cleveland.com/TNS)
September 29, 2020 The Plain Dealer - TNS
Share
Tweet
Flip

On Monday, security officials placed the same tall metal fences that were a significant presence around the 2016 RNC security zone around the pavilion on the Cleveland Clinic’s campus that will play host to Tuesday’s presidential debate.

A gate is used to let vehicles into the hospital zone after inspection on Chester Avenue near the site of the presidential debate at the Cleveland Clinic main campus. (John Kuntz, cleveland.com/TNS)

Cleveland returns to the national political stage Tuesday, and President Donald Trump squares off against Vice President Joe Biden in the first debate of the 2020 general election season.

The televised debate marks the first major political event to grace Cleveland since the 2016 Republican National Convention, where Trump accepted the GOP nomination. It also comes as the city and nation continue to struggle with the coronavirus pandemic.

The Cleveland Clinic and Case Western Reserve University are hosts of the debate at the Sheila and Eric Samson Pavilion on the Clinic’s campus. Barricades and a significant law enforcement presence greeted motorists traveling the usually busy streets Monday around the campus. 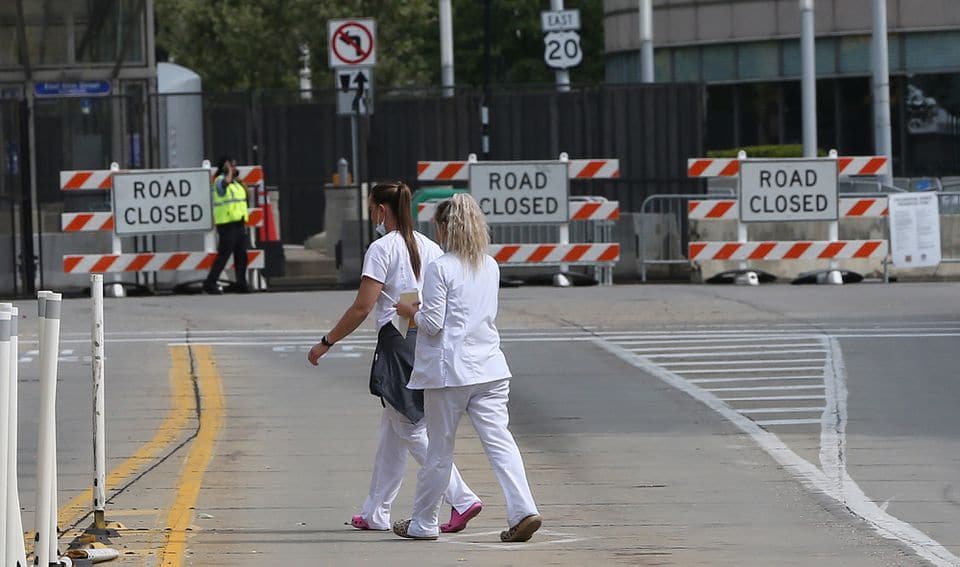 Villa shoe store at the corner of East 79th Street and Euclid Avenue was one of the most prominent buildings near the Clinic to board up its windows, shades of downtown Cleveland which saw some business looting after the May 30 George Floyd protests downtown. First-floor residents of some neighboring apartment buildings also covered their windows with plywood.

Security officials Tuesday will close stretches of Chester and Euclid avenues between East 105th and East 89th streets. Portions of streets near the debate north of Carnegie Avenue will remain open to Clinic patients.

Euclid Avenue is closed by the Cleveland Clinic main campus as security measures are in place for the presidential debate in Cleveland. (John Kuntz, cleveland.com/TNS)

The 90-minute debate begins at 9 p.m. and will air on most major networks and cable news outlets. Fox News anchor Chris Wallace will moderate.