Shortly after 11 a.m., as members of the 36th Infantry Division band played the national anthem, four helicopters hovered over Kelly Reeves Athletic Complex in North Austin, the rumble of their rotors temporarily drowning out the patriotic brass as every eye in the crowd was drawn upward.

The air was thick with a mixture of pride, excitement and sadness Sunday as more than 700 Texas National Guard soldiers set to deploy to the Middle East stood in formation on the football field with families scattered through the stadium looking on.

The soldiers will travel to Fort Hood for a month of training, followed by a nine-month overseas tour of duty. The division will support Operation Spartan Shield, an ongoing Department of Defense operation headquartered in Kuwait. It’s the largest deployment for the Texas Military Department this year.

Sgt. Eric Chacon, a medic who will be deploying for the second time overseas, said the most challenging part is “getting used to a routine” of active-duty service after life at home. As he prepared to leave, he said his emotions are all over the place. His daughter recently turned 1 year old, and this will be his first time away from her. 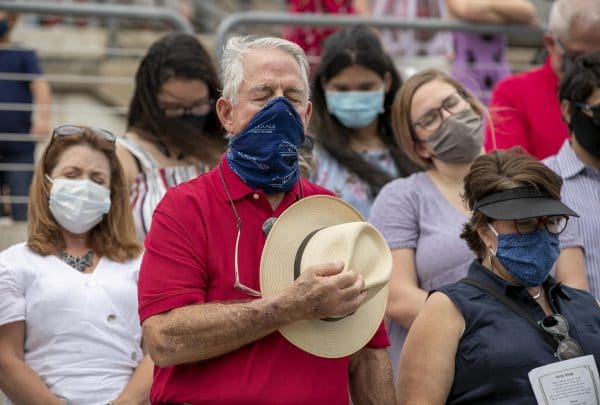 Felix Munson of Round Rock prays for the safety of the soldiers as they prepare to deploy to the Middle East. [JAY JANNER/AMERICAN-STATESMAN/TNS]

“It definitely gives me a lot of emotions as far as that goes: happy, at the same time sad,” he said.

Spc. Alyssa LaFosse, also a medic, said she was “very excited” about her first overseas tour.

“My family is a military family, so this isn’t anything new,” she said.

Sgt. David Moran III tries to teach his 9-month-old daughter, Penelope, to walk before he boarded a bus at the 36th Infantry Division deployment ceremony at Kelly Reeves Athletic Complex on Sunday. Seven hundred Texas National Guard soldiers were sent on a nine- to ten-month deployment to the Middle East for Operation Spartan Shield, which seeks to strengthen relations with partner nations. [JAY JANNER/AMERICAN-STATESMAN/TNS]

“Coming from a medical standpoint, I like that I’m not only able to help my people, but also potentially help the people in the countries that we’re going to see,” LaFosse said.

During the deployment ceremony, Maj. Gen. Patrick Hamilton, the commander of the 36th Infantry Division, said his troops have been preparing for this deployment with training exercises for two years. In recent months, he said his division has done an “outstanding job in spite of overwhelming odds with COVID and limitations of travel and the things we would normally do as a division.”

Brig. Gen. Win Burkett tries to comfort Ricky Rodriguez-Lopez, 5, of Killeen, who was in tears when his sister, Spc. Brania Rodriguez Lopez, boarded the bus after the deployment ceremony. [JAY JANNER/AMERICAN-STATESMAN/TNS]

“I am confident that this fantastic group of soldiers on this field is ready to go and assume mission command in the Middle East,” he said.

He thanked the families who gathered to see their loved ones off for their support and “selfless service.”

Before he released the soldiers to eat a final lunch with their families, Hamilton spoke of how honored he was “to serve as part of this 1% of America who raises their right hand and swears an oath.”

Capt. Benjamin Smith kisses his girlfriend, Belle Alvarez, ahead of a long separation while Smith is deployed overseas. [JAY JANNER/AMERICAN-STATESMAN/TNS]

“It’s not an oath to a flag or to a president; it’s an oath to support and defend the Constitution of the United States against all enemies, foreign and domestic,” he said. “The Constitution is that single document that allows us to be here today, to worship as we want to worship, to celebrate what we want to celebrate, to know that we will be judged by our depth of character and that we will succeed or fail, rise or fall based on our individual level of effort and our confidence. There’s nothing more that we can ask than to defend those rights.”