National Guardsman Ryan Steiner was preparing to deploy to Afghanistan in 2018 when he and his wife bought a home in Belmont Heights for $140,000.

The couple was about to marry and planned to start a family. They moved in before Steiner left for three months of military training and a nine-month tour of duty.

A few weeks after moving in, Steiner’s wife, Paige Skinner, began to have breathing difficulties and a cough. The couple thought it must be the mold they found in the kitchen when they remodeled it. But that didn’t explain why the air-conditioning unit broke down. Or the black spots that appeared on mirrors and copper wires on their appliances. 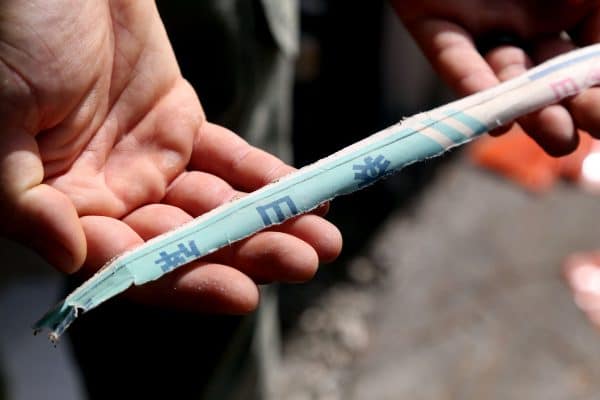 Ryan Steiner holds a strip of paper displaying a manufacturer’s stamp that he recovered from a section of drywall on an interior wall in the garage of his home. The drywall tested as toxic.
(Douglas R. Clifford/Times/TNS)

Then Steiner learned from a neighbor in April that other homeowners on the same street had reported health issues and damaged appliances. The cause: toxic drywall imported from China, the material that marred an estimated 100,000 U.S. homes built during the real estate boom that peaked around 2006.

A $1,300 environmental study of the home confirmed Steiner’s worst fears.

The U.S. Consumer Product Safety Commission has determined that drywall or gypsum board should not contain more than 10 parts per million of elemental sulfur. Drywall taken from the couple’s bedroom had Chinese markings and a sulfur level of 33 parts per million.

Worried about his wife’s health, Steiner took out a second mortgage through the U.S. Department of Veterans Affairs and last month moved his wife and their puppy into a home in South Tampa. But the family is stuck with a home they cannot rent for health reasons and cannot sell without taking a financial hit. 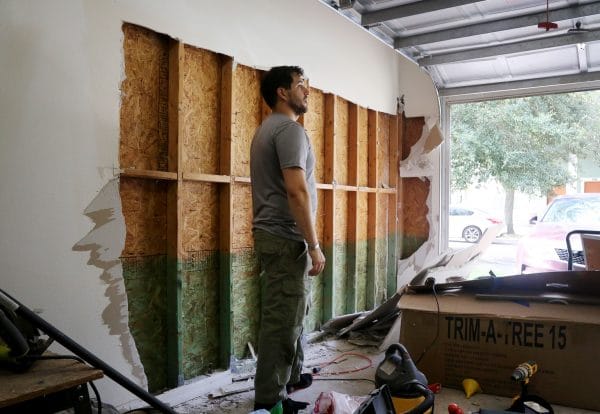 National Guardsman Ryan Steiner, 30, stands in the garage of his home on Machado Street in Tampa. Steiner said he demolished a section of drywall in the garage, at left, to find the manufacturer’s stamp so he could identify the origin of the building material.
(Douglas R. Clifford/Times/TNS)

“We put so much work into this house,” Steiner said. “We had to move out. We can’t start a family here.”

A check for toxic drywall is not part of the standard home inspection. Steiner’s only hope of recouping his money may be to sue the seller, Turner’s Elite Home Improvements, a real estate business owned by Antwoin Turner.

“They are obligated to disclose that information to the buyer,” she said.

But Steiner’s hopes of suing Turner took a twist in July when Turner was arrested for second degree murder by the Orange County Sheriff’s Office. Turner, 32, was transferred on a warrant to Osceola County for a separate charge of dealing fentanyl and cocaine.

Turner could not be reached for comment. Michael LaFay, an Orlando attorney representing him, did not return an email or a phone call.

Steiner then learned that the previous owners of the home on Machado Street sent reports to the Hillsborough County Property Appraiser showing the home had Chinese drywall as far back as 2009 to lower their tax assessment.

The most recent was in 2015. Wells Fargo Bank foreclosed on the home after the original owner walked away because of the drywall and reported that the home had not been repaired.

It was one of 12 homes built around 2006 as part of the redevelopment of Belmont Heights. The project was funded through a $35 million federal Hope VI grant to replace two aging and dilapidated public housing complexes.

Families were encouraged to become first-time home buyers by the Tampa Housing Authority through a program that supplemented their mortgage with federal and city of Tampa grants. All 12 homes had toxic drywall.

A 2016 Tampa Bay Times investigation revealed the plight of four families still paying mortgages on homes that were virtually worthless. The county and the city obtained grants to pay for the homes to be rehabbed.

But it’s unclear if Steiner would get similar help as his purchase did not involve a government agency.

Steiner is questioning why the Property Appraiser’s Office doesn’t flag properties reported as having toxic drywall. Will Shepherd, the office’s general counsel, said it’s impossible for the agency to list on its website every defect reported by homeowners looking to lower their property tax bills. The office hears reports about damaged roofs, sinkholes and other maladies.

Those reports are available on request, he said.

As many as 1,000 residences in Hillsborough were classified as having toxic drywall. That number has dwindled to about 70, Shepherd said.

The agency follows up every year or so to determine if repairs have been made. If there is no response, the home is revalued for tax purposes, he said. That process was introduced after the agency became aware that some homes had been repaired without permits.

After speaking with a Times reporter, Shepherd said his agency will contact the Florida Department of Revenue to seek a refund for Steiner for his past two property tax bills.

“That would be amazing,” Steiner said.