Michigan Gov. Gretchen Whitmer says she expects the U.S. Air Force to comply with strict new state standards while cleaning up toxic fluorochemicals at the former Wurtsmith Air Force Base in Oscoda.

In a Tuesday, Sept. 22 letter, Whitmer urged Air Force leadership to comply with state cleanup laws that were established in July for PFAS chemicals in groundwater.

The new standards are lower than a federal advisory level the military is using as remediation threshold around the country. The Air Force has thus far only committed to evaluating whether to comply with Michigan’s lower PFAS standards for ground and surface water pollution.

PFAS foam gathers along a beach shoreline along Van Etten Lake on June 7, 2018 in Oscoda Township near Wurtsmith Air Force Base. Per- and polyfluoroalkyl substances, or PFAS, are generating substantial public health concern across Michigan, the United States and other countries. The chemicals are polluting drinking water and the environment at sites where they were used and discarded by industry, or seeped into the ground as leftover contaminants in chemical-based firefighting foam
( MLive.com Jake May/TNS)

“The State of Michigan expects that the Air Force will meet Michigan’s PFAS clean-up standards,” Whitmer wrote in the letter to John Henderson, assistant Air Force secretary overseeing installations, energy and the environment.

In the letter, Whitmer credits the Air Force for showing “renewed efforts” to expand stopgap cleanup measures that local activists have sought for years. In August, Henderson visited Oscoda and outlined plans to intercept PFAS plumes entering Van Etten Lake, where the chemicals are creating a microlayer on the surface that results in toxic beach foam. 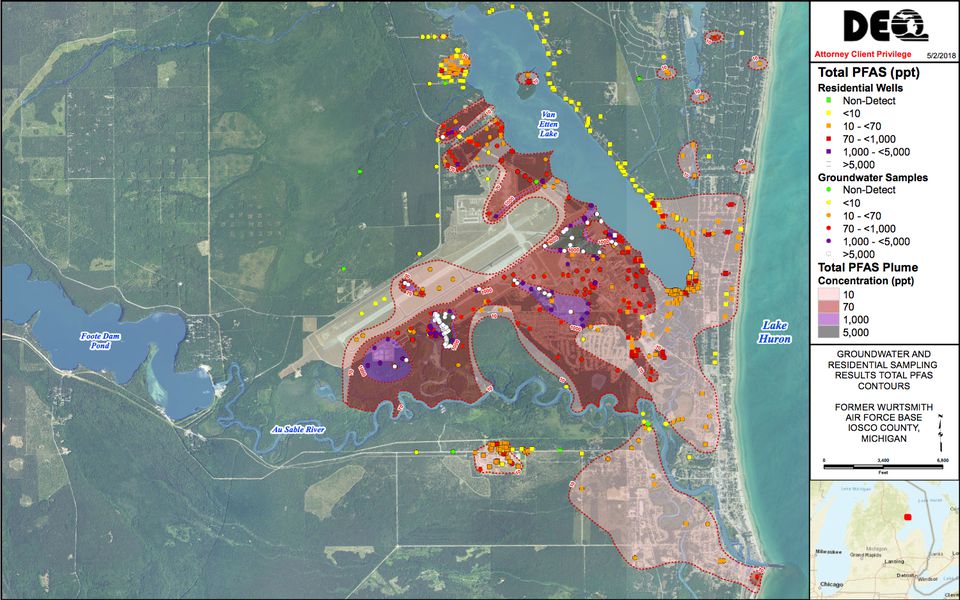 A May 2, 2018 plume map showing total PFAS concentrations in the groundwater around the former Wurtsmith Air Force Base in Oscoda. The Michigan DEQ and U.S. Air Force are in a formal dispute over the pace and adequacy of PFAS cleanup at the base.
(Garret Ellison | MLive/TNS)

The visit was on the invitation of U.S. Rep. Dan Kildee, D-Flint, who has been pushing the Air Force to perform interim cleanup using millions in newly appropriated money while site managers work through a years-long federal remediation process named CERLCA.

“However, it is long past time for the Air Force to commit to an aggressive clean-up plan and engage in extensive interim actions to stop the spread of PFAS contamination at and around Wurtsmith,” Whitmer wrote.

Wurtsmith Air Force Base in Oscoda served primarily as a combat crew and bomber training base between 1923 and 1993, when it closed. Wurtsmith played an important role in World War II, Vietnam and the Persian Gulf War, hosting the 134th Army Air Force Base Fighter Unit and 379th Bombardment Wing.
(MLive file photo/TNS)

Whitmer’s letter follows Sept. 18 correspondence between the Air Force and the Michigan Department of Environment, Great Lakes and Energy (EGLE) about state cleanup requirements that go by the clunky acronym “ARARs,” (applicable or relevant and appropriate requirements).

Under CERCLA, (the Comprehensive Environmental Response, Compensation, and Liability Act), the military is required to comply with state ARARs at certain stages of site cleanup.

However, the Air Force has balked at committing to Michigan’s PFAS standards, which are among the lowest such requirements in the nation. Site leaders have tried to invoke arguments about federal sovereign immunity from state law during past correspondence.

The ambiguity has led to pending Congressional legislation introduced by U.S. Rep. Elissa Slotkin, D-Holly, who has authored language in the must-pass National Defense Authorization Act (NDAA) that would require the military to use the most stringent applicable standard during site cleanups at places like Wurtsmith or Camp Grayling.

Impassioned residents demand answers and solutions outside of Robert J. Parks Library, protesting for clean water before a Restoration Advisory Board meeting on June 6, 2018 in Oscoda. These residents are asking the Air Force to claim responsibility for damages after findings of high levels of the toxic chemical PFOS in the foam near a plume coming from the former nuclear bomber base. PFAS foam continues to rise up on the shoreline of Van Etten Lake almost daily, and residents are demanding answers and solutions
(MLive.com Jake May/TNS)

In Michigan, compliance with new state law would entail cleaning up the individual compound PFOA in groundwater to 8 parts-per-trillion (ppt) and the compound PFOS to 16-ppt.

Michigan also has a surface water standard of 14-ppt that was established back in 2014, long before most people were aware of the threat posed by exposure to PFAS chemicals.

That rule was promulgated to guide fish consumption advisories in water bodies around Wurtsmith, which is polluted due to past use of firefighting foam called AFFF.

The Air Force says its cleaning polluted groundwater that’s going through an on-site treatment facility to the 12-ppt level before discharging it to a creek that feeds the Au Sable River.

“I ask that the Air Force carefully review EGLE’s list of ARARs and commit to apply these standards to ensure the clean-up protects public health and the environment,” Whitmer wrote.

Activists say they are encouraged by Whitmer’s letter.

Tony Spaniola, an attorney and leading PFAS activist in Michigan who owns a home on Van Etten Lake across from the base, said he’s pleased that Whitmer has “entered the fight and thrown the weight of her office behind our cause in Oscoda.”

Spaniola said Whitmer visited Oscoda and spoke to pollution activists in 2018 during her campaign for governor.

“We look forward to working with her and our champions in Congress to hold the Air Force’s feet to the fire,” he said. “There’s a long way to go, but this is a step in the right direction.”

Jennifer Hill, associate director at the National Wildlife Federation’s Great Lakes center, said the governor should take the “next logical step” by “utilizing her authority under the National Defense Authorization Act to require the Department of Defense to comply with Michigan’s clean-up standards for PFAS at Wurtsmith.”

“The longer the Department of Defense waits, the more costly the solutions and adverse the impacts will be on the people and wildlife living in and around Oscoda,” Hill wrote.