An exhausted grave digger takes a break after his stint digging the hardened clay into a grave for a suspected COVID-19 victim at a public cemetery, part of which is reserved for suspected COVID-19 victims on Sept. 27, 2020 in Jakarta, Indonesia. Due to a steady rise in Covid-19 cases, Jakarta is running short on hospital beds, quarantine facilities and now graveyard space. (Ed Wray/Getty Images/TNS)
September 29, 2020 Nelson Oliveira - New York Daily News
Share
Tweet
Flip

The relentless health crisis that has upended life around the world has reached another gloomy milestone, with the number of coronavirus deaths surging past 1 million on Monday.

The once-unthinkable death toll, confirmed by Johns Hopkins University, is much higher than the 690,000 lives lost by AIDS or the 400,000 deaths attributed to malaria in all of 2019, according to the Associated Press.

Secretary-General of the United Nations Antonio Guterres lamented the tragic occasion in a tweet Monday evening, saying: “Our world has reached an agonizing milestone: the loss of 1 million lives to #COVID19.” 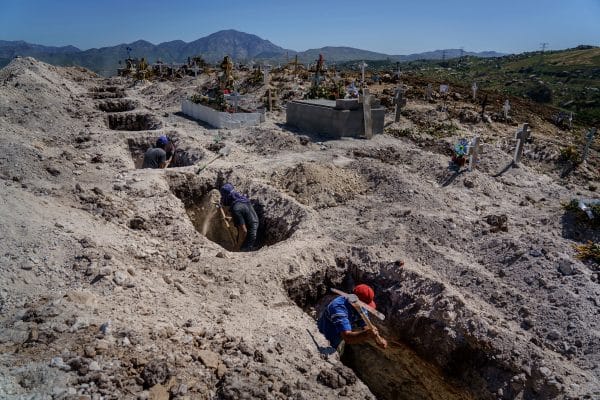 Cemetery workers dig holes ahead of time for a new crop of graves at the -municipal pantheon number 13 cemetery, in Tijuana, Mexico, on April 27, 2020. The global coronavirus death toll has surpassed 1 million. (Marcus Yam/Los Angeles Times/TNS)

He added: “We must never lose sight of each & every life. As the hunt for a vaccine — affordable and available to all — continues, let’s honor their memory by working together to defeat this virus.”

The grim tally comes less than a year after Chinese officials first reported a mysterious pneumonia-like disease in the city of Wuhan, a local health scare that turned into an uncontrollable global pandemic in a matter of weeks and forced much of the world into unprecedented lockdowns.

Within a few months, the United States became the world’s worst hot spot and still remains the leader in COVID-19 infections and fatalities, accounting for more than one-fifth of all deaths — nearly 205,000, as of Monday morning.

But India is now on track to surpass the U.S. in both measures. The South Asian country on Monday became only the second nation to report 6 million cases, about a million fewer than the U.S., and its death toll was approaching 96,000, the third-highest in the world.

Brazil, with the second-highest death toll, has reported more than 140,000 fatalities since the pandemic began spreading earlier this year.

As seasons officially change around the world, with the North Hemisphere transitioning to fall, health experts warn that a second wave is possible. Some countries in Europe are already seeing alarming spikes, including Spain, France and the U.K.

In his address to the United Nations’ General Assembly last week, British Prime Minister Boris Johnson urged world leaders to unite in the fight against coronavirus.

“Never in the history of our species… has the human race been so obsessed with one single topic of conversation,” he said, noting that even though world governments have faced “the same tiny opponent threatening everyone in much the same way,” UN members have waged “193 separate campaigns as if every country somehow contains a different species of human being.”

After nine months of the pandemic, Johnson said, “the very notion of the international community looks, frankly, pretty tattered.”

US State Dept. calls out China for 'empty promises' not to militarize South China Sea