Despite COVID-19, NJ residents say 9/11 memorials should be held to ‘honor the families’

Pat Heidenry sat along Pier A in Hoboken, overlooking New York City just across the water. A good friend of hers died from the attacks on Sept. 11, 2001, and she wants to be able to remember him.

Heidenry is one of a few Hudson County residents who said having 9/11 memorial services is important to them, but COVID-19 safety protocols need to be in place.

“It’s not only to remember what happened, but also give great comfort to those who were affected by it,” Heidenry said.

So far, Hoboken, Secaucus and Jersey City are the only three out of Hudson County’s 12 municipalities which will hold commemorative events this week, remembering the nearly 3,000 lost lives. 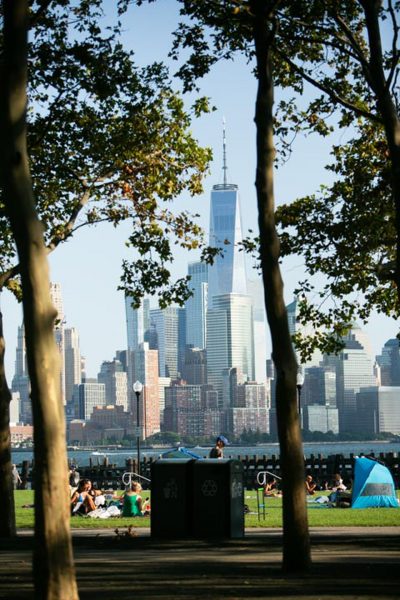 Pier A Park in Hoboken on Sunday, September 6, 2020.
(Michael Dempsey | The Jersey Journal/TNS)

Heidenry, 79, said she always goes to the 9/11 service at All Saints Episcopal Parish on Washington Street. This year, she’s open to attending Friday’s prayer and memorial service while following the proper precautions.

Hoboken’s annual service will take place at 6 p.m. on Pier A. Social distancing and face masks will be mandatory.

Manny Perich, 58, and Matt Kochka, 55, were sitting in Buchmuller Park in Secaucus on Monday. The small outdoor stage behind them was decorated with American flags.

Perich said that safety is first, but the innocent lives that were lost should be honored.

“As a country, we need to come together,” he said. “We’re also fighting our own terrorism. (This virus) is affecting everyone and we need this symbol of hope.” 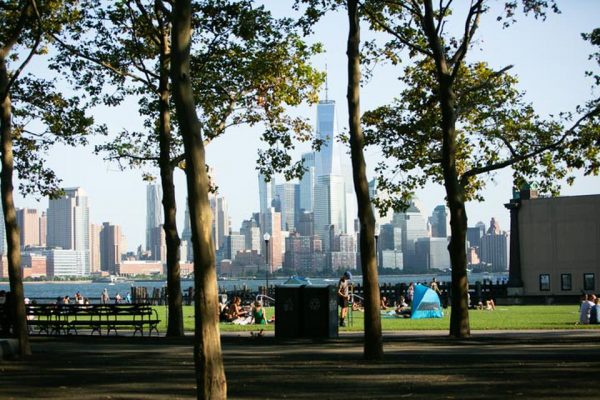 Pier A Park in Hoboken on Sunday, September 6, 2020.
(Michael Dempsey | The Jersey Journal/TNS)

Perich and Kochka suggested attendees should have their temperatures checked before joining the service or that they should get tested beforehand. The two said, as long as guidelines are followed, they’ll attend the service.

Secaucus will be holding its memorial event at 8:30 a.m. at Buchmuller Park on Friday.

But some towns, like Bayonne, are planning to pay their respects in a more subtle way.

Lights will be shone at the Teardrop Memorial from Thursday to Saturday from 9 p.m. to midnight, Mayor Jimmy Davis said. The Bayonne Remembers group will not have its annual ceremony due to coronavirus concerns.

“I hope this tribute serves to remind everyone of the events of that day and inspire us all to live in together, as one, in peace,” Davis said in a statement.

But one lifelong Bayonne resident — who did not provide his name — said the city should have one.

“It’s to honor all the families,” he said. “Not to remind them of what happened, but to acknowledge all that they’ve been through.”

North Bergen will also not hold a public ceremony, but the township plans to install light beams at Waterside Restaurant at its 7800 B River Rd location. The lights will shine from Thursday to Sunday.

Light beams are a common way to pay tribute to 9/11, as it resembles New York City’s Twin Towers.

For Andrew and Irina Lindeberg, Union City residents, they said this year’s commemorative events can wait because of the pandemic.

“But the event itself is not,” Andrew added.

Jersey City will hold an “abbreviated” ceremony on Friday from 8:30 to 9:30 a.m. at the foot of Grand Street near the city waterfront. Red Cross will have its annual Jersey City Police and Fire 9/11 Memorial blood drive from 8 a.m. to 6 p.m. at the Hyatt Regency Hotel at 2 Exchange Place.

A virtual Journal Square 9/11 ceremony will be streamed Friday at 5 p.m. on Hudson Media Group on Livestream, YouTube and Facebook.

Flags will also be planted on the lawn of Brennan Court House on Newark Avenue, representing all those from Hudson County who lost their lives in the attack, county spokesman James Kennelly said.