Video showed rioters inside the building piling flammable materials onto the fire while others blocked the streets around the building.

The police statement said vehicles associated with the group of rioters also illegally blocked off traffic around the building.

“Fire started at the police union HQ in #Portland,” one Twitter user posted.

Fire started at the police union HQ in #Portland 🤯🤯👀 pic.twitter.com/vWG3llnTfN

“Protesters set fire to police union building in Portland as officers declare a riot and deploy chemicals to force crowds to disperse on the 73rd night of unrest in the city,” a Twitter user posted with further footage of the arson efforts at the police union building.

The police statement said officers from the Oregon State Police and the PPB arrived to disperse the crowds.

In one video, police officers could be seen pushing into a shield wall formed by the crowds outside the police union building, pushing to break up the line of makeshift wooden shields.

Police made nine arrests during the Saturday night rioting incidents. Those arrested faced charges including for rioting, interfering with police, disorderly conduct, and resisting arrest. One person, Michael Szabo, 27, was charged with assault on an officer while a second person, Kathleen Mahony, 43, was charged with attempted assault on an officer.

Rioting continued on Sunday, according to a second PPB press release. Crowds again formed around the PPA building on Sunday and again moved dumpsters and fencing into the street.

Rioters reportedly threw commercial-grade fireworks at police on Sunday and at least two officers were injured. One officer suffered burns to her neck and her facemask was partially melted. Another officer sustained a leg injury when a piece of firework hit him. 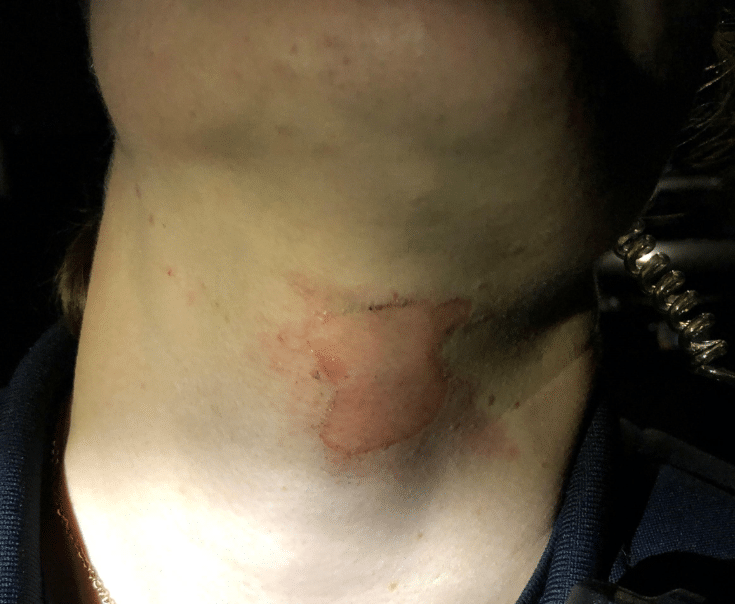 A police officer in Portland, Oregon suffered burns to her neck after being hit by pieces of a firework thrown by rioters on Aug. 9, 2020 (Portland Police Bureau photo/Released)

The roadblocks set up by rioters on Sunday also reportedly blocked fire and ambulance services en route to a medical call, forcing them to reroute to get around the blocked streets.

16 people were arrested Sunday, with charges including for disorderly conduct and interfering with police.